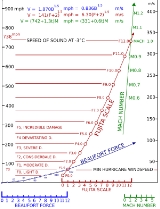 Encyclopedia
The Fujita scale or Fujita-Pearson scale, is a scale for rating tornado
Tornado
A tornado is a violent, dangerous, rotating column of air that is in contact with both the surface of the earth and a cumulonimbus cloud or, in rare cases, the base of a cumulus cloud. They are often referred to as a twister or a cyclone, although the word cyclone is used in meteorology in a wider...
intensity, based primarily on the damage tornadoes inflict on human-built structures and vegetation. The official Fujita scale category is determined by meteorologists (and engineers
Civil engineer
A civil engineer is a person who practices civil engineering; the application of planning, designing, constructing, maintaining, and operating infrastructures while protecting the public and environmental health, as well as improving existing infrastructures that have been neglected.Originally, a...
) after a ground and/or aerial damage survey; and depending on the circumstances, ground-swirl patterns (cycloid
Cycloid
A cycloid is the curve traced by a point on the rim of a circular wheel as the wheel rolls along a straight line.It is an example of a roulette, a curve generated by a curve rolling on another curve....
al marks), radar
Radar
Radar is an object-detection system which uses radio waves to determine the range, altitude, direction, or speed of objects. It can be used to detect aircraft, ships, spacecraft, guided missiles, motor vehicles, weather formations, and terrain. The radar dish or antenna transmits pulses of radio...
tracking, eyewitness
Witness
A witness is someone who has firsthand knowledge about an event, or in the criminal justice systems usually a crime, through his or her senses and can help certify important considerations about the crime or event. A witness who has seen the event first hand is known as an eyewitness...
testimonies, media reports and damage imagery, as well as photogrammetry
Photogrammetry
Photogrammetry is the practice of determining the geometric properties of objects from photographic images. Photogrammetry is as old as modern photography and can be dated to the mid-nineteenth century....
/videogrammetry
Videogrammetry
Videogrammetry is a measurement technology in which the three-dimensional coordinates of points on an object are determined by measurements made in two or more video images taken from different angles. Images can be obtained from two cameras which simultaneously view the object or from successive...
if motion picture recording is available.

The scale was introduced in 1971 by Tetsuya Fujita of the University of Chicago
University of Chicago
The University of Chicago is a private research university in Chicago, Illinois, USA. It was founded by the American Baptist Education Society with a donation from oil magnate and philanthropist John D. Rockefeller and incorporated in 1890...
, who developed the scale together with Allen Pearson
Allen Pearson
Allen Pearson was the Director of the National Severe Storms Forecast Center from 1965–79 and began to collaborate with Dr. Tetsuya Theodore "Ted" Fujita on tornado physical characteristics soon after the 1970 Lubbock Tornado. They bounced ideas off each other and the Fujita scale and later the...
(path length and width additions in 1973), head of the National Severe Storms Forecast Center (predecessor to the Storm Prediction Center
Storm Prediction Center
The Storm Prediction Center , located in Norman, Oklahoma, is tasked with forecasting the risk of severe thunderstorms and tornadoes in the contiguous United States. The agency issues convective outlooks, mesoscale discussions, and watches as a part of this process...
). In the United States, tornadoes from 1973 onward were rated soon after occurrence whereas the scale was applied retroactively to tornado reports from 1950 through 1972 for the National Oceanic and Atmospheric Administration (NOAA)
National Oceanic and Atmospheric Administration
The National Oceanic and Atmospheric Administration , pronounced , like "noah", is a scientific agency within the United States Department of Commerce focused on the conditions of the oceans and the atmosphere...
National Tornado Database. Fujita rated tornadoes from 1916–1992 and Tom Grazulis of The Tornado Project also rated all known significant tornadoes (F2-F5 or causing a fatality) in the U.S. back to 1880. Previously used in most areas outside of Great Britain
Great Britain
Great Britain or Britain is an island situated to the northwest of Continental Europe. It is the ninth largest island in the world, and the largest European island, as well as the largest of the British Isles...
, the Fujita scale was superseded in 2007 by the Enhanced Fujita Scale
Enhanced Fujita Scale
The Enhanced Fujita Scale rates the strength of tornadoes in the United States based on the damage they cause.Implemented in place of the Fujita scale introduced in 1971 by Ted Fujita, it began operational use on February 1, 2007. The scale has the same basic design as the original Fujita scale:...
in the United States.

Though each damage level is associated with a wind speed, the Fujita scale is effectively a damage scale, and the wind speeds associated with the damage listed aren't rigorously verified. The Enhanced Fujita Scale was formulated due to research which suggested that the wind speeds required to inflict damage by intense tornadoes on the Fujita scale are greatly overestimated. A process of expert elicitation
Expert elicitation
In science, engineering, and research, expert elicitation is the synthesis of opinions of experts of a subject where there is uncertainty due to insufficient data or when such data is unattainable because of physical constraints or lack of resources. Expert elicitation is essentially a scientific...
with top engineers and meteorologists resulted in the EF scale wind speeds, however, these are biased to United States construction practices. The EF scale also improved damage parameter descriptions. 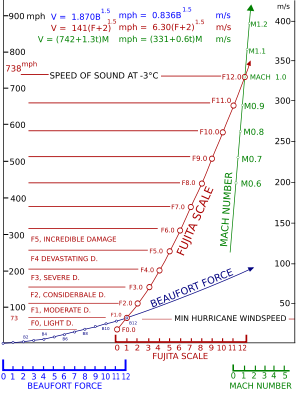 The original scale as derived by Fujita was a theoretical 13-level scale (F0–F12) designed to smoothly connect the Beaufort scale
Beaufort scale
The Beaufort Scale is an empirical measure that relates wind speed to observed conditions at sea or on land. Its full name is the Beaufort Wind Force Scale.-History:...
and the Mach number
Mach number
Mach number is the speed of an object moving through air, or any other fluid substance, divided by the speed of sound as it is in that substance for its particular physical conditions, including those of temperature and pressure...
scale. F1 corresponds to the twelfth level of the Beaufort scale, and F12 corresponds to Mach number 1.0. F0 was placed at a position specifying no damage (approximately the eighth level of the Beaufort scale), in analogy to how the Beaufort's zeroth level specifies little to no wind. From these wind speed numbers, qualitative descriptions of damage were made for each category of the Fujita scale, and then these descriptions were used to classify tornadoes. The diagram on the right illustrates the relationship between the Beaufort, Fujita, and Mach number scales.

At the time Fujita derived the scale, little information was available on damage caused by wind, so the original scale presented little more than educated guesses at wind speed
Wind speed
Wind speed, or wind velocity, is a fundamental atmospheric rate.Wind speed affects weather forecasting, aircraft and maritime operations, construction projects, growth and metabolism rate of many plant species, and countless other implications....
ranges for specific tiers of damage. Fujita intended that only F0-F5 be used in practice, as this covered all possible levels of damage to frame homes as well as the expected estimated bounds of wind speeds. He did, however, add a description for F6, which he phrased as "inconceivable tornado", to allow for wind speeds exceeding F5 and for possible future advancements in damage analysis which might show it.

Furthermore, the original wind speed numbers have since been found to be higher than the actual wind speeds required to incur the damage described at each category. The error manifests itself to an increasing degree as the category increases, especially in the range of F3 through F5. NOAA notes that "... precise wind speed numbers are actually guesses and have never been scientifically verified. Different wind speeds may cause similar-looking damage from place to place—even from building to building. Without a thorough engineering analysis of tornado damage in any event, the actual wind speeds needed to cause that damage are unknown." Since then, the Enhanced Fujita Scale
Enhanced Fujita Scale
The Enhanced Fujita Scale rates the strength of tornadoes in the United States based on the damage they cause.Implemented in place of the Fujita scale introduced in 1971 by Ted Fujita, it began operational use on February 1, 2007. The scale has the same basic design as the original Fujita scale:...
has been created using better wind estimates by engineers and meteorologists.
Some sources add level F+", meaning a tornado with winds below 39 mph; on rare occasions tornadoes this weak are observed covering a wide range of path widths and lengths.

The five categories are listed here, in order of increasing intensity.

NB: Path widths are averages of tornadoes of their Fujita rating and are approximate values; tornado intensity should not be assumed by the size of the damage path. One F5 tornado had a damage path just 90 meters wide at one point.

Since the Fujita scale is based on the severity of damage resulting from high winds, an F6 tornado is a purely theoretical construct. Property damage cannot exceed total destruction, which constitutes an F5. (A tornado with windspeeds greater than 319 miles per hour is theoretically possible, and the 1999 Oklahoma City tornado may have been such an event. However, no such wind speed has ever been recorded and that measurement was not near ground level.)


For purposes such as tornado climatology
Tornado climatology
The United States has the most tornadoes of any country, nearly four times more than estimated in all of Europe, excluding waterspouts. This is mostly due to the unique geography of the continent. North America is a large continent that extends from the tropics north into arctic areas, and has no...
studies, Fujita scale ratings may be grouped into classes.


Decommission in the US

The Fujita scale, introduced in 1971 as a means to differentiate tornado intensity and path area, assigned wind speeds to damage that were, at best, educated guesses. Fujita and others recognized this immediately and intensive engineering analysis was conducted through the rest of the 1970s. This research, as well as subsequent research, showed that tornado wind speeds required to inflict the described damage were actually much lower than the F-scale indicated, particularly for the upper categories. Also, although the scale gave general descriptions for the type of damage a tornado could cause, it gave little leeway for strength of construction and other factors that might cause a building to receive higher damage at lower wind speeds. Fujita tried to address these problems somewhat in 1992 with the Modified Fujita Scale, but by then he was semi-retired and the National Weather Service was not in a position for the undertaking of updating to an entirely new scale, so it went largely unenacted.

In the USA and some other countries, on February 1, 2007, the Fujita scale was decommissioned in favor of what these scientists believe is a more accurate Enhanced Fujita Scale
Enhanced Fujita Scale
The Enhanced Fujita Scale rates the strength of tornadoes in the United States based on the damage they cause.Implemented in place of the Fujita scale introduced in 1971 by Ted Fujita, it began operational use on February 1, 2007. The scale has the same basic design as the original Fujita scale:...
, which replaces it. The EF Scale is thought to improve on the F-scale on many counts—it accounts for different degrees of damage that occur with different types of structures, both man-made and natural. The expanded and refined damage indicators and degrees of damage standardize what was somewhat ambiguous. It also is thought to provide a much better estimate for wind speeds, and sets no upper limit on the wind speeds for the strongest level, EF5. Several countries, including Canada and France, continue to use the original Fujita Scale.