Encyclopedia
Ermenegildo Zegna is a leading Italian
Italy
Italy , officially the Italian Republic languages]] under the European Charter for Regional or Minority Languages. In each of these, Italy's official name is as follows:;;;;;;;;), is a unitary parliamentary republic in South-Central Europe. To the north it borders France, Switzerland, Austria and...
fashion house, specialing in men's clothing. Founded in 1910, it is now managed by the fourth generation of the Zegna family and remains in family ownership. As well as producing suits for its own labels, it manufactures suits for labels such as Gucci
Gucci
The House of Gucci, better known simply as Gucci , is an Italian fashion and leather goods label, part of the Gucci Group, which is owned by French company PPR...
, Yves Saint Laurent
Yves Saint Laurent (brand)
Yves Saint Laurent or YSL is a luxury fashion house founded by Yves Saint Laurent and his partner, Pierre Bergé. Today, its chief designer is Stefano Pilati. Yves Saint Laurent, founder of the brand, died in 2008.-History:...
and Tom Ford
Tom Ford
Thomas Carlyle "Tom" Ford is an American fashion designer and film director. He gained international fame for his turnaround of the Gucci fashion house and the creation of the Tom Ford label before directing the Oscar-nominated film A Single Man.-Early life :Tom Ford was born August 27, 1961 in...
. Effective July 1, 2011 Ermenegildo Zegna has signed an agreement with Estée Lauder Companies Inc. The new license provides Estée Lauder Companies Inc. exclusive global rights to market fragrances and develop new cosmetics under the Ermemengildo Zegna Group's brands, thereby replacing the previous partnership with YSL Beauté. As one of the biggest global producers of fine fabrics (2.3 million metres per year), Zegna has been active in promoting improvements in wool
Wool
Wool is the textile fiber obtained from sheep and certain other animals, including cashmere from goats, mohair from goats, qiviut from muskoxen, vicuña, alpaca, camel from animals in the camel family, and angora from rabbits....
production around the world.

Ermenegildo Zegna founded the company in 1910 in Trivero
Trivero
Trivero is a comune in the Province of Biella in the Italian region Piedmont, located about 80 km northeast of Turin and about 14 km northeast of Biella.It is an important centre of the wool industry....
in the Biellese Prealps
Biellese Prealps
The Biellese Prealps, or prealpi biellesi form an area of the Italian prealps situated to the south of the Pennine Alps. Sometimes they are regarded as a distinct Alpine group, at others as a subgroup of the Pennine Alps....
. Zegna quickly gained a reputation for producing fine quality wool suits, and by the end of the 1930s, the Wool Mill employed 1,000 workers. In 1938 the Zegna Woollens Corporation was set up in New York although exports were not helped by the privations of war.

Ermenegildo died in 1966 at the age of 74. Aldo and Angelo took over the business and two years later they launched a line of ready-made suits, produced in Zegna's factory in Novara
Novara
Novara is the capital city of the province of Novara in the Piedmont region in northwest Italy, to the west of Milan. With c. 105,000 inhabitants, it is the second most populous city in Piedmont after Turin. It is an important crossroads for commercial traffic along the routes from Milan to Turin...
.

Another factory was opened in Spain in 1973 while a Zegna plant opened in Switzerland
Switzerland
Switzerland name of one of the Swiss cantons. ; ; ; or ), in its full name the Swiss Confederation , is a federal republic consisting of 26 cantons, with Bern as the seat of the federal authorities. The country is situated in Western Europe,Or Central Europe depending on the definition....
in 1977, which today employs about 1000 workers. As of 1999, the Zegna Group had eight manufacturing plants in Italy, two in Spain, three in Switzerland, one in Mexico and one in Turkey. While many Zegna suits are factory produced, the majority of premium suits are still made-to-measure.

Aldo died in 2000, but Angelo remains the Honorary President of the company. Oscar-winning actor Adrien Brody
Adrien Brody
Adrien Brody is an American actor and film producer. He received widespread recognition and acclaim after starring in Roman Polanski's The Pianist . Winning the Academy Award for Best Actor in 2003 at age 29, he is the youngest actor to do so...
advertised Zegna's Spring/Summer 2003 and Fall/Winter 2003 lines.

Zegna's range includes fabrics, suits, necktie
Necktie
A necktie is a long piece of cloth worn for decorative purposes around the neck or shoulders, resting under the shirt collar and knotted at the throat. Variants include the ascot tie, bow tie, bolo tie, and the clip-on tie. The modern necktie, ascot, and bow tie are descended from the cravat. Neck...
s, knitwear, shirts, accessories and sportswear.

Ermenegildo Zegna has a yearly output of over 2.3 million meters of fabric, 600,000 sleeve units suits, 1.6 million pieces of sportswear and 1.7 million textile accessories. Zegna employs over 7,000 workers worldwide. The export quota was more than 90% in 2010 divided equally between Europe, Americas and Asia. 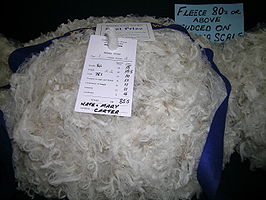 As one of the biggest buyers of ultra-fine Merino
Merino
The Merino is an economically influential breed of sheep prized for its wool. Merinos are regarded as having some of the finest and softest wool of any sheep...
wool, Ermenegildo Zegna has encouraged, supported and rewarded the efforts of the Australian wool industry since 1963 in the production of finer and softer wools. Despite this, the former Australian Prime Minister Paul Keating
Paul Keating
Paul John Keating was the 24th Prime Minister of Australia, serving from 1991 to 1996. Keating was elected as the federal Labor member for Blaxland in 1969 and came to prominence as the reformist treasurer of the Hawke Labor government, which came to power at the 1983 election...
was criticised by the Liberal Party for wearing his favourite Zegna double-breasted suits as it has been a tradition since the 1960s that Australian Prime Ministers wear Anthony Squires suits.

In 2002 the Ermenegildo Zegna Vellus Aureum Trophy was launched for wool that is 13.9 micron and finer. Wool from Australia
Australia
Australia , officially the Commonwealth of Australia, is a country in the Southern Hemisphere comprising the mainland of the Australian continent, the island of Tasmania, and numerous smaller islands in the Indian and Pacific Oceans. It is the world's sixth-largest country by total area...
, New Zealand
New Zealand
New Zealand is an island country in the south-western Pacific Ocean comprising two main landmasses and numerous smaller islands. The country is situated some east of Australia across the Tasman Sea, and roughly south of the Pacific island nations of New Caledonia, Fiji, and Tonga...
, Argentina
Argentina
Argentina , officially the Argentine Republic , is the second largest country in South America by land area, after Brazil. It is constituted as a federation of 23 provinces and an autonomous city, Buenos Aires...
and South Africa
South Africa
The Republic of South Africa is a country in southern Africa. Located at the southern tip of Africa, it is divided into nine provinces, with of coastline on the Atlantic and Indian oceans...
may be entered and a winner is named from each country.

Most Zegna wool suits cost in the US$2,300 - $4,500 range. Price is dependent upon several factors. Zegna's top line is "Couture," formerly known as "Napoli Couture."

"E.Z BY ZEGNA" is a brand started in 1997 in cooperation with Japanese clothing manufacturer Sanyo Shokai. During years of expansion and also thanks to an advertising
Advertising
Advertising is a form of communication used to persuade an audience to take some action with respect to products, ideas, or services. Most commonly, the desired result is to drive consumer behavior with respect to a commercial offering, although political and ideological advertising is also common...
campaign on major media, E.Z BY ZEGNA brand has become an important landmark for young clothing consumers in Japan. The brand is also observed by men's clothing magazines of nearby countries such as China
China
Chinese civilization may refer to:* China for more general discussion of the country.* Chinese culture* Greater China, the transnational community of ethnic Chinese.* History of China* Sinosphere, the area historically affected by Chinese culture...
and Taiwan
Taiwan
Taiwan , also known, especially in the past, as Formosa , is the largest island of the same-named island group of East Asia in the western Pacific Ocean and located off the southeastern coast of mainland China. The island forms over 99% of the current territory of the Republic of China following...
. , there were 25 "E.Z BY ZEGNA" stores across Japan.