Encyclopedia
Dolce & Gabbana (ˌdolʧe e gabˈbaːna) is an Italian luxury industry fashion house
Fashion House
Fashion House is an American telenovela that aired at 9 p.m. ET/8 p.m. CT Monday through Saturday on MyNetworkTV stations. The series premiered on September 5, 2006 and concluded on December 5, 2006...
. The company was started by the Italian designers
Fashion design
Fashion design is the art of the application of design and aesthetics or natural beauty to clothing and accessories. Fashion design is influenced by cultural and social latitudes, and has varied over time and place. Fashion designers work in a number of ways in designing clothing and accessories....
Domenico Dolce and Stefano Gabbana in Milan
Milan
Milan is the second-largest city in Italy and the capital city of the region of Lombardy and of the province of Milan. The city proper has a population of about 1.3 million, while its urban area, roughly coinciding with its administrative province and the bordering Province of Monza and Brianza ,...
, Italy
Italy
Italy , officially the Italian Republic languages]] under the European Charter for Regional or Minority Languages. In each of these, Italy's official name is as follows:;;;;;;;;), is a unitary parliamentary republic in South-Central Europe. To the north it borders France, Switzerland, Austria and...
. By 2005 their turnover was €597 million.

Domenico Dolce was born on September 13, 1958 in Polici Jenerosa, Italy. Stefano Gabbana was born on November 14, 1962 in Venice, and according to some sources in Milan, Italy (Gabbana, Stephano 2007). The two met in Milano in 1980 and worked for the same fashion house. In 1982 they established a designer consulting studio. In time it grew to become the famous fashion house “Dolce & Gabbana”. They presented their first women’s collection in 1985 in Milan, where a year later their store would open its doors in 1986 (Dolce & Gabbana 2011). Two years later they launched their leotard line and in 1989 started designing underwear and swimming costumes (Domenico). Dolce and Gabbana started to export their products in Japan and other countries like the U.S. where they found their own showroom in 1990 (Gabbana, Stephano 2011). The same year they showed their men’s collections. They also launched their first perfume Dolce & Gabbana in 1992 (Dolce & Gabbana 2011). 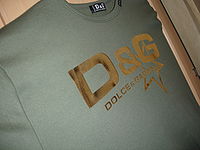 Dolce&Gabbana (spelled without spaces, unlike the name of the company) specializes in luxury items influenced more by designers and is more formal and 'timeless', responding to long-term trends rather than seasonal changes. It also sells sunglasses
Sunglasses
Sunglasses or sun glasses are a form of protective eyewear designed primarily to prevent bright sunlight and high-energy visible light from damaging or discomforting the eyes. They can sometimes also function as a visual aid, as variously termed spectacles or glasses exist, featuring lenses that...
and corrective eyewear, purses, and watches.
In April 2009 it launched its make-up range, unveiled at Selfridges
Selfridges
Selfridges, AKA Selfridges & Co, is a chain of high end department stores in the United Kingdom. It was founded by Harry Gordon Selfridge. The flagship store in London's Oxford Street is the second largest shop in the UK and was opened on 15 March 1909.More recently, three other stores have been...
, London by Scarlett Johansson
Scarlett Johansson
Scarlett Johansson is an American actress, model and singer.Johansson made her film debut in North and was later nominated for the Independent Spirit Award for Best Female Lead for her performance in Manny & Lo . She rose to further prominence with her roles in The Horse Whisperer and Ghost World...
.
In February 2010, it was announced that American
United States
The United States of America is a federal constitutional republic comprising fifty states and a federal district...
singer Madonna
Madonna (entertainer)
Madonna is an American singer-songwriter, actress and entrepreneur. Born in Bay City, Michigan, she moved to New York City in 1977 to pursue a career in modern dance. After performing in the music groups Breakfast Club and Emmy, she released her debut album in 1983...
would design a collection of sunglasses set to be released in May of that year.
It also has a set of fragrances for men and women.

D&G is a slightly more casual line that follows an urban inspiration and attempts to set trends rather than follow them. It is the younger, more flamboyant line of the brand. Unlike Dolce&Gabbana, D&G sells watches as well as clothing. D&G has been voted the UK's best luxury brand and in July 2009 D&G signed a lucrative deal with singer Alexandra Burke
Alexandra Burke
Alexandra Imelda Cecelia Ewen Burke is a British R&B and pop recording artist who rose to fame after winning the fifth series of British television series The X Factor in 2008...
which will see her model its fashion lines in her music videos and in promotions. D&G is scheduled to be discontinued after its Spring 2012 season.

Originally inspired by eclectic, thrift shop Bohemia, Dolce & Gabbana's deeply colored, animal prints have been described as "haute hippy dom" taking inspiration in particular from Italy's prestigious film history. "When we design it's like a movie (Domenico)," says Domenico Dolce. "We think of a story and we design the clothes to go with it (Domenico)." They claim to be more concerned about creating the best, most flattering clothes than sparking trends, once admitting that they wouldn't mind if their only contribution to fashion history was a black bra (Dolce and Gabbana 2007).

D&G trademarks include underwear-as-outerwear (such as corsets and bra fastenings), gangster boss pinstripe suits, and extravagantly printed coats. Meanwhile their feminine collections are always backed by powerful ad campaigns, like the black-and-white ads, featuring model Marpessa photographed by Ferdinando Scianna in 1987 (Dolce & Gabbana). But fundamentally they are known for making women look, quite simply, sexy. "They find their way out of any black dress, any buttoned-up blouse (Domenico)," says Rossellini. "The first piece of theirs I wore was a white shirt, very chaste, but cut to make my breasts look as if they were bursting out of it (Domenico)."

Once dubbed the "Gilbert and George of Italian fashion", Dolce and Gabbana gave their fashion interests a musical turn in 1996, by recording their own single, in which they intoned the words "D&G is love" over a techno beat (Dolce & Gabbana 2011). Newer to the design game than other heavyweight Italian fashion houses such as Versace and Armani, the pair acknowledge that luck has played its part in their phenomenal success. By 1997, their company reported a turnover of 400 million, prompting both designers to announce that they planned to retire by the age of 40 - a promise they happily did not keep (Domenico). 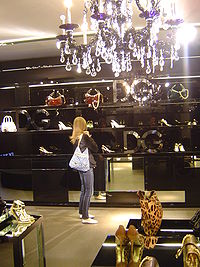 
Dolce & Gabbana also has kiosks in several department stores, including Bergdorf Goodman
Bergdorf Goodman
Bergdorf Goodman is a luxury goods department store based on Fifth Avenue in Midtown Manhattan in New York City. The company was founded in 1899 by Herman Bergdorf and was later owned and managed by Edwin Goodman, and later his son Andrew Goodman....
, Lord and Taylor, Nordstrom
Nordstrom
Nordstrom, Inc. is an upscale department store chain in the United States, founded by John W. Nordstrom and Carl F. Wallin. Initially a shoe retailer, the company today also sells clothing, accessories, handbags, jewelry, cosmetics, fragrances, and in some locations, home furnishings...
, Neiman Marcus
Neiman Marcus
Neiman Marcus, formerly Neiman-Marcus, is a luxury specialty retail department store operated by the Neiman Marcus Group in the United States. The company is headquartered in the One Marcus Square building in Downtown Dallas, Texas, and competes with other department stores such as Saks Fifth...
and Saks Fifth Avenue
Saks Fifth Avenue
Saks Fifth Avenue is a luxury American specialty store owned and operated by Saks Fifth Avenue Enterprises , a subsidiary of Saks Incorporated. It competes in the high-end specialty store market in the Upper East Side of Manhattan, i.e. 'the 3 B's' Bergdorf, Barneys, Bloomingdale's and Lord & Taylor...
, and plans to expand into the American cities of Atlanta, Chicago
Chicago
Chicago is the largest city in the US state of Illinois. With nearly 2.7 million residents, it is the most populous city in the Midwestern United States and the third most populous in the US, after New York City and Los Angeles...
, Dallas, Boston
Boston
Boston is the capital of and largest city in Massachusetts, and is one of the oldest cities in the United States. The largest city in New England, Boston is regarded as the unofficial "Capital of New England" for its economic and cultural impact on the entire New England region. The city proper had...
, San Francisco, and Washington D.C.

New Zealand
Although there are no dedicated stores in New Zealand
New Zealand
New Zealand is an island country in the south-western Pacific Ocean comprising two main landmasses and numerous smaller islands. The country is situated some east of Australia across the Tasman Sea, and roughly south of the Pacific island nations of New Caledonia, Fiji, and Tonga...
the brand is becoming increasingly popular with the brand becoming more and more available through online shopping.

Following complaints from consumers' groups in February 2007, Dolce & Gabbana pulled an advertisement in Madrid, Spain and Paris, France that showed a man holding a woman to the ground by her wrists while a group of men look on. Spain's Labour and Social Affairs Ministry branded the campaign as illegal and humiliating to women, saying the woman's body position had no relation to the products Dolce & Gabbana was trying to sell. Italian publications followed suit, banning the ad. This advertisement has been called "a glorification of gang rape" by many, and has been declared "One of the Most Controversial Advertisements in Fashion History," by Debonair Magazine
Debonair Magazine (U.S.)
Debonair Magazine is an American men's magazine. Debonair Magazine features articles predominantly about men's fashion and grooming and is syndicated to other media outlets....
.

Dolce & Gabbana made the "DG" logo an iconic symbol, but they were never able to get the matching internet address DG.com.
In fact, DG.com is one of the oldest Internet domains and was already registered in 1986 by the computer company Data General
Data General
Data General was one of the first minicomputer firms from the late 1960s. Three of the four founders were former employees of Digital Equipment Corporation. Their first product, the Data General Nova, was a 16-bit minicomputer...
, now defunct. DG.com was purchased in June 2010 by the US Variety Store chain Dollar General
Dollar General
Dollar General Corp. is a U.S. chain of variety stores headquartered in Goodlettsville, Tennessee. As of January 2011, Dollar General operated over 9,300 stores in 35 U.S. states....
which uses a different DG logo to sell its products.

In May 2009, the Italian government charged Dolce & Gabbana with tax evasion
Tax evasion
Tax evasion is the general term for efforts by individuals, corporations, trusts and other entities to evade taxes by illegal means. Tax evasion usually entails taxpayers deliberately misrepresenting or concealing the true state of their affairs to the tax authorities to reduce their tax liability,...
for having moved assets for about 249 million euro to tax haven Luxembourg
Luxembourg
Luxembourg , officially the Grand Duchy of Luxembourg , is a landlocked country in western Europe, bordered by Belgium, France, and Germany. It has two principal regions: the Oesling in the North as part of the Ardennes massif, and the Gutland in the south...
in the 2004-2006 period.