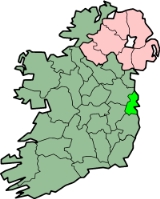 Encyclopedia
County Dublin is a county
Counties of Ireland
The counties of Ireland are sub-national divisions used for the purposes of geographic demarcation and local government. Closely related to the county is the County corporate which covered towns or cities which were deemed to be important enough to be independent from their counties. A county...
in Ireland
Republic of Ireland
Ireland , described as the Republic of Ireland , is a sovereign state in Europe occupying approximately five-sixths of the island of the same name. Its capital is Dublin. Ireland, which had a population of 4.58 million in 2011, is a constitutional republic governed as a parliamentary democracy,...
. It is part of the Dublin Region
Dublin Region
The Dublin Region is a NUTS Level III region of Ireland and is governed by the Dublin Regional Authority. It consists of the area under the jurisdiction of the county councils of Dun Laoghaire-Rathdown, Fingal and South Dublin, as well as Dublin City Council. The Dublin Region has an area of...
and is also located in the province
Provinces of Ireland
Ireland has historically been divided into four provinces: Leinster, Ulster, Munster and Connacht. The Irish word for this territorial division, cúige, literally meaning "fifth part", indicates that there were once five; the fifth province, Meath, was incorporated into Leinster, with parts going to...
of Leinster
Leinster
Leinster is one of the Provinces of Ireland situated in the east of Ireland. It comprises the ancient Kingdoms of Mide, Osraige and Leinster. Following the Norman invasion of Ireland, the historic fifths of Leinster and Mide gradually merged, mainly due to the impact of the Pale, which straddled...
. It is named after the city of Dublin which is the capital
Capital City
Capital City was a television show produced by Euston Films which focused on the lives of investment bankers in London living and working on the corporate trading floor for the fictional international bank Shane-Longman....
of Ireland. County Dublin was one of the first of the parts of Ireland to be shired
Shire
A shire is a traditional term for a division of land, found in the United Kingdom and in Australia. In parts of Australia, a shire is an administrative unit, but it is not synonymous with "county" there, which is a land registration unit. Individually, or as a suffix in Scotland and in the far...
by King John of England
John of England
John , also known as John Lackland , was King of England from 6 April 1199 until his death...
following the Norman invasion of Ireland
Norman Invasion of Ireland
The Norman invasion of Ireland was a two-stage process, which began on 1 May 1169 when a force of loosely associated Norman knights landed near Bannow, County Wexford...
. The area of the county no longer has a single local authority; local government is now split between three authorities. The population of the county at large, which includes Dublin city, was 1,270,603 according to the census of 2011.

The area lost its county
County
A county is a jurisdiction of local government in certain modern nations. Historically in mainland Europe, the original French term, comté, and its equivalents in other languages denoted a jurisdiction under the sovereignty of a count A county is a jurisdiction of local government in certain...
status in 1994, with Section 9 Part 1(a) of the Local Government (Dublin) Act, 1993 stating that "the county shall cease to exist." At that time, and in response to a European Council report highlighting Ireland as the most centralised country in the European Union
European Union
The European Union is an economic and political union of 27 independent member states which are located primarily in Europe. The EU traces its origins from the European Coal and Steel Community and the European Economic Community , formed by six countries in 1958...
, it was decided that a single County Dublin was unmanageable and undemocratic from a local government
Local government
Local government refers collectively to administrative authorities over areas that are smaller than a state.The term is used to contrast with offices at nation-state level, which are referred to as the central government, national government, or federal government...
perspective. In discussing the legislation to dissolve Dublin County Council, Avril Doyle
Avril Doyle
Avril Doyle is a former Irish politician. She was a member of Fine Gael, part of the European People's Party.Avril Belton was born in Dublin and was educated at University College Dublin. Her father Richard Belton was a Senator and her grandfather Patrick Belton was a Teachta Dála...
TD
Teachta Dála
A Teachta Dála , usually abbreviated as TD in English, is a member of Dáil Éireann, the lower house of the Oireachtas . It is the equivalent of terms such as "Member of Parliament" or "deputy" used in other states. The official translation of the term is "Deputy to the Dáil", though a more literal...
said, "The Bill before us today effectively abolishes County Dublin, and as one born and bred in these parts of Ireland I find it rather strange that we in this House are abolishing County Dublin. I am not sure whether Dubliners realise that that is what we are about today, but in effect that is the case." 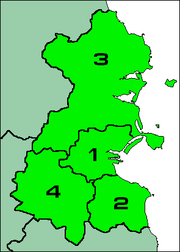 A corporate body for the government of the city with a status of county borough
County borough
County borough is a term introduced in 1889 in the United Kingdom of Great Britain and Ireland , to refer to a borough or a city independent of county council control. They were abolished by the Local Government Act 1972 in England and Wales, but continue in use for lieutenancy and shrievalty in...
has existed for centuries. Dublin County Council
Dublin County Council
Dublin County Council was a local authority for the administrative county of County Dublin in the Republic of Ireland. It was established by the Local Government Act 1898....
was abolished in 1994 and was replaced by three new county councils. In summary, the local authority
Local government
Local government refers collectively to administrative authorities over areas that are smaller than a state.The term is used to contrast with offices at nation-state level, which are referred to as the central government, national government, or federal government...
divisions within the Dublin Region are the following:


Most of the area can receive the five main UK television channels on analogue television as well as the main Irish channels, along with Sky TV and UPC cable television.