Encyclopedia
Palmerstown occasionally referred to as Palmerston, is a suburb of Dublin,
Ireland
Republic of Ireland
Ireland , described as the Republic of Ireland , is a sovereign state in Europe occupying approximately five-sixths of the island of the same name. Its capital is Dublin. Ireland, which had a population of 4.58 million in 2011, is a constitutional republic governed as a parliamentary democracy,...
. It is located about 8km west of the city centre, in the administrative county of South Dublin
South Dublin
South Dublin is a county in Ireland. It is one of three smaller counties into which County Dublin was divided in 1994. The county seat is Tallaght, the largest suburb of Dublin and the biggest urban centre in the county. Other important centres of population are Lucan and Clondalkin...
. The area is bordered to the north by the River Liffey
River Liffey
The Liffey is a river in Ireland, which flows through the centre of Dublin. Its major tributaries include the River Dodder, the River Poddle and the River Camac. The river supplies much of Dublin's water, and a range of recreational opportunities.-Name:The river was previously named An Ruirthech,...
, to the west by Lucan, to the south by Ballyfermot
Ballyfermot
Ballyfermot is a suburb in the city of Dublin.Celebrities such as the famous Furey Brothers and the brilliant Keenan family have all resided in Ballyfermot.Ireland, located 7 kilometres due west from the city centre, and to the south of the Phoenix Park...
and to the
east by the village of Chapelizod
Chapelizod
Chapelizod is a picturesque Irish village preserved within the city of Dublin, Ireland. It lies in the verdant wooded valley of the River Liffey, on the way to the slopes of the Strawberry Beds, below the Phoenix Park. The village is associated with Iseult of Ireland and the location of Iseault's...
, the south-bank area of which lies in Palmerstown. The village is situated near the Liffey Valley Shopping Centre
Liffey Valley Shopping Centre
Liffey Valley Shopping Centre is a shopping centre, that is located in Clondalkin in Dublin 22. The centre opened in 1998 and is located at the junction of the M50 motorway and N4 road...
, east of the junction of the M50 and the N4.

The area is situated near the major junction of the M50 motorway
M50 motorway (Ireland)
The M50 motorway is a motorway in Ireland running in a C-shaped ring around the north-eastern, northern, western and southern sides of the capital city, Dublin. The northern end of the route is located at the entrance to the Dublin Port Tunnel. Anti-clockwise it heads northwest through the tunnel...
N4
N4
N4, N-4, N.4, or N04 may refer to:* , an unstable molecule of nitrogen.* Washburn N4, an electric guitar* N4 Markup Language* N°4, a shortening for Number Four* N4, a postcode district in the N postcode area...
. Old Lucan Road, once the main route from the city to the West, passes through the centre of Palmerstown Village.

The main public transport is Dublin Bus running via the N4. Scheduled services run east to the city, and west to Lucan, Celbridge
Celbridge
Celbridge is a town and townland on the River Liffey in County Kildare, Ireland. It is west of Dublin. As a town within the Dublin Metropolitan Area and the Greater Dublin Area, it is located at the intersection of the R403 and R405 regional roads....
, Leixlip
Leixlip
-Politics:Since 1988 Leixlip has had a nine member Town Council , headed by a Cathaoirleach , which has control over many local matters, although it is limited in that it is not also a planning authority...
and Maynooth
Maynooth
Maynooth is a town in north County Kildare, Ireland. It is home to a branch of the National University of Ireland, a Papal University and Ireland's main Roman Catholic seminary, St. Patrick's College...
. The Palmerstown Route(26) travels from the Cherry Orchard Hospital to Dublin city via Kennelsfort Road. Route (18), a circular city route runs from the Old Lucan Road to Donnybrook via many south Dublin suburbs including Walkinstown, Crumlin, KCR and Rathgar.

Palmerstown railway station opened in November 1881 and closed on 13 April 1940.There have been talks of a new rail line being set up and run in the area however nothing has been confirmed.

The civil parish of Palmerstown is the most northerly parish in the Barony of Uppercross, County Dublin. Much of Palmerstown has been developed for residential, transportation and commercial purposes over the last half century.

Many of Palmerstown's local amenities are located in a cluster along the old Lucan Road, the old (N4)route from Dublin to Kinnegad. It straddles the ancient western highway which borders Palmerstown Upper and Palmerstown Lower. Robin Villas and Hollyville were labourers' cottages built at the beginning of the last century. The old national school is now a community centre. Stewarts Hospital, (formerly the residence of the Hely-Hutchinson
Hely-Hutchinson
The name Hely-Hutchinson or Hely Hutchinson may refer to:The Earls of Donoughmore:*Christiana Hely-Hutchinson, 1st Baroness Donoughmore , Irish peer*Richard Hely-Hutchinson, 1st Earl of Donoughmore , Irish peer...
family, the Roman Catholic Church of St. Philomena, the National School, the Palmerstown House Pub and Restaurant and a variety of general enterprises, including a bank and convenience stores are located here.Stewartscare is an old health care facility at the Stewarts buildings and grounds which overlook the meandering Liffey valley. The Stewarts complex houses the administration of the Irish Health Service Executive
Health Service Executive
The Health Service Executive is responsible for the provision of healthcare providing health and personal social services for everyone living in Ireland, with public funds. The Executive was established by the Health Act, 2004 and came into official operation on January 1, 2005...
. . Stewarts Sports and Leisure centre is open to the general public. It also hosts an annual summer camp.

This is the location of 'old' Palmerstown'. Not really so old, this term refers to the fact that this was the first modern housing development built in Palmerstown. This estate was constructed on a Redcow Farm townland farm property between 1955 and 1965. Bounded by Wheatfield and Kennelsfort Roads, and by the N4, it boasts on Manor Road its own strip mall complete with newsagents, hairdressers, fast food takeaways, the local credit union and a doctor's surgery. To the east of Redcow Farm is Glenaulin Park, the well maintained home of St. Patricks GAA club
St. Patricks GAA Palmerstown
St. Patricks are a Gaelic Athletic Association club located in Chapelizod and Palmerstown Dublin, Ireland.Today the club are among the best in the Dublin.The club was founded in 1961 and took its name because that was the Patrician year. The club colours came about as one of the founders, Peter...
and Palmerstown United F.C.

Mill Lane leads to the original Palmerstown settlement and centre of industry, which once employed over 600 millhands, craftsmen, and labourers.
This seventeenth-century low-lying waterside industrial village was complete with flax, seed, oil, and flour mills. The ruin of a pre-Norman church and the remains of the once prosperous thriving community are situated near the river. A small ferry crossed the Liffey here, to where the Wren's Nest pub was situated on the North side. A well-kept football ground opposite the river Liffey is home to Palmerstown Rangers F.C. 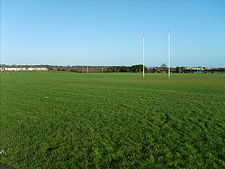 The townland of Woodfarm Acres was mostly farmland. A few council cottages previously existed on the site. This large housing development was built during the 1970s. The estate is bounded by the M50 motorway and N4. Adjacent to Woodfarm Acres is another shopping centre containing a local SuperValu
SuperValu (Ireland)
SuperValu is a supermarket chain in Ireland and Spain, owned by the Musgraves wholesaler firm. Its headquarters is located in Cork and has stores across the entirety of Ireland.-Company structure:...
market, a bowling alley, an Xtra-vision
Xtra-vision
Xtra-vision is Ireland's largest chain of video rental stores , founded in 1979 by Richard Murphy. It was previously operated by US company Blockbuster. As of August 2009 it is operated by Irish investment group Birchhall Investments....
video store, hair salons, and Wheelspin. Access to the local cemetery is adjacent to this centre. The Silver Granite Pub is located nearby, as is a petrol station and Pobalscoil Isolde, a secondary-level community school which opened in the 1980s.

The Oakcourt housing estate in Palmerstown, South Dublin 20 lies in the western part of the 59-acre Johnstown townland, behind Pobalscoil Iosolde
Pobalscoil Iosolde
Pobalscoil Iosolde is a secondary level school in Palmerstown, Dublin, Ireland.-External links:*...
. It was originally developed in the '70s and additional housing was erected in the mid 90's.
The Johnstown townland extends due west from the Georgian Johnstown House (now St. John's College) on Le Fanu Rd. It runs west to Kennelsfort Road and lies between St. Laurence townland (the St. Laurence House is now the West County Hotel) from the River Liffey and Chapelizod in the north, to Ballyfermot Upper/Blackditch on the south.

The built-up Drumfin electoral District between Le Fanu Road and the Drumfin/Glenaulin Park GAA and Soccer pitches, is now part of Ballyfermot in Dublin City 10.