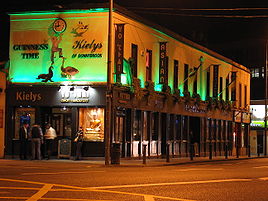 Donnybrook is a district of Dublin, Ireland
Republic of Ireland
Ireland , described as the Republic of Ireland , is a sovereign state in Europe occupying approximately five-sixths of the island of the same name. Its capital is Dublin. Ireland, which had a population of 4.58 million in 2011, is a constitutional republic governed as a parliamentary democracy,...
. It is situated on the southside
Southside (Dublin)
The Southside is not an official administrative area but a colloquial term referring to the area of County Dublin bounded to the north by the River Liffey to the east by Dublin Bay, to the south and west by the boundaries of County Dublin...
of the city, in the Dublin 4
Dublin 4
Dublin 4 is a postal district of Dublin, Ireland including the suburbs of Sandymount, Ballsbridge, Donnybrook, Ringsend and Irishtown on the South side of Dublin....
postal district, and is home to the Irish state broadcaster RTÉ
Raidió Teilifís Éireann
Raidió Teilifís Éireann is a semi-state company and the public service broadcaster of Ireland. It both produces programmes and broadcasts them on television, radio and the Internet. The radio service began on January 1, 1926, while regular television broadcasts began on December 31, 1961, making...
. It was once part of the Pembroke Township
Pembroke Township
Pembroke Township was an area adjoining the City of Dublin, Ireland formed for local government purposes by private Act of Parliament in 1863. The township took its name from the fact that most of the area was part of the estate of the Earl of Pembroke. The township was governed by commissioners...
. Its neighbouring suburbs are Ballsbridge
Ballsbridge
Ballsbridge is a suburb of Dublin, Ireland, named for the bridge spanning the River Dodder on the south side of the city. The sign on the bridge still proclaims it as "Ball's Bridge" in recognition of the fact that the original bridge in this location was built and owned by a Mr...
, Sandymount
Sandymount
Sandymount is a coastal seaside suburb in Dublin 4 on the Southside of Dublin in Ireland. It is in the Dublin South East Dáil constituency and the East Pembroke Ward. It was once part of Pembroke Township, which took its name from the fact that this area was part of the estate of the Earl of...
, Ranelagh
Ranelagh
Ranelagh is a residential area and urban village on the south side of Dublin, Ireland. It is in the postal district of Dublin 6. It is in the local government electoral area of Rathmines and the Dáil Constituency of Dublin South-East.-History:...
and Clonskeagh
Clonskeagh
Clonskeagh or Clonskea , is a southern suburb of Dublin, Ireland. The district straddles the River Dodder.-Location and access:Whilst located fully within the traditional County Dublin, Clonskeagh lies partially within the administrative area of Dublin City Council but mostly in that of Dun...
.

Donnybrook was once the location of Donnybrook Fair
Donnybrook Fair
Donnybrook Fair was a fair that used to be held in Donnybrook, Dublin from the 13th century until the 1850s. It has given its name to an Irish jig, a broadsheet ballad, and a slang term for a brawl or riot.-History:...
, a fair
Fair
A fair or fayre is a gathering of people to display or trade produce or other goods, to parade or display animals and often to enjoy associated carnival or funfair entertainment. It is normally of the essence of a fair that it is temporary; some last only an afternoon while others may ten weeks. ...
held from the time of King John
John of England
John , also known as John Lackland , was King of England from 6 April 1199 until his death...
onwards, which became notorious for drunkenness and violent disorder. This gave rise to the term a donnybrook, meaning a brawl or fracas. The fair was banned in 1855, but a supermarket called Donnybrook Fair is on the main street. Parts of the lands on which Donnybrook Fair took place are occupied by Donnybrook Rugby Ground
Donnybrook Rugby Ground
Donnybrook Stadium is a rugby union stadium in Donnybrook, Dublin 4, Ireland.- Usage :The ground is the former home stadium of Leinster Rugby and they still play friendly games in Donnybrook...
and Herbert Park
Herbert Park
Herbert Park is the name of a road and a public park in Ballsbridge, Dublin.-History:The land used for the park was given to the city by the Earl of Pembroke whose family name was Herbert. In 1907, the World Fair known as the Irish International Exhibition was held in Ballsbridge...
.

Rugby clubs Bective Rangers
Bective Rangers
Bective Rangers is a rugby union club in Dublin, Ireland founded in 1881.The Club is affiliated to the Leinster Branch of the Irish Rugby Football Union and play in Division 2 of the All Ireland League....
and Old Wesley
Old Wesley
Old Wesley Rugby Football Club was founded in 1891 from the past pupils of Wesley College, Dublin. Since then it has become one of Leinster's most famous clubs. The club won the Leinster Senior Cup in 1909 and 1985 as well as winning the AIL Division 2 title in 1989...
have their home ground in Donnybrook Stadium. During the school year secondary schools such as St Conleth's College
St Conleth's College
St. Conleth's College is a fee-paying Catholic school in Dublin, Ireland, founded in 1939, by Bernard Sheppard, who ran the school from 16 Clyde Road until due to demand the school was upgraded to the larger premises at 28 Clyde Road....
, Blackrock, Belvedere College
Belvedere College
Belvedere College SJ is a private secondary school for boys located on Great Denmark Street, Dublin, Ireland. It is also known as St. Francis Xavier's College....
, Clongowes, St. Michaels and many more play rugby in Donnybrook Stadium.

Belmont Football Club has its home ground in Herbert Park.

Merrion Cricket Club is located in Donnybrook, off Anglesea Road and backing on to the Dodder.