Encyclopedia
Kilbarrack is a residential suburb of Dublin, Ireland
Ireland
Ireland is an island to the northwest of continental Europe. It is the third-largest island in Europe and the twentieth-largest island on Earth...
, running inwards from the coast, about 8 km (5 mi) from the city's centre. Modern-day Kilbarrack is within the jurisdiction of Dublin City Council
Dublin City Council
Dublin City Council is the local authority for the city of Dublin in Ireland. It has 52 members and is the largest local authority in Ireland. Until 2001, it was known as Dublin Corporation.-Legal status:...
, with part of its old lands now in Donaghmede
Donaghmede
Donaghmede is a residential suburb of Dublin, in the province of Leinster, Ireland.-Location:Donaghmede is situated approximately to the north east of the Dublin city centre, and is in the constituency of Dublin North East...
, and part in Bayside
Bayside, Dublin
Bayside is a small modern residential Northside suburb of Dublin, Ireland.-Location and access:Bayside is located close to the sea and about 10 km north-east of the city centre, on the coast inshore from North Bull Island...
under Fingal County Council
Fingal County Council
Fingal County council is the local authority for the county of Fingal in Ireland. It is one of three local authorities that comprised the former Dublin County Council before its abolition and one of four councils in the Dublin Region. The county seat is in Swords, with another major office...
jurisdiction.

Kilbarrack is situated on the Northside
Northside (Dublin)
The Northside is the area in County Dublin, Ireland bounded to the south by the River Liffey to the east by Dublin Bay, to the north and west by the boundaries of County Dublin.- Introduction :...
of the city, between the suburbs of Raheny
Raheny
Raheny is a northern suburb of Dublin, the capital city of Ireland. It is an old area, centred around an old village, and is referenced back to 570 AD but after years of light settlement, with a main village and a coastal hamlet, grew rapidly in the 20th century, and is now a mid-density...
, Donaghmede
Donaghmede
Donaghmede is a residential suburb of Dublin, in the province of Leinster, Ireland.-Location:Donaghmede is situated approximately to the north east of the Dublin city centre, and is in the constituency of Dublin North East...
and Bayside
Bayside, Dublin
Bayside is a small modern residential Northside suburb of Dublin, Ireland.-Location and access:Bayside is located close to the sea and about 10 km north-east of the city centre, on the coast inshore from North Bull Island...
(the latter was formed from Kilbarrack's old core). It originally bordered Sutton, Dublin
Sutton, Dublin
Sutton is a residential suburb of Dublin's Northside, Ireland, at the base of Howth Head, the peninsula which forms the northern edge of Dublin Bay.-Location and geography:...
also, and the coastal part may still do so. Its coastal area faces North Bull Island across the water known as Raheny Lake or Crab Water.

Kilbarrack is accessible from the coast road and the Tonlegee Road, by its own station on the (DART) Dublin Area Rapid Transit
Dublin Area Rapid Transit
The Dublin Area Rapid Transit is part of the suburban railway network in Ireland, running mainly along the coastline of Dublin Bay on the Trans-Dublin route, from Greystones in County Wicklow, through Dublin to Howth and Malahide in County Dublin.Trains are powered via a 1500V DC overhead catenary...
suburban rail system (as well as from Raheny and Howth Junction stations), and by Dublin Bus
Dublin Bus
Dublin Bus is a public transport operator in Ireland. It operates an extensive bus network of 172 radial, cross-city and peripheral routes and 18 night routes in the city of Dublin and the Greater Dublin Area. The company, established in 1987, is a subsidiary of Córas Iompair Éireann which is...
(in 2007, routes 17A, to Finglas
Finglas
-See also:* List of towns and villages in Ireland* List of abbeys and priories in Ireland...
, and 31/A/B and 32/A/B, from the city centre to more remote suburbs). It is around 5 km (3.1 mi) from the M1 and M50 motorways and 7 km from Dublin Airport
Dublin Airport
Dublin Airport, , is operated by the Dublin Airport Authority. Located in Collinstown, in the Fingal part of County Dublin, 18.4 million passengers passed through the airport in 2010, making it the busiest airport in the Republic of Ireland, followed by Cork and Shannon...
. Kilbarrack railway station
Kilbarrack railway station
Kilbarrack railway station , in Kilbarrack, a suburb of Dublin city, serves Kilbarrack and parts of Raheny and Donaghmede.The station opened on 1 June 1969.-External links:* *...
opened on 1 June 1969. 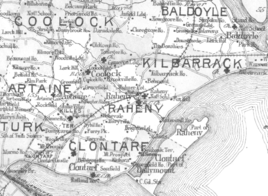 Kilbarrack is an old district, whose name can be found on maps and sea charts, many held at Dublin City Archive
Dublin City Public Libraries and Archive
Dublin City Public Libraries represents the largest library authority in the Republic of Ireland, serving over half a million people through a network of 41 branch libraries and service points....
, going back several hundred years. It was historically a large area of fields, many being 'grange' lands held by Dublin church establishments, with small settlements. Over time, two hamlets
Hamlet (place)
A hamlet is usually a rural settlement which is too small to be considered a village, though sometimes the word is used for a different sort of community. Historically, when a hamlet became large enough to justify building a church, it was then classified as a village...
emerged, Kilbarrack proper, near the seafront, close to the still-extant Kilbarrack Church and Graveyard complex (illustrated below), and Little Kilbarrack, on the road inland (now Tonlegee Road).

The district is crossed by one of Dublin's small waterways, the Kilbarrack Stream or Donough Water, which enters the sea in two branches.

The coastal church ("mapped as Kilbarrack Church, in ruins") and surrounding graveyard were a point of call for mariners, and the church is noted in some records as the Chapel of Mone. At one time, ships entering Dublin Bay paid monies to the city authorities towards the upkeep of the chapel. The cemetery, which still accepts burials in existing graves, includes the grave of the "Sham Squire."

The site of Kilbarrack hamlet, and the part of the district bounding Sutton and Baldoyle, are now together known as Bayside (from inside Kilbarrack Road to Baldoyle Road), while today's Kilbarrack, and the Greendale shopping and civic complex, are close to where Little Kilbarrack stood. The Tesco-led shopping centre is near the site of the former "big house" of the area, Kilbarrack House.

In the 1970s, Swans Nest Court, a complex of tower blocks of flats was built by Dublin Corporation. It was demolished and redeveloped into social and affordable housing in the early 2000s after it fell into disrepair.

Kilbarrack has a local office of Dublin City Council
Dublin City Council
Dublin City Council is the local authority for the city of Dublin in Ireland. It has 52 members and is the largest local authority in Ireland. Until 2001, it was known as Dublin Corporation.-Legal status:...
, two shopping precincts (Greendale, with a large Centra, and Kilbarrack, dominated by Tesco, which has renovated it twice over the last decade) and a range of shops and pubs. There is a major Health Services Executive centre, and, at the boundary with Raheny and Donaghmede, a Municipal Fire Station and practice yard.

Kilbarrack has five primary schools, three in one grouping: Scoil Eoin, the Educate Together North Bay School and Gaelscoil Mide, previously of Donaghmede, and two in another group: St. Benedict's and St. Mary's, located beside St. Benedict's parish church.