An early name for the area was Scal'd Hill or Scald Hill. During the 18th Century, there was a village called Brickfield Town on the site of Sandymount Green. This took its name from Lord Merrions Brickfields which stretched from here to Merrion at the time. 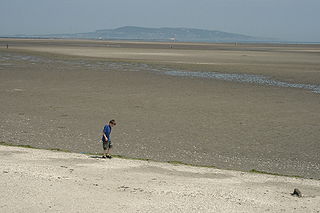 Sandymount is located between 3.5 and 5 km south east of Dublin City, In the north end it begins where Newbridge Avenue meets Herbert Road to Church Avenue at the coast and west along the DART rail line and south to Merrion Gates. Sandymount Promenade runs along the coast road (Strand Road) from Sandymount Strand
Sandymount Strand
Sandymount Strand is a large strand on the east coast of Ireland, adjacent to the village and suburb of Sandymount in Dublin. The strand, which is part of the South Bull, is a major component of the south side of Dublin Bay.Sandymount Strand is a popular place for locals to take a walk...
down to Merrion Gates
Merrion Gates
The area called Merrion Gates, in Sandymount, Dublin 4, is roughly where the northbound Dublin DART line goes inland before the station at Sydney Parade, which lies to the north. Booterstown DART station is the nearest to the south. The lands of the School for the Visually Impaired are here...
. It lies a little south of the Great South Wall in Dublin Bay
Dublin Bay
Dublin Bay is a C-shaped inlet of the Irish Sea on the east coast of Ireland. The bay is about 10 kilometres wide along its north-south base, and 7 km in length to its apex at the centre of the city of Dublin; stretching from Howth Head in the north to Dalkey Point in the south...
. Neighbouring suburbs are Ringsend
Ringsend
Ringsend is a southside inner suburb of Dublin, the capital of Ireland. It is located on the south bank of the River Liffey, about two kilometres east of the city centre, and is the southern terminus of the East Link Toll Bridge....
, Donnybrook
Donnybrook, Dublin
Donnybrook is a district of Dublin, Ireland. It is situated on the southside of the city, in the Dublin 4 postal district, and is home to the Irish state broadcaster RTÉ. It was once part of the Pembroke Township...
and Irishtown
Irishtown
Irishtown may refer to:* Irishtown, Dublin, Ireland* Irishtown Stadium* Irishtown, County Antrim, a townland in County Antrim, Northern Ireland* Irishtown, County Mayo, a village in County Mayo, Ireland* Irishtown, Newfoundland and Labrador, Canada...
.

The area is served by the (DART
Dublin Area Rapid Transit
The Dublin Area Rapid Transit is part of the suburban railway network in Ireland, running mainly along the coastline of Dublin Bay on the Trans-Dublin route, from Greystones in County Wicklow, through Dublin to Howth and Malahide in County Dublin.Trains are powered via a 1500V DC overhead catenary...
) commuter rail system and two stops are located in the area, Sandymount
Sandymount railway station
Sandymount railway station serves Sandymount and Ballsbridge in Dublin, Ireland. The station is staffed seven days a week and has two platforms, both fully accessible via ramps....
and Sydney Parade
Sydney Parade railway station
Sydney Parade Railway Station is located at Sydney Parade Avenue in Sandymount, Dublin 4, Ireland.The station opened in January 1835 as a halt on the Dublin and Kingstown Railway. In 1852, it was upgraded to a full station with the construction of shelters, stone platforms, and a footbridge.The...
. It is served by Dublin Bus routes 2, 3 and 18, however in the near future there are plans to amalgamate the 2 and 3 to have a more frequent Route 2 which will run from UCD to Parnell Square. It was once served by route 52 which ceased operation in 1998. Both the Greystones and Dalkey Aircoach
Aircoach
Aircoach is a Republic of Ireland based subsidiary company of the United Kingdom based FirstGroup. It provides airport bus express coach services from Cork, Greystones, Bray, South Dublin and Dublin City Centre to Dublin Airport. It also operates contracted bus service for airport car parks...
services to Dublin Airport have two stops in Sandymount.

Sandymount railway station on the electrified (DART
Dublin Area Rapid Transit
The Dublin Area Rapid Transit is part of the suburban railway network in Ireland, running mainly along the coastline of Dublin Bay on the Trans-Dublin route, from Greystones in County Wicklow, through Dublin to Howth and Malahide in County Dublin.Trains are powered via a 1500V DC overhead catenary...
) suburban railway
Rail transport
Rail transport is a means of conveyance of passengers and goods by way of wheeled vehicles running on rail tracks. In contrast to road transport, where vehicles merely run on a prepared surface, rail vehicles are also directionally guided by the tracks they run on...
system was originally opened in January 1835 and continues to this day.

Sandymount Green is a triangular park located right next to the village. The houses along the south side of the green are part of what once was Sandymount Castle and the roads behind this bear the name. There are some shops, restaurants and cafés around the green.

Sandymount Strand is situated next to the village and suburb of Sandymount in Dublin. The large strand, which is part of the South Bull, (a mirror to the North Bull sandbank, which grew into North Bull Island) is a major component of the south side of Dublin Bay
Dublin Bay
Dublin Bay is a C-shaped inlet of the Irish Sea on the east coast of Ireland. The bay is about 10 kilometres wide along its north-south base, and 7 km in length to its apex at the centre of the city of Dublin; stretching from Howth Head in the north to Dalkey Point in the south...
. The strand runs from this point to Merrion Gates.

Sandymount Strand is a popular place for locals to take a walk. It is not ideal for swimming as the gradual slope of the beach makes the water too shallow to allow swimming near the shoreline. People and cars have been occasionally trapped by the incoming tide
Tide
Tides are the rise and fall of sea levels caused by the combined effects of the gravitational forces exerted by the moon and the sun and the rotation of the Earth....
.

The Merrion Promenade Pier and Baths Co. built Sandymount swimming baths in 1883. The baths measured approximately 40 by 40 metres, with a 75-metre pier added in 1884. The pier featured a bandstand half way along it and summer concerts were regularly held there for many years. By 1920, the pier had deteriorated so much that it had to be demolished. The concrete baths section, which resembles a small harbour, remains; the baths still remain in Sandymount but they have been vandalised with graffiti and are mainly visited by tourists.

About half way along the strand is a Martello tower
Martello tower
Martello towers are small defensive forts built in several countries of the British Empire during the 19th century, from the time of the Napoleonic Wars onwards....
, part of a system of defences built to warn of an invasion by Napoleon. The Tower was a popular cafe back in the 1960s. An attempt to turn the tower into a restaurant led to the installation of a large window with roller blinds on the seaward side of the tower. The restaurant never opened, leaving the tower with the modified window, and landscaped exterior abandoned on the strand. A paying automated public toilet is adjacent.

Scoil Mhuire
Scoil Mhuire
The Sisters of Mercy, Scoil Mhuire, came to Longford from Mother House in Baggot Street, Dublin in April 1861. They first lived in Keon’s Terrace and taught young children in the ground floor room of the old St. Micheal’s Boys’ School. Older girls who wanted to continue their education did so in...
is a public Girls' Primary School on Gilford Road and Star of the Sea Boys' School is on Leahy's Terrace. Marian College
Marian College (Dublin)
Marian College is a Marist Catholic secondary school on Lansdowne Road in Ballsbridge, Dublin. The school motto is Optimum Optare - the pursuit of excellence. The school was founded in 1954 and has a student population of 413 boys and 12 girls...
is located nearby in Ballsbridge
Ballsbridge
Ballsbridge is a suburb of Dublin, Ireland, named for the bridge spanning the River Dodder on the south side of the city. The sign on the bridge still proclaims it as "Ball's Bridge" in recognition of the fact that the original bridge in this location was built and owned by a Mr...
, and the former Sandymount High School
Sandymount High School
Sandymount High School was a coeducational secondary school on Herbert Road, Sandymount, Dublin 4. Founded in 1947, it was initially controversial because, as a non-denominational school, it wasn't owned by a church but by the Cannon family, who also provided the two headmasters the school had:...
and Roslyn Park are within walking distance of the village.

There are many sports clubs in the vicinity of Sandymount. Rugby, tennis, cricket, soccer and hockey are popular in Railway Union Club. A well known fitness company (Westwood) also has a gymnasium and sports ground in Sandymount.

The Church of Ireland
Church of Ireland
The Church of Ireland is an autonomous province of the Anglican Communion. The church operates in all parts of Ireland and is the second largest religious body on the island after the Roman Catholic Church...
Church of St John of the Evangelist is located at the top of St John's Road. The Catholic church in Sandymount is dedicated to Our Lady Star of the Sea and is near the north end of Sandymount Road. Christ Church, on Sandymount Green, is a united Methodist and Presbyterian church, which appoints a minister from either denomination alternately and Mount Tabor nursing home shares the grounds of the church.

The area is also home to a house of the Franciscan Missionary Sisters for Africa.

The following live or have lived in Sandymount:

Sandymount Strand is the most famous beach in Irish fiction, James Joyce
James Joyce
James Augustine Aloysius Joyce was an Irish novelist and poet, considered to be one of the most influential writers in the modernist avant-garde of the early 20th century...
based two episodes of his epic novel Ulysses
Ulysses (novel)
Ulysses is a novel by the Irish author James Joyce. It was first serialised in parts in the American journal The Little Review from March 1918 to December 1920, and then published in its entirety by Sylvia Beach on 2 February 1922, in Paris. One of the most important works of Modernist literature,...
here:

On the morning of Bloomsday
Bloomsday
Bloomsday is a commemoration observed annually on 16 June in Dublin and elsewhere to celebrate the life of Irish writer James Joyce and relive the events in his novel Ulysses, all of which took place on the same day in Dublin in 1904...
, in the Proteus episode, Stephen Dedalus
Stephen Dedalus
Stephen Dedalus is James Joyce's literary alter ego, appearing as the protagonist and antihero of his first, semi-autobiographical novel of artistic existence A Portrait of the Artist as a Young Man and an important character in Joyce's Ulysses...
wanders "into eternity" on the strand; later the same day, Leopold Bloom
Leopold Bloom
Leopold Bloom is the fictional protagonist and hero of James Joyce's Ulysses. His peregrinations and encounters in Dublin on 16 June 1904 mirror, on a more mundane and intimate scale, those of Ulysses/Odysseus in The Odyssey....
sits on a rock and watches while young Gertie lifts her skirt as Bloom pleasures himself. It was this incident in the Nausicaa episode which led to the ban
Ban (law)
A ban is, generally, any decree that prohibits something.Bans are formed for the prohibition of activities within a certain political territory. Some see this as a negative act and others see it as maintaining the "status quo"...
ning of the book in the USA
United States
The United States of America is a federal constitutional republic comprising fifty states and a federal district...
for alleged obscenity
Obscenity
An obscenity is any statement or act which strongly offends the prevalent morality of the time, is a profanity, or is otherwise taboo, indecent, abhorrent, or disgusting, or is especially inauspicious...
.