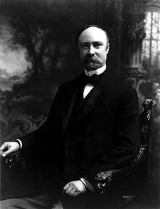 Born in a log cabin
Log cabin
A log cabin is a house built from logs. It is a fairly simple type of log house. A distinction should be drawn between the traditional meanings of "log cabin" and "log house." Historically most "Log cabins" were a simple one- or 1½-story structures, somewhat impermanent, and less finished or less...
near Delaware, Ohio
Delaware, Ohio
The City of Delaware is a city in and the county seat of Delaware County in the United States state of Ohio. Delaware was founded in 1808 and was incorporated in 1816. It is located near the center of Ohio, is about north of Columbus, and is part of the Columbus, Ohio Metropolitan Area...
, Fairbanks's ancestry traced back to Puritan followers of Oliver Cromwell
Oliver Cromwell
Oliver Cromwell was an English military and political leader who overthrew the English monarchy and temporarily turned England into a republican Commonwealth, and served as Lord Protector of England, Scotland, and Ireland....
, with Jonathan Fayerbankes
Jonathan Fairbanks
Jonathan Fairbanks was an American colonist born in Heptonstall, Halifax, Yorkshire, England who immigrated to New England in 1633...
the first family member to reach America in 1632. The son of a wagon-maker, Fairbanks in his youth saw his family's home used as a hiding place for runaway slaves. After attending country schools and working on a farm, Fairbanks attended Ohio Wesleyan University
Ohio Wesleyan University
Ohio Wesleyan University is a private liberal arts college in Delaware, Ohio, United States. It was founded in 1842 by Methodist leaders and Central Ohio residents as a nonsectarian institution, and is a member of the Ohio Five — a consortium of Ohio liberal arts colleges...
, where he graduated in 1872. While there, Fairbanks was co-editor of the school newspaper with Cornelia Cole, whom he married after both graduated from the school.

Fairbanks' first position was as an agent of the Associated Press
Associated Press
The Associated Press is an American news agency. The AP is a cooperative owned by its contributing newspapers, radio and television stations in the United States, which both contribute stories to the AP and use material written by its staff journalists...
in Pittsburgh, Pennsylvania
Pittsburgh, Pennsylvania
Pittsburgh is the second-largest city in the US Commonwealth of Pennsylvania and the county seat of Allegheny County. Regionally, it anchors the largest urban area of Appalachia and the Ohio River Valley, and nationally, it is the 22nd-largest urban area in the United States...
, reporting on political rallies for Horace Greeley
Horace Greeley
Horace Greeley was an American newspaper editor, a founder of the Liberal Republican Party, a reformer, a politician, and an outspoken opponent of slavery...
during the 1872 presidential election
United States presidential election, 1872
In the United States presidential election of 1872, incumbent President Ulysses S. Grant was easily elected to a second term in office with Senator Henry Wilson of Massachusetts as his running mate, despite a split within the Republican Party that resulted in a defection of many Liberal Republicans...
. Fairbanks then moved to Cleveland, Ohio
Cleveland, Ohio
Cleveland is a city in the U.S. state of Ohio and is the county seat of Cuyahoga County, the most populous county in the state. The city is located in northeastern Ohio on the southern shore of Lake Erie, approximately west of the Pennsylvania border...
, where he briefly attended law school before his admittance to the Ohio
Ohio
Ohio is a Midwestern state in the United States. The 34th largest state by area in the U.S.,it is the 7th‑most populous with over 11.5 million residents, containing several major American cities and seven metropolitan areas with populations of 500,000 or more.The state's capital is Columbus...
bar in 1874. He then moved to Indianapolis, Indiana
Indianapolis, Indiana
Indianapolis is the capital of the U.S. state of Indiana, and the county seat of Marion County, Indiana. As of the 2010 United States Census, the city's population is 839,489. It is by far Indiana's largest city and, as of the 2010 U.S...
, the same year. Although not generally known his uncle was Ohio Governor and United States President Rutherford B. Hayes
Rutherford B. Hayes
Rutherford Birchard Hayes was the 19th President of the United States . As president, he oversaw the end of Reconstruction and the United States' entry into the Second Industrial Revolution...
who treated his nephew as a political advisor.

During his early years in Indiana, Fairbanks was paid $5,000 a year as manager for the bankrupt Indianapolis, Bloomington and Western Railroad. With the assistance of his uncle, Charles W. Smith, whose connections had helped him obtain the position, Fairbanks was able to become a railroad financier, and served as counsel for millionaire Jay Gould
Jay Gould
Jason "Jay" Gould was a leading American railroad developer and speculator. He has long been vilified as an archetypal robber baron, whose successes made him the ninth richest American in history. Condé Nast Portfolio ranked Gould as the 8th worst American CEO of all time...
.

During his eight years in the U.S. Senate, Fairbanks served as a key adviser to McKinley during the Spanish-American War
Spanish-American War
The Spanish–American War was a conflict in 1898 between Spain and the United States, effectively the result of American intervention in the ongoing Cuban War of Independence...
and was also the Chairman of the Committee on Immigration and the Committee on Public Buildings and Grounds. In 1898, Fairbanks was appointed a member of the United States
United States
The United States of America is a federal constitutional republic comprising fifty states and a federal district...
and British
United Kingdom
The United Kingdom of Great Britain and Northern IrelandIn the United Kingdom and Dependencies, other languages have been officially recognised as legitimate autochthonous languages under the European Charter for Regional or Minority Languages...
Joint High Commission which met in Quebec City
Quebec City
Quebec , also Québec, Quebec City or Québec City is the capital of the Canadian province of Quebec and is located within the Capitale-Nationale region. It is the second most populous city in Quebec after Montreal, which is about to the southwest...
for the adjustment of Canadian
Canada
Canada is a North American country consisting of ten provinces and three territories. Located in the northern part of the continent, it extends from the Atlantic Ocean in the east to the Pacific Ocean in the west, and northward into the Arctic Ocean...
questions, including the boundary dispute about Alaska
Alaska
Alaska is the largest state in the United States by area. It is situated in the northwest extremity of the North American continent, with Canada to the east, the Arctic Ocean to the north, and the Pacific Ocean to the west and south, with Russia further west across the Bering Strait...
. 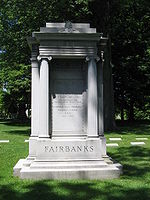 Fairbanks once again resumed the practice of law in Indianapolis, but his health started to fail. He died on June 4, 1918 in his home of nephritis
Nephritis
Nephritis is inflammation of the nephrons in the kidneys. The word "nephritis" was imported from Latin, which took it from Greek: νεφρίτιδα. The word comes from the Greek νεφρός - nephro- meaning "of the kidney" and -itis meaning "inflammation"....
. He was interred in Crown Hill Cemetery
Crown Hill Cemetery
Crown Hill Cemetery, located at 700 West 38th Street in Indianapolis, is the third largest non-governmental cemetery in the United States at . It contains of paved road, over 150 species of trees and plants, over 185,000 graves, and services roughly 1,500 burials per year. It sits on the highest...
.

The city of Fairbanks, Alaska, the Fairbanks North Star Borough
Fairbanks North Star Borough, Alaska
-Demographics:As of the 2000 census, 82,840 people, 29,777 households, and 20,516 families were residing in the borough. The population density was 11 people per square mile . There were 33,291 housing units at an average density of 4 per square mile...
it lies within, and the Fairbanks School District in Union County, Ohio
Union County, Ohio
Union County is a county located in the US state of Ohio. As of the 2010 census, the population was 52,300. Increasingly becoming more of a suburban county, the population was estimated at 47,234 in 2007 by the U.S. Census Bureau...
, Fairbanks, Minnesota
Fairbanks, Minnesota
Fairbanks is an unincorporated community in Fairbanks Township, Saint Louis County, Minnesota, United States.The community is located southeast of the city of Hoyt Lakes on County Highway 16.Fairbanks is located within the Superior National Forest...
, Fairbanks, Oregon
Fairbanks, Oregon
Fairbanks is an unincorporated community in Wasco County, Oregon, United States. It is about east of The Dalles, just south of U.S. Route 30/Interstate 84, near Fifteenmile Creek....
, and Fairbanks Township, Michigan
Fairbanks Township, Michigan
Fairbanks Township is a civil township of Delta County in the U.S. state of Michigan. As of the 2000 census, the township population was 321.-Communities:...
are named after him.
On Friday, May 15, 2009, an Ohio historical marker
Historical marker
A historical marker or historic marker is an indicator such as a plaque or sign to commemorate an event or person of historic interest and to associate that point of interest with a specific locale one can visit.-Description:...
was dedicated in Unionville Center, commemorating Fairbanks' birthplace.