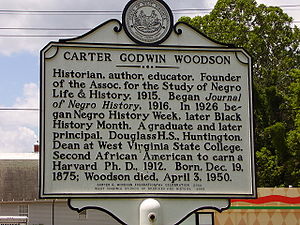 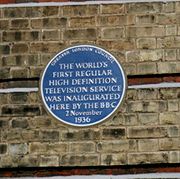 A historical marker or historic marker is an indicator such as a plaque
Commemorative plaque
A commemorative plaque, or simply plaque, is a plate of metal, ceramic, stone, wood, or other material, typically attached to a wall, stone, or other vertical surface, and bearing text in memory of an important figure or event...
or sign to commemorate
Memorial
A memorial is an object which serves as a focus for memory of something, usually a person or an event. Popular forms of memorials include landmark objects or art objects such as sculptures, statues or fountains, and even entire parks....
an event or person of historic interest and to associate that point of interest with a specific locale one can visit.

Other historical markers are created by local municipalities
Municipality
A municipality is essentially an urban administrative division having corporate status and usually powers of self-government. It can also be used to mean the governing body of a municipality. A municipality is a general-purpose administrative subdivision, as opposed to a special-purpose district...
, non-profit organizations, companies
Company
A company is a form of business organization. It is an association or collection of individual real persons and/or other companies, who each provide some form of capital. This group has a common purpose or focus and an aim of gaining profits. This collection, group or association of persons can be...
, or individuals. In addition to geographically defined regions, individual organizations, such as E Clampus Vitus
E Clampus Vitus
The Ancient and Honorable Order of E Clampus Vitus is a fraternal organization dedicated to the study and preservation of Western heritage, especially the history of the Mother Lode and gold mining regions of the area...
or the American Society of Mechanical Engineers
American Society of Mechanical Engineers
The American Society of Mechanical Engineers is a professional body, specifically an engineering society, focused on mechanical engineering....
, can choose to maintain a national set of historical markers that fit a certain theme.

The criteria and circumstances through which a party administers the distribution of historical markers varies. For example, the "Preservation Worcester" program in Worcester, Massachusetts
Worcester, Massachusetts
Worcester is a city and the county seat of Worcester County, Massachusetts, United States. Named after Worcester, England, as of the 2010 Census the city's population is 181,045, making it the second largest city in New England after Boston....
allows a person to register their house or other structure of least fifty years of age if the building is well-preserved with retention of its original character and importance to the architectural, cultural or historical nature of the local neighborhood. One then pays a fee ($185 to $225) to receive the historical marker itself.

In the same state, the Boston
Boston
Boston is the capital of and largest city in Massachusetts, and is one of the oldest cities in the United States. The largest city in New England, Boston is regarded as the unofficial "Capital of New England" for its economic and cultural impact on the entire New England region. The city proper had...
neighborhood of Charlestown, Massachusetts
Charlestown, Massachusetts
Charlestown is a neighborhood of Boston, Massachusetts, United States, and is located on a peninsula north of downtown Boston. Charlestown was originally a separate town and the first capital of the Massachusetts Bay Colony; it became a city in 1847 and was annexed by Boston on January 5, 1874...
has its own local association to administer historical markers. Other historical markers in and around Boston are administered by agencies such as The Bostonian Society
The Bostonian Society
The Bostonian Society is a non-profit organization that was founded in 1881 for the purpose of preventing the Old State House from being "moved brick by brick" from Boston, Massachusetts to Chicago, Illinois...
or are associated with sites such as those along the Freedom Trail
Freedom Trail
The Freedom Trail is a red path through downtown Boston, Massachusetts, that leads to 16 significant historic sites. It is a 2.5-mile walk from Boston Common to Bunker Hill Monument in Charlestown. Simple ground markers explaining events, graveyards, notable churches and other buildings, and a...
, the Black Heritage Trail
Black Heritage Trail
The Black Heritage is a path in Boston, Massachusetts, winding through the Beacon Hill neighborhood and sites important in American black history....
, and the Emerald Necklace
Emerald Necklace
The Emerald Necklace consists of an chain of parks linked by parkways and waterways in Boston and Brookline, Massachusetts. It gets its name from the way the planned chain appears to hang from the "neck" of the Boston peninsula, although it was never fully constructed.-Overview:The Necklace...
.

Blue plaque
Blue plaque
A blue plaque is a permanent sign installed in a public place to commemorate a link between that location and a famous person or event, serving as a historical marker....
s are the principal type of historical markers found throughout England
England
England is a country that is part of the United Kingdom. It shares land borders with Scotland to the north and Wales to the west; the Irish Sea is to the north west, the Celtic Sea to the south west, with the North Sea to the east and the English Channel to the south separating it from continental...
and are the closest thing there is to a historical marker system in that country. An example is the blue plaque scheme run by English Heritage
English Heritage
English Heritage . is an executive non-departmental public body of the British Government sponsored by the Department for Culture, Media and Sport...
in London
London
London is the capital city of :England and the :United Kingdom, the largest metropolitan area in the United Kingdom, and the largest urban zone in the European Union by most measures. Located on the River Thames, London has been a major settlement for two millennia, its history going back to its...
. Founded by the Royal Society of Arts
Royal Society of Arts
The Royal Society for the encouragement of Arts, Manufacturers and Commerce is a British multi-disciplinary institution, based in London. The name Royal Society of Arts is frequently used for brevity...
in 1867 and later taken over by London County Council
London County Council
London County Council was the principal local government body for the County of London, throughout its 1889–1965 existence, and the first London-wide general municipal authority to be directly elected. It covered the area today known as Inner London and was replaced by the Greater London Council...
, these were originally erected in a variety of shapes and colors. The National Trust
National Trust for Places of Historic Interest or Natural Beauty
The National Trust for Places of Historic Interest or Natural Beauty, usually known as the National Trust, is a conservation organisation in England, Wales and Northern Ireland...
(which is a non-profit charity organization
Non-profit organization
Nonprofit organization is neither a legal nor technical definition but generally refers to an organization that uses surplus revenues to achieve its goals, rather than distributing them as profit or dividends...
unlike English Heritage and English Heritage properties) has its own similar markers as well.

However, not all historical markers in the United Kingdom are blue, and many are not ceramic. There are commemorative plaque schemes in Bath, Edinburgh
Edinburgh
Edinburgh is the capital city of Scotland, the second largest city in Scotland, and the eighth most populous in the United Kingdom. The City of Edinburgh Council governs one of Scotland's 32 local government council areas. The council area includes urban Edinburgh and a rural area...
, Brighton
Brighton
Brighton is the major part of the city of Brighton and Hove in East Sussex, England on the south coast of Great Britain...
, Liverpool
Liverpool
Liverpool is a city and metropolitan borough of Merseyside, England, along the eastern side of the Mersey Estuary. It was founded as a borough in 1207 and was granted city status in 1880...
, Loughton
Loughton
Loughton is a town and civil parish in the Epping Forest district of Essex. It is located between 11 and 13 miles north east of Charing Cross in London, south of the M25 and west of the M11 motorway and has boundaries with Chingford, Waltham Abbey, Theydon Bois, Chigwell and Buckhurst Hill...
, and elsewhere—some of which differ from the familiar blue plaque. A scheme in Manchester
Manchester
Manchester is a city and metropolitan borough in Greater Manchester, England. According to the Office for National Statistics, the 2010 mid-year population estimate for Manchester was 498,800. Manchester lies within one of the UK's largest metropolitan areas, the metropolitan county of Greater...
uses color-coded plaques to commemorate figures, with each of the colors corresponding to the person's occupation. The Dead Comics' Society installs blue plaques to commemorate the former residences of well-known comedians, including those of Sid James
Sid James
Sid James was an English-based South African actor and comedian. He made his name as Tony Hancock's co-star in Hancock's Half Hour and also starred in the popular Carry On films. He was known for his trademark "dirty laugh" and lascivious persona...
and John Le Mesurier
John Le Mesurier
John Le Mesurier was a BAFTA Award-winning English actor. He is most famous for his role as Sergeant Arthur Wilson in the popular 1970s BBC comedy Dad's Army.-Career:...
. In 2003, the London Borough
London borough
The administrative area of Greater London contains thirty-two London boroughs. Inner London comprises twelve of these boroughs plus the City of London. Outer London comprises the twenty remaining boroughs of Greater London.-Functions:...
of Southwark
Southwark
Southwark is a district of south London, England, and the administrative headquarters of the London Borough of Southwark. Situated east of Charing Cross, it forms one of the oldest parts of London and fronts the River Thames to the north...
started a plaque scheme which included living people in the awards. Even in London, the Westminster City Council
Westminster City Council
Westminster City Council is the local authority for the City of Westminster in Greater London, England. It is a London borough council and is entitled to be known as a city council, which is a rare distinction in the United Kingdom. The city is divided into 20 wards, each electing three councillors...
runs a green plaque scheme which is run alongside that of the blue plaque scheme administered by English Heritage. Other schemes are run by civic societies, district or town councils, or local history
Local history
Local history is the study of history in a geographically local context and it often concentrates on the local community. It incorporates cultural and social aspects of history...
groups, and often operate with different criteria. In 2010, British tabloid The Sun placed a red coloured plaque outside the Snappy Snaps
Snappy Snaps
Snappy Snaps is a British photographic services franchise established in 1983 by Don Kennedy and Tim MacAndrews. there are 125 Snappy Snaps franchise locations throughout the UK...
store in Hampstead, North London where singer George Michael
George Michael
George Michael is a British musician, singer, songwriter and record producer who rose to fame in the 1980s when he formed the pop duo Wham! with his school friend, Andrew Ridgeley...
crashed in the early hours of Sunday 4 July 2010. The newspaper stated it planned to put similar plaques in sites around the UK to mark events that had proved popular in the UK Tabloid Press.