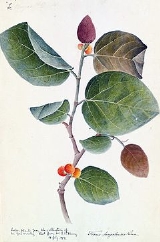 Encyclopedia
A banyan is a fig
Ficus
Ficus is a genus of about 850 species of woody trees, shrubs, vines, epiphytes, and hemiepiphyte in the family Moraceae. Collectively known as fig trees or figs, they are native throughout the tropics with a few species extending into the semi-warm temperate zone. The Common Fig Ficus is a genus of...
that starts its life as an epiphyte
Epiphyte
An epiphyte is a plant that grows upon another plant non-parasitically or sometimes upon some other object , derives its moisture and nutrients from the air and rain and sometimes from debris accumulating around it, and is found in the temperate zone and in the...
when its seeds
SEEDS
SEEDS is a voluntary organisation registered under the Societies Act of India....
germinate in the cracks and crevices on a host tree
Tree
A tree is a perennial woody plant. It is most often defined as a woody plant that has many secondary branches supported clear of the ground on a single main stem or trunk with clear apical dominance. A minimum height specification at maturity is cited by some authors, varying from 3 m to...
(or on structures like buildings and bridges). "Banyan" often refers specifically to the Indian Banyan or Ficus benghalensis
Ficus benghalensis
Ficus benghalensis, the banyan, is a large and extensive growing tree of the Indian subcontinent. Ficus benghalensis produces propagating roots which grow downwards as aerial roots. Once these roots reach the ground, they grow into woody trunks that can become indistinguishable from the main...
, the National tree of India
India
India , officially the Republic of India , is a country in South Asia. It is the seventh-largest country by geographical area, the second-most populous country with over 1.2 billion people, and the most populous democracy in the world...
, though the term has been generalized to include all figs that share a unique life cycle, and systematically
Systematics
Biological systematics is the study of the diversification of terrestrial life, both past and present, and the relationships among living things through time. Relationships are visualized as evolutionary trees...
to refer to the subgenus
Subgenus
In biology, a subgenus is a taxonomic rank directly below genus.In zoology, a subgeneric name can be used independently or included in a species name, in parentheses, placed between the generic name and the specific epithet: e.g. the Tiger Cowry of the Indo-Pacific, Cypraea tigris Linnaeus, which...
Urostigma. The seeds of banyans are dispersed by fruit-eating
Frugivore
A frugivore is a fruit eater. It can be any type of herbivore or omnivore where fruit is a preferred food type. Because approximately 20% of all mammalian herbivores also eat fruit, frugivory is considered to be common among mammals. Since frugivores eat a lot of fruit they are highly dependent...
birds. The seeds germinate and send down roots towards the ground, and may envelop part of the host tree or building structure with their roots, giving them the casual name of "strangler fig."
Strangler Fig
Strangler fig is the common name for a number of tropical and subtropical plant species, including some banyans and unrelated vines, including among many other species:* Ficus aurea, also known as the Florida Strangler Fig...
The "strangling" growth habit is found in a number of tropical forest species, particularly of the genus Ficus, that compete for light. Any Ficus species showing this habit may be termed a strangler fig.

The leaves of Banyan tree are large, leathery, glossy green and elliptical in shape. Like most of the fig-trees, leaf bud is covered by two large scales. As the leaf develops the scales fall. Young leaves have an attractive reddish tinge.

Older banyan trees are characterized by their Aerial prop root
Aerial root
Aerial roots are roots above the ground. They are almost always adventitious. They are found in diverse plant species, including epiphytes such as orchids, tropical coastal swamp trees such as mangroves, the resourceful banyan trees, the warm-temperate rainforest rātā and pōhutukawa Aerial roots...
s that grow into thick woody trunks which, with age, can become indistinguishable from the main trunk. Old trees can spread out laterally using these prop roots to cover a wide area.
Like other Fig species (which includes the common edible fig Ficus carica), banyans have unique fruit structures and are dependent on fig wasp
Fig wasp
Fig wasps are wasps of the family Agaonidae which pollinate figs or are otherwise associated with figs, a coevolutional relationship that has been developing for at least 80 million years...
s for reproduction.

The name was originally given to F. benghalensis
Ficus benghalensis
Ficus benghalensis, the banyan, is a large and extensive growing tree of the Indian subcontinent. Ficus benghalensis produces propagating roots which grow downwards as aerial roots. Once these roots reach the ground, they grow into woody trunks that can become indistinguishable from the main...
and comes from India
India
India , officially the Republic of India , is a country in South Asia. It is the seventh-largest country by geographical area, the second-most populous country with over 1.2 billion people, and the most populous democracy in the world...
where early travellers observed that the shade of the tree was frequented by banias or Indian traders.

In the Gujarati
Gujarati language
Gujarati is an Indo-Aryan language, and part of the greater Indo-European language family. It is derived from a language called Old Gujarati which is the ancestor language of the modern Gujarati and Rajasthani languages...
language, banya means "grocer/merchant," not "tree." The Portuguese picked up the word to refer specifically to Hindu merchants and passed it along to the English as early as 1599 with the same meaning. By 1634, English writers began to tell of the banyan tree, a tree under which Hindu merchants would conduct their business. The tree provided a shaded place for a village meeting or for merchants to sell their goods. Eventually "banyan" became the name of the tree itself.

Proper noun Banyan refers specifically to the species F. benghalensis
Ficus benghalensis
Ficus benghalensis, the banyan, is a large and extensive growing tree of the Indian subcontinent. Ficus benghalensis produces propagating roots which grow downwards as aerial roots. Once these roots reach the ground, they grow into woody trunks that can become indistinguishable from the main...
, which can grow into a giant tree covering several hectare
Hectare
The hectare is a metric unit of area defined as 10,000 square metres , and primarily used in the measurement of land. In 1795, when the metric system was introduced, the are was defined as being 100 square metres and the hectare was thus 100 ares or 1/100 km2...
s. Over time, the name became generalized to all strangler fig
Strangler Fig
Strangler fig is the common name for a number of tropical and subtropical plant species, including some banyans and unrelated vines, including among many other species:* Ficus aurea, also known as the Florida Strangler Fig...
s. There are many banyan species, including: 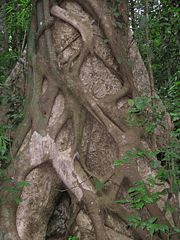 Due to the complex structure of the roots and extensive branching, the banyan is extensively used for creating Bonsai
Bonsai
is a Japanese art form using miniature trees grown in containers. Similar practices exist in other cultures, including the Chinese tradition of penjing from which the art originated, and the miniature living landscapes of Vietnamese hòn non bộ...
. Taiwan's oldest living bonsai is a 240-year-old banyan housed in Tainan.

In Bhagawat Gita Lord Krishna said "There is a banyan tree which has its roots upward and its branches down, and the Vedic hymns are its leaves. One who knows this tree is the knower of the Vedas." (Bg 15.1) Here the material world is described as a tree whose roots are upwards and branches are below. We have experience of a tree whose roots are upward: if one stands on the bank of a river or any reservoir of water, he can see that the trees reflected in the water are upside down. The branches go downward and the roots upward. Similarly, this material world is a reflection of the spiritual world. The material world is but a shadow of reality. In the shadow there is no reality or substantiality, but from the shadow we can understand that there is substance and reality.

Elsewhere in the Bhagavad Gita
Bhagavad Gita
The ' , also more simply known as Gita, is a 700-verse Hindu scripture that is part of the ancient Sanskrit epic, the Mahabharata, but is frequently treated as a freestanding text, and in particular, as an Upanishad in its own right, one of the several books that constitute general Vedic tradition...
, Krishna
Krishna
Krishna is a central figure of Hinduism and is traditionally attributed the authorship of the Bhagavad Gita. He is the supreme Being and considered in some monotheistic traditions as an Avatar of Vishnu...
says:


Of all trees I am the banyan tree, and of the sages among the demigods I am Narada
Narada
Narada or Narada Muni is a divine sage from the Vaisnava tradition, who plays a prominent role in a number of the Puranic texts, especially in the Bhagavata Purana, and in the Ramayana...
. Of the Gandharva
Gandharva
Gandharva is a name used for distinct mythological beings in Hinduism and Buddhism; it is also a term for skilled singers in Indian classical music.-In Hinduism:...
s I am Citraratha, and among perfected beings I am the sage Kapila.(10.26) 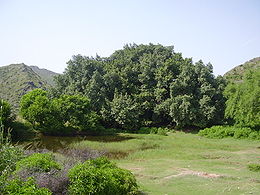