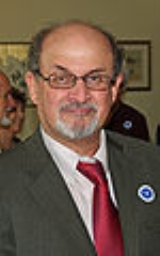 Overview
Sir Ahmed Salman Rushdie is an Indian-British novelist and essayist. His second novel, Midnight's Children
Midnight's Children
Midnight's Children is a 1981 book by Salman Rushdie about India's transition from British colonialism to independence and the partition of India. It is considered an example of postcolonial literature and magical realism...
(1981), won the Booker Prize in 1981. Much of his fiction is set on the Indian subcontinent
Indian subcontinent
The Indian subcontinent, also Indian Subcontinent, Indo-Pak Subcontinent or South Asian Subcontinent is a region of the Asian continent on the Indian tectonic plate from the Hindu Kush or Hindu Koh, Himalayas and including the Kuen Lun and Karakoram ranges, forming a land mass which extends...
. His style is often classified as magical realism mixed with historical fiction, and a dominant theme of his work is the story of the many connections, disruptions and migrations between the Eastern and Western worlds.

His fourth novel, The Satanic Verses
The Satanic Verses
The Satanic Verses is Salman Rushdie's fourth novel, first published in 1988 and inspired in part by the life of Prophet Muhammad. As with his previous books, Rushdie used magical realism and relied on contemporary events and people to create his characters...
(1988), was the centre of a major controversy
The Satanic Verses controversy
The Satanic Verses controversy was the heated and sometimes violent Muslim reaction to the publication of Salman Rushdie's novel The Satanic Verses. Many Muslims accused Rushdie of blasphemy or unbelief and in 1989 Ayatollah Ruhollah Khomeini of Iran issued a fatwa ordering Muslims to kill Rushdie...
, drawing protests from Muslim
Muslim
A Muslim, also spelled Moslem, is an adherent of Islam, a monotheistic, Abrahamic religion based on the Quran, which Muslims consider the verbatim word of God as revealed to prophet Muhammad. "Muslim" is the Arabic term for "submitter" .Muslims believe that God is one and incomparable...
s in several countries.

Children are the vessels into which adults pour their poison.

But names, once they are in common use, quickly become mere sounds, their etymology being buried, like so many of the earth's marvels, beneath the dust of habit.

The world, somebody wrote, is the place we prove real by dying in it.

The idea of the sacred is quite simply one of the most conservative notions in any culture, because it seeks to turn other ideas — uncertainty, progress, change — into crimes.

Literature is where I go to explore the highest and lowest places in human society and in the human spirit, where I hope to find not absolute truth but the truth of the tale, of the imagination of the heart.

The only people who see the whole picture are the ones who step outside the frame.

I've been worrying about God a little bit lately. It seems as if he's been lashing out, you know, destroying cities, annihilating places. It seems like he's been in a bad mood. And I think it has to do with the quality of lovers he's been getting. If you look at the people who love God now, you know, if I was God, I'd need to destroy something.