Encyclopedia
Military transport aircraft are typically fixed and rotary wing cargo aircraft which are used to deliver troops, weapons and other military equipment by a variety of methods to any area of military operations around the surface of the planet, usually outside of the commercial flight routes in uncontrolled airspace
Uncontrolled airspace
Uncontrolled airspace is airspace where an Air Traffic Control service is not deemed necessary or cannot be provided for practical reasons. According to the airspace classes set by ICAO both class F and class G airspace are uncontrolled...
. Originally derived from bombers, military transport aircraft were used for delivering airborne forces
Airborne forces
Airborne forces are military units, usually light infantry, set up to be moved by aircraft and 'dropped' into battle. Thus they can be placed behind enemy lines, and have an ability to deploy almost anywhere with little warning...
during the Second World War and towing military glider
Military glider
Military gliders have been used by the military of various countries for carrying troops and heavy equipment to a combat zone, mainly during the Second World War. These engineless aircraft were towed into the air and most of the way to their target by military transport planes, e.g...
s. Some military transport aircraft are tasked to performs multi-role duties such as aerial refueling
Aerial refueling
Aerial refueling, also called air refueling, in-flight refueling , air-to-air refueling or tanking, is the process of transferring fuel from one aircraft to another during flight....
and, tactical, operational and strategic airlift
Airlift
Airlift is the act of transporting people or cargo from point to point using aircraft.Airlift may also refer to:*Airlift , a suction device for moving sand and silt underwater-See also:...
s onto unprepared runways, or those constructed by engineers.

Fixed wing transport aircraft are largely defined in terms of their range capability as strategic airlift, airlift and tactical airlift to reflect the needs of the land forces which they most often support. These roughly correspond to the commercial flight length
Flight length
In aviation, the flight length is defined as the time airborne during a flight.- Domestic :A short-haul domestic flight is commonly categorized into being no longer than 1.5 hours in length, meaning that all domestic flights within a country such as the United Kingdom are short-haul...
distinctions:

A more specialised role of a cargo aircraft is that of transporting fuel in support of other aircraft with more limited flight endurance such as fighters or helicopters. Smaller cargo aircraft, known as "utility", are often used to transport military communications
Military communications
Historically, the first military communications had the form of sending/receiving simple signals . Respectively, the first distinctive tactics of military communications were called Signals, while units specializing in those tactics received the Signal Corps name...
equipment as temporary or permanent platforms, and in the command role by providing airborne command post or as an air ambulance
Air ambulance
An air ambulance is an aircraft used for emergency medical assistance in situations where either a traditional ambulance cannot reach the scene easily or quickly enough, or the patient needs to be transported over a distance or terrain that makes air transportation the most practical transport....
. 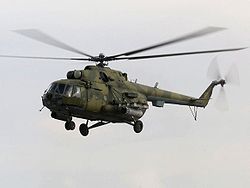 Military transport helicopters are used in places where the use of conventional aircraft is impossible. For example the military transport helicopter is the primary transport asset of US Marines deploying from LHDs and LHA
LHA (hull classification symbol)
thumb|right|300px|USS Tarawa LHA, for Landing Helicopter Assault, is the US Navy hull classification symbol for the general purpose helicopter-carrying amphibious assault ships of the Tarawa and the future America classes. They are used to transport Fleet Marine Force personnel and equipment while...
. The landing possibilities of helicopter are almost unlimited, and where landing is impossible, for example densely packed jungle, the ability of the helicopter to hover allows troops to deploy by abseiling
Abseiling
Abseiling , rappelling in American English, is the controlled descent down a rock face using a rope; climbers use this technique when a cliff or slope is too steep and/or dangerous to descend without protection.- Slang terms :...
and roping
Fast-roping
Fast-roping, sometimes known as Fast Rope Insertion Extraction System , is a technique for descending a thick rope. It is useful for deploying troops from a helicopter in places where the helicopter itself cannot touch down. First developed by the British with UK rope manufacturer Marlow Ropes,...
.

Transport helicopters are operated in assault, medium and heavy classes. Air assault
Air assault
Air assault is the movement of ground-based military forces by vertical take-off and landing aircraft—such as the helicopter—to seize and hold key terrain which has not been fully secured, and to directly engage enemy forces...
helicopters are usually the smallest of the transport types, and designed to move an infantry section and their equipment. Helicopters in the assault role are generally armed for self protection both in transit and for suppression of the landing zone
Landing Zone
A Landing Zone or "LZ" is a military term for any area where an aircraft can land.In the United States military, a landing zone is the actual point where aircraft land...
. This armament may be in the form of door gunners, or the modification of the helicopter with stub wings and pylons for the carriage of missiles and rocket pods. For example the Sikorsky S-70
Sikorsky S-70
The Sikorsky S-70 is a medium transport/utility helicopter family manufactured by Sikorsky Aircraft. It was developed for the U.S. Army in the 1970s, winning a competition to be designated the UH-60 Blackhawk and spawning a large family in U.S. military service...
fitted with the ESSM (External Stores Support System) and the Hip E variant of the Mil Mi-8 can carry as much disposable armament as some dedicated attack helicopters. The assault helicopter can be thought of as the modern successor to the military glider
Military glider
Military gliders have been used by the military of various countries for carrying troops and heavy equipment to a combat zone, mainly during the Second World War. These engineless aircraft were towed into the air and most of the way to their target by military transport planes, e.g...
.

Not all militaries are able to operate a full range of transport helicopters so the medium transport type as the most useful compromise is probably the most common specialist transport type. Medium transport helicopters are generally capable of moving up to a platoon of infantry and are capable of being able to transport towed artillery or light vehicles either internally or as under-slung roles. Unlike the assault helicopter they are usually not expected to land directly in a contested landing zone, but are used to reinforce and resupply landing zones taken by the initial assault wave. Examples include the unarmed versions of the Mil Mi-8, Super Puma
Eurocopter Super Puma
The Eurocopter AS332 Super Puma is a four-bladed, twin-engine, medium-size utility helicopter marketed for both civil and military use. Originally designed and built by Aérospatiale, it is an enlarged and re-engined version of the original Aérospatiale Puma...
, and CH-46 Sea Knight
CH-46 Sea Knight
The Boeing Vertol CH-46 Sea Knight is a medium-lift tandem rotor transport helicopter, used by the United States Marine Corps to provide all-weather, day-or-night assault transport of combat troops, supplies and equipment. Assault Support is its primary function, and the movement of supplies and...
.

Heavy lift helicopters are the largest and most capable of the transport types, currently limited in service to the CH-53 Sea Stallion
CH-53 Sea Stallion
The CH-53 Sea Stallion is the most common name for the Sikorsky S-65 family of heavy-lift transport helicopters. Originally developed for use by the United States Marine Corps, it is also in service with Germany, Iran, Israel, and Mexico...
and related CH-53E Super Stallion
CH-53E Super Stallion
The Sikorsky CH-53E Super Stallion is the largest and heaviest helicopter in the United States military. It was developed from the CH-53 Sea Stallion, mainly by adding a third engine, a seventh blade to the main rotor and canting the tail rotor 20 degrees. Sailors commonly refer to the Super...
, CH-47 Chinook
CH-47 Chinook
The Boeing CH-47 Chinook is an American twin-engine, tandem rotor heavy-lift helicopter. Its top speed of 170 knots is faster than contemporary utility and attack helicopters of the 1960s...
, Mil Mi-26
Mil Mi-26
The Mil Mi-26 is a Soviet/Russian heavy transport helicopter. In service with civilian and military operators, it is the largest and most powerful helicopter ever to have gone into production.-Design and development:...
, and Aérospatiale Super Frelon
Aérospatiale Super Frelon
The Aérospatiale SA 321 Super Frelon is a three-engined heavy transport helicopter produced by Aérospatiale of France. The helicopter is still in use in China where the locally produced version is known as the Z-8. "Frelon" is French for hornet....
. Capable of lifting up to 80 troops and moving small AFV
Armoured fighting vehicle
An armoured fighting vehicle is a combat vehicle, protected by strong armour and armed with weapons. AFVs can be wheeled or tracked....
s (usually as slung loads but also internally), these helicopters operate in the tactical transport
Airlift
Airlift is the act of transporting people or cargo from point to point using aircraft.Airlift may also refer to:*Airlift , a suction device for moving sand and silt underwater-See also:...
role in much the same way as small fixed wing turboprop
Turboprop
A turboprop engine is a type of turbine engine which drives an aircraft propeller using a reduction gear.The gas turbine is designed specifically for this application, with almost all of its output being used to drive the propeller...
air-lifters. The lower speed, range and increased fuel consumption of helicopters being more than compensated by their ability to operate anywhere.