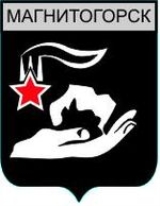 Encyclopedia
Magnitogorsk is a mining and industrial city in Chelyabinsk Oblast
Chelyabinsk Oblast
-External links:*...
, Russia
Russia
Russia or , officially known as both Russia and the Russian Federation , is a country in northern Eurasia. It is a federal semi-presidential republic, comprising 83 federal subjects...
, located on the eastern (Siberia
Siberia
Siberia is an extensive region constituting almost all of Northern Asia. Comprising the central and eastern portion of the Russian Federation, it was part of the Soviet Union from its beginning, as its predecessor states, the Tsardom of Russia and the Russian Empire, conquered it during the 16th...
n) side of the extreme southern extent of the Ural Mountains
Ural Mountains
The Ural Mountains , or simply the Urals, are a mountain range that runs approximately from north to south through western Russia, from the coast of the Arctic Ocean to the Ural River and northwestern Kazakhstan. Their eastern side is usually considered the natural boundary between Europe and Asia...
by the Ural River
Ural River
The Ural or Jayıq/Zhayyq , known as Yaik before 1775, is a river flowing through Russia and Kazakhstan. It arises in the southern Ural Mountains and ends at the Caspian Sea. Its total length is 1,511 mi making it the third longest river in Europe after the Volga and the Danube...
. Population: 418,545 (2002 Census
Russian Census (2002)
Russian Census of 2002 was the first census of the Russian Federation carried out on October 9 through October 16, 2002. It was carried out by the Russian Federal Service of State Statistics .-Resident population:...
);

'Magnitnaya' was founded in 1743 as part of the 'Orenburg
Orenburg
Orenburg is a city on the Ural River and the administrative center of Orenburg Oblast, Russia. It lies southeast of Moscow, very close to the border with Kazakhstan. Population: 546,987 ; 549,361 ; Highest point: 154.4 m...
Line' of forts. It remained insignificant until about 1929.

The rapid development of Magnitogorsk stood at the forefront of Joseph Stalin
Joseph Stalin
Joseph Vissarionovich Stalin was the Premier of the Soviet Union from 6 May 1941 to 5 March 1953. He was among the Bolshevik revolutionaries who brought about the October Revolution and had held the position of first General Secretary of the Communist Party of the Soviet Union's Central Committee...
's Five-Year Plan
Five-Year Plan (USSR)
The Five-Year Plans for the National Economy of the Soviet Union were a series of nation-wide centralized exercises in rapid economic development in the Soviet Union. The plans were developed by a state planning committee based on the Theory of Productive Forces that was part of the general...
s in the 1930s. It was a showpiece of Soviet achievement. Huge reserves of iron ore in the area made it a prime location to build a steel plant capable of challenging its Western rivals. However, a large proportion of the workforce, as ex-peasant
Peasant
A peasant is an agricultural worker who generally tend to be poor and homeless-Etymology:The word is derived from 15th century French païsant meaning one from the pays, or countryside, ultimately from the Latin pagus, or outlying administrative district.- Position in society :Peasants typically...
s, typically had few industrial skills and little industrial experience. To solve these issues, several hundred foreign specialists arrived to direct the work, including a team of architects headed by the German Ernst May
Ernst May
Ernst May was a German architect and city planner.May successfully applied urban design techniques to the city of Frankfurt am Main during Germany's Weimar period, and in 1930 less successfully exported those ideas to Soviet Union cities, newly created under Stalinist rule...
. 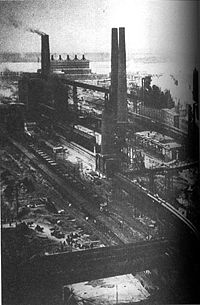 According to original plans Magnitogorsk was to be inspired by Gary, Indiana
Gary, Indiana
Gary is a city in Lake County, Indiana, United States. The city is in the southeastern portion of the Chicago metropolitan area and is 25 miles from downtown Chicago. The population is 80,294 at the 2010 census, making it the seventh-largest city in the state. It borders Lake Michigan and is known...
and Pittsburgh, Pennsylvania
Pittsburgh, Pennsylvania
Pittsburgh is the second-largest city in the US Commonwealth of Pennsylvania and the county seat of Allegheny County. Regionally, it anchors the largest urban area of Appalachia and the Ohio River Valley, and nationally, it is the 22nd-largest urban area in the United States...
, at the time the most prominent centers of steel production in the United States
United States
The United States of America is a federal constitutional republic comprising fifty states and a federal district...
. It was to have followed the linear city
Linear city
The linear city was an urban plan for an elongated urban formation. The city would consist of a series of functionally specialized parallel sectors. Generally, the city would run parallel to a river and be built so that the dominant wind would blow from the residential areas to the industrial strip...
design, with rows of similar superblock neighborhoods running parallel to the factory, with a strip of greenery, or greenbelt, separating them. Planners would align living and production spheres so as to minimize necessary travel time: workers would generally live in a sector of the residential band closest to the sector of the industrial band in which they worked.

However, by the time that May completed his plans for Magnitogorsk construction of both factory and housing had already started. The sprawling factory and enormous cleansing lakes had left little room available for development, and May, therefore, had to redesign his settlement to fit the modified site. This modification resulted in a city being more "rope-like" than linear. Although the industrial area is concentrated on the left bank of the river Ural, and the most residential complexes are separated and located on its right bank, the city inhabitants are still subjected to noxious fumes and factory smoke.

Town status was granted to Magnitogorsk in 1931.

In 1937 foreigners were told to exit and Magnitogorsk was declared a Closed city
Closed city
A closed city or closed town is a settlement with travel and residency restrictions in the Soviet Union and some of its successor countries. In modern Russia, such places are officially known as "closed administrative-territorial formations" ....
. There is not much reliable information about events and development of the city during the closed period.

The city played an important role during World War II because it supplied much of the steel for the Soviet war machine and its strategic location near the Ural Mountains
Ural Mountains
The Ural Mountains , or simply the Urals, are a mountain range that runs approximately from north to south through western Russia, from the coast of the Arctic Ocean to the Ural River and northwestern Kazakhstan. Their eastern side is usually considered the natural boundary between Europe and Asia...
meant Magnitogorsk was safe from seizure by the German Army.

With the depletion of the substantial local iron-ore reserves, Magnitogorsk has to import raw materials from Sokolvsko-Sarbaisky deposit in northern Kazakhstan
Kazakhstan
Kazakhstan , officially the Republic of Kazakhstan, is a transcontinental country in Central Asia and Eastern Europe. Ranked as the ninth largest country in the world, it is also the world's largest landlocked country; its territory of is greater than Western Europe...
.

Magnitogorsk was mentioned in the Blacksmith Institute
Blacksmith Institute
Founded in 1999, Blacksmith Institute is an international non-for-profit organization dedicated to eliminating life-threatening pollution in the developing world. Blacksmith identifies and cleans up the world's worst polluted places, focusing on communities where children are most at risk. Based in...
's 2006 survey of the world's worst polluted cities, placed in the report's unranked list of the 25 most polluted places outside the top ten. Pollutants include lead
Lead
Lead is a main-group element in the carbon group with the symbol Pb and atomic number 82. Lead is a soft, malleable poor metal. It is also counted as one of the heavy metals. Metallic lead has a bluish-white color after being freshly cut, but it soon tarnishes to a dull grayish color when exposed...
, sulfur dioxide
Sulfur dioxide
Sulfur dioxide is the chemical compound with the formula . It is released by volcanoes and in various industrial processes. Since coal and petroleum often contain sulfur compounds, their combustion generates sulfur dioxide unless the sulfur compounds are removed before burning the fuel...
, heavy metals and other air pollutants. According to the local hospital, only 1% of all children living in the city are in good health. The Blacksmith Institute says that, according to a local newspaper report, "only 28% of infants born in 1992 were healthy, and only 27% had healthy mothers."