Encyclopedia
The Paris Air Show is the world's oldest and largest air show
Air show
An air show is an event at which aviators display their flying skills and the capabilities of their aircraft to spectators in aerobatics. Air shows without aerobatic displays, having only aircraft displayed parked on the ground, are called "static air shows"....
. Established in 1909, it is currently held every odd year at Le Bourget Airport
Le Bourget Airport
Paris – Le Bourget Airport is an airport located in Le Bourget, Bonneuil-en-France, and Dugny, north-northeast of Paris, France. It is now used only for general aviation as well as air shows...
in north Paris, France
France
The French Republic , The French Republic , The French Republic , (commonly known as France , is a unitary semi-presidential republic in Western Europe with several overseas territories and islands located on other continents and in the Indian, Pacific, and Atlantic oceans. Metropolitan France...
. There have been 49 shows in total, including the most recent in 2011.

The Paris Air Show is organised by the French aerospace industry's primary representative body, the Groupement des Industries Françaises Aéronautiques et Spatiales (Gifas). It is a primarily commercial event, its main purpose being to demonstrate military and civilian aircraft to potential customers. It is widely considered the most prestigious aircraft exposition in the world; traditionally, major aircraft sales contracts are announced by manufacturers during the show. All major international manufacturers, as well as representatives of the military forces of several countries, attend the Paris Air Show.

In addition to industrial visitors, during the closing days of the salon, the show welcomes a large number of visitors from the general public, when admission is not limited to visitors with industry affiliations. Some other shows in the region include the Farnborough International Exhibition and Flying Display and the Internationale Luft- und Raumfahrtausstellung Berlin (ILA), although these happen on alternating years.

The Paris Air Show traces its history back to the first decade of the 20th century. In 1908, a section of the Paris Automobile Show was dedicated to aircraft. The following year, a dedicated air show was held at the Grand Palais
Grand Palais
This article contains material abridged and translated from the French and Spanish Wikipedia.The Grand Palais des Champs-Elysées, commonly known as the Grand Palais , is a large historic site, exhibition hall and museum complex located at the Champs-Élysées in the 8th arrondissement of Paris, France...
from 25 September to 17 October, during which 100,000 visitors turned out to see products and innovations from 380 exhibitors. There were four further shows before the First World War
World War I
World War I , which was predominantly called the World War or the Great War from its occurrence until 1939, and the First World War or World War I thereafter, was a major war centred in Europe that began on 28 July 1914 and lasted until 11 November 1918...
. The show re-started in 1919, and from 1924 it was held every two years before being interrupted again by the Second World War
World War II
World War II, or the Second World War , was a global conflict lasting from 1939 to 1945, involving most of the world's nations—including all of the great powers—eventually forming two opposing military alliances: the Allies and the Axis...
. It re-started again in 1946 and since 1949, has been held in every odd year.

The air show continued to be held at the Grand Palais, and from 1949 flying demonstrations were staged at Paris Orly Airport. In 1953, the show was relocated from the Grand Palais to Le Bourget. During the late 1960s and early 1970s, the show emerged as a powerful international rival to the Farnborough Airshow. The 1971 show featured a full scale mock-up of an Airbus A300
Airbus A300
The Airbus A300 is a short- to medium-range widebody jet airliner. Launched in 1972 as the world's first twin-engined widebody, it was the first product of Airbus Industrie, a consortium of European aerospace companies, wholly owned today by EADS...
while the new DC-10 and Lockheed Tristar were present at the 1973 edition. Among major accidents, there were two crashes of Convair B-58 Hustler bombers, in 1961 (during aerobatics) and 1965 (during landing).

At the Paris Air Show on June 3, 1973, the second Tupolev Tu-144
Tupolev Tu-144
The Tupolev Tu-144 was a Soviet supersonic transport aircraft and remains one of only two SSTs to enter commercial service, the other being the Concorde...
production aircraft (registration 77102) crashed during a display. It stalled while attempting a rapid climb. Trying to pull out of the subsequent dive, the aircraft broke up crashed, destroying 15 houses and killing all six on board and eight on the ground and a further 60 received serious injuries.

The causes of this incident remain controversial. Theories include: the Tu-144 tried to avoid a French Mirage chase plane which was attempting to photograph it, that changes had been made by the ground engineering team to the auto-stabilisation circtuits to allow the Tu-144 to outperform Concorde
Concorde
Aérospatiale-BAC Concorde was a turbojet-powered supersonic passenger airliner, a supersonic transport . It was a product of an Anglo-French government treaty, combining the manufacturing efforts of Aérospatiale and the British Aircraft Corporation...
in the display circuit, and that the crew were attempting a manoeuvre — to outshine Concorde — that the aircraft was not capable of.

The "38th Paris International Air and Space Show" or "1989 Paris Air Show", featured a variety of aerospace technology from NATO and Warsaw pact
Warsaw Pact
The Warsaw Treaty Organization of Friendship, Cooperation, and Mutual Assistance , or more commonly referred to as the Warsaw Pact, was a mutual defense treaty subscribed to by eight communist states in Eastern Europe...
nations.
A MiG 29 crashed during a demonstration flight with no loss of life. The then Soviet space shuttle Buran and its carrier Antonov An-225
Antonov An-225
The Antonov An-225 Mriya is a strategic airlift cargo aircraft, designed by the Antonov Design Bureau in the 1980s. It is the world's heaviest aircraft. The design, built in order to transport the Buran orbiter, was an enlargement of the successful An-124 Ruslan...
was displayed outside of Russia at this show.

The 2005 show, held 13–19 June, was the 46th show, and witnessed the return of American companies in large numbers following the downscaling of their presence in 2003 in relation to the Iraq War. Another strain in relations in 2005 was the recently launched World Trade Organisation litigation, which involved action filed by the United States against the EU member States alleging WTO-inconsistent subsidies to Airbus.

The Airbus A380
Airbus A380
The Airbus A380 is a double-deck, wide-body, four-engine jet airliner manufactured by the European corporation Airbus, a subsidiary of EADS. It is the largest passenger airliner in the world. Due to its size, many airports had to modify and improve facilities to accommodate it...
opened the show with a flying display 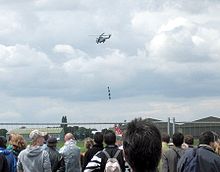 In 2007 the 47th show took place. At this show the Airbus A330 MRTT
Airbus A330 MRTT
The Airbus A330 Multi Role Tanker Transport is an aerial refuelling tanker aircraft based on the civilian Airbus A330-200. The A330 MRTT has been ordered by the Royal Australian Air Force , Royal Air Force , United Arab Emirates Air Force, and Royal Saudi Air Force...
tanker/transport, Antonov An-148
Antonov An-148
The Antonov An-148 Antonov Design Bureau from Kiev, Ukraine, is a regional jet aircraft designed by the Ukrainian Antonov Design Bureau and produced by Ukraine's Kiev Aviation Plant AVIANT and Russia's Voronezh Aircraft Production Association. Development of the plane was started in the 1990s,...
regional jet, Bell/Agusta BA609
Bell/Agusta BA609
The AgustaWestland AW609, formerly the Bell/Agusta BA609, is a civil twin-engined tiltrotor VTOL aircraft with a configuration similar to the Bell-Boeing V-22 Osprey.-Design and development:...
tilt-rotor, Socata TBM 850
Socata TBM
|-See also:-References:* Jackson, Paul. Jane's All The World's Aircraft 2003–2004. Coulsdon, UK: Jane's Information Group, 2003. ISBN 0 7106 2537 5....
and the S4 Ehécatl unmanned aircraft were presented for the first time.

The 48th International Paris Air Show took place in 2009 and marked a hundred years of technological innovation in aeronautics and space conquest. The event was held from 15 to 21 June, at Le Bourget.

The 2011 edition of the show is the 49th presentation, and hosts over international exhibitors in 28 international pavilions and has 150 aircraft, including the solar airplane Solar Impulse
Solar Impulse
Solar Impulse is a Swiss long-range solar powered plane project being undertaken at the École Polytechnique Fédérale de Lausanne, by Bertrand Piccard and André Borschberg. The project eventually hopes to succeed in the first circling of the earth with a piloted fixed-wing aircraft using only solar...
. The show is marked by the presence for the first time a Chinese manufacturer, COMAC
Commercial Aircraft Corporation of China
Commercial Aircraft Corporation of China, Ltd., or Comac, is a Chinese aerospace manufacturer established on 11 May 2008 in Shanghai, China. The company has a registered capital of RMB 19 billion...
- which according to industry analysts, should eventually become a competitor to Airbus
Airbus
Airbus SAS is an aircraft manufacturing subsidiary of EADS, a European aerospace company. Based in Blagnac, France, surburb of Toulouse, and with significant activity across Europe, the company produces around half of the world's jet airliners....
- and by the arrival of three new Boeing aircraft passenger and cargo versions of the 747-8
Boeing 747-8
The Boeing 747-8 is a wide-body jet airliner developed by Boeing Commercial Airplanes. Officially announced in 2005, the 747-8 is the fourth-generation Boeing 747 version, with lengthened fuselage, redesigned wings and improved efficiency...
and 787.

A demo A380 was damaged the day before the exhibition opened and needed a replacement. while the new military transport aircraft A400M had an engine failure, but could still perform some demonstration flights. Airbus took in a total of about 910 orders for $ 88 billion, including $ 60 billion for the A320neo ordered by GECAS U.S., while Boeing
Boeing Commercial Airplanes
Boeing Commercial Airplanes designs, assembles, markets and sells large commercial jet aircraft and provides product-related maintenance and training to customers worldwide...
announced orders for 141 totaling $ 22 billion. The show was attended by about and 200,000 visitors in the days open to the public with for the day of June 26, 2011.
This table includes options and controls included.