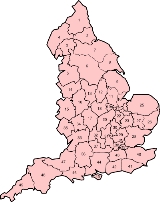 Additionally there was a County of London
County of London
The County of London was a county of England from 1889 to 1965, corresponding to the area known today as Inner London. It was created as part of the general introduction of elected county government in England, by way of the Local Government Act 1888. The Act created an administrative County of...
which covered the area today known as Inner London
Inner London
Inner London is the name for the group of London boroughs which form the interior part of Greater London and are surrounded by Outer London. The area was first officially defined in 1965 and for purposes such as statistics, the definition has changed over time. The terms Inner London and Central...
. The Isle of Wight
Isle of Wight
The Isle of Wight is a county and the largest island of England, located in the English Channel, on average about 2–4 miles off the south coast of the county of Hampshire, separated from the mainland by a strait called the Solent...
was originally included under the administrative county of Hampshire
Hampshire
Hampshire is a county on the southern coast of England in the United Kingdom. The county town of Hampshire is Winchester, a historic cathedral city that was once the capital of England. Hampshire is notable for housing the original birthplaces of the Royal Navy, British Army, and Royal Air Force...
but obtained its own county council in 1890.

In 1894 a uniform two-tier system was established outside the county boroughs and London, with subdivisions of the administrative counties called urban district
Urban district
In the England, Wales and Ireland, an urban district was a type of local government district that covered an urbanised area. Urban districts had an elected Urban District Council , which shared local government responsibilities with a county council....
s, rural district
Rural district
Rural districts were a type of local government area – now superseded – established at the end of the 19th century in England, Wales, and Ireland for the administration of predominantly rural areas at a level lower than that of the administrative counties.-England and Wales:In England...
s and municipal borough
Municipal borough
Municipal boroughs were a type of local government district which existed in England and Wales between 1835 and 1974, in Northern Ireland from 1840 to 1973 and in the Republic of Ireland from 1840 to 2002...
s. The structure was complete once the County of London was divided into metropolitan boroughs
Metropolitan boroughs of the County of London
The term metropolitan borough was used from 1900 to 1965, for the subdivisions of the County of London created by the London Government Act 1899....
in 1900.

Some exclaves had been left untouched by the 1844 Act, but in 1894
Local Government Act 1894
The Local Government Act 1894 was an Act of the Parliament of the United Kingdom that reformed local government in England and Wales outside the County of London. The Act followed the reforms carried out at county level under the Local Government Act 1888...
county councils were given the power to adjust county boundaries, and most anomalies were removed in the next few years. For example the Measham
Measham
Measham is a village in Leicestershire, near the Staffordshire and Derbyshire border, located just off the A42 just south of Ashby-de-la-Zouch, and within the National Forest...
area of Derbyshire
Derbyshire
Derbyshire is a county in the East Midlands of England. A substantial portion of the Peak District National Park lies within Derbyshire. The northern part of Derbyshire overlaps with the Pennines, a famous chain of hills and mountains. The county contains within its boundary of approx...
was transferred to Leicestershire
Leicestershire
Leicestershire is a landlocked county in the English Midlands. It takes its name from the heavily populated City of Leicester, traditionally its administrative centre, although the City of Leicester unitary authority is today administered separately from the rest of Leicestershire...
in 1897.

Monmouthshire
Monmouthshire (historic)
Monmouthshire , also known as the County of Monmouth , is one of thirteen ancient counties of Wales and a former administrative county....
, not shown on the map, was reckoned for some legal purposes among the English counties for most of this period.

In legislation and formal documents the suffix "shire
Shire
A shire is a traditional term for a division of land, found in the United Kingdom and in Australia. In parts of Australia, a shire is an administrative unit, but it is not synonymous with "county" there, which is a land registration unit. Individually, or as a suffix in Scotland and in the far...
" was generally not used: for example, Bedfordshire was referred to as "the administrative county of Bedford" and the Northamptonshire council as the "county council of Northampton". In the case of Lancashire and Cheshire the councils were officially the "county council of the palatine county". Shropshire was always officially entitled the "county of Salop". The right of Berkshire
Berkshire
Berkshire is a historic county in the South of England. It is also often referred to as the Royal County of Berkshire because of the presence of the royal residence of Windsor Castle in the county; this usage, which dates to the 19th century at least, was recognised by the Queen in 1957, and...
to be described as a "royal county" was recognised by the monarch in 1958. On April 1, 1959 the administrative county of Southampton was renamed as Hampshire.

The table lists the area and population of each administrative county at the censuses of 1891 and 1961.

The boundaries of the administrative counties changed considerably over time. The reasons for this were threefold: the growth of towns on either side of an existing boundary, the creation and extension of county boroughs and the elimination of outlying exclaves and other anomalies.

As urbanisation increased, and suburbs were built on a scale not seen before, the urban areas surrounding various towns and cities started to cross traditional county borders. The Local Government Act 1888
Local Government Act 1888
The Local Government Act 1888 was an Act of the Parliament of the United Kingdom, which established county councils and county borough councils in England and Wales...
provided that in the case that an urban sanitary district crossed a county border, the entire district would be considered part of the county in which the larger part was. This condition was maintained with the expansion of urban district
Urban district
In the England, Wales and Ireland, an urban district was a type of local government district that covered an urbanised area. Urban districts had an elected Urban District Council , which shared local government responsibilities with a county council....
s and municipal borough
Municipal borough
Municipal boroughs were a type of local government district which existed in England and Wales between 1835 and 1974, in Northern Ireland from 1840 to 1973 and in the Republic of Ireland from 1840 to 2002...
s.

Towns that were split by historic borders and were unified in one administrative county include Banbury
Banbury
Banbury is a market town and civil parish on the River Cherwell in the Cherwell District of Oxfordshire. It is northwest of London, southeast of Birmingham, south of Coventry and north northwest of the county town of Oxford...
, Mossley
Mossley
Mossley is a small town and civil parish within the Metropolitan Borough of Tameside, in Greater Manchester, England. The town is located in the upper section of the Tame valley in the foothills of the Pennines, northeast of Ashton-under-Lyne and east of Manchester.Mossley has the distinction of...
, Tamworth
Tamworth
Tamworth is a town and local government district in Staffordshire, England, located north-east of Birmingham city centre and north-west of London. The town takes its name from the River Tame, which flows through the town, as does the River Anker...
, Todmorden
Todmorden
Todmorden is a market town and civil parish, located 17 miles from Manchester, within the Metropolitan Borough of Calderdale, in West Yorkshire, England. It forms part of the Upper Calder Valley and has a total population of 14,941....
.

Urban districts to annex areas in another counties include:

On creation, many of the administrative counties had a number of exclaves. During the 1890s most of these were eliminated, with parishes being exchanged between counties. The boundaries of Gloucestershire, Worcestershire and Wiltshire contained numerous enclaves and exclaves, and were realigned in 1931.

Throughout the next century, debates took place about what should be done about local government in respect of the increasing urbanisation of the country. Proposals to expand or change county boroughs or to create larger urban counties were discussed, but nothing happened until 1963, when legislation was passed to come into effect in 1965.

The County of London was expanded and renamed Greater London
Greater London
Greater London is the top-level administrative division of England covering London. It was created in 1965 and spans the City of London, including Middle Temple and Inner Temple, and the 32 London boroughs. This territory is coterminate with the London Government Office Region and the London...
, taking three of the county boroughs, more of Surrey
Surrey
Surrey is a county in the South East of England and is one of the Home Counties. The county borders Greater London, Kent, East Sussex, West Sussex, Hampshire and Berkshire. The historic county town is Guildford. Surrey County Council sits at Kingston upon Thames, although this has been part of...
and Kent
Kent
Kent is a county in southeast England, and is one of the home counties. It borders East Sussex, Surrey and Greater London and has a defined boundary with Essex in the middle of the Thames Estuary. The ceremonial county boundaries of Kent include the shire county of Kent and the unitary borough of...
, parts of Essex
Essex
Essex is a ceremonial and non-metropolitan county in the East region of England, and one of the home counties. It is located to the northeast of Greater London. It borders with Cambridgeshire and Suffolk to the north, Hertfordshire to the west, Kent to the South and London to the south west...
and Hertfordshire
Hertfordshire
Hertfordshire is a ceremonial and non-metropolitan county in the East region of England. The county town is Hertford.The county is one of the Home Counties and lies inland, bordered by Greater London , Buckinghamshire , Bedfordshire , Cambridgeshire and...
and consuming nearly all of Middlesex
Middlesex
Middlesex is one of the historic counties of England and the second smallest by area. The low-lying county contained the wealthy and politically independent City of London on its southern boundary and was dominated by it from a very early time...
- the remaining parts being ceded to Surrey and Hertfordshire. Some other changes took place, such as the Soke of Peterborough
Soke of Peterborough
The Soke of Peterborough is an historic area of England that is traditionally associated with the City and Diocese of Peterborough, but considered part of Northamptonshire...
and Huntingdonshire
Huntingdonshire
Huntingdonshire is a local government district of Cambridgeshire, covering the area around Huntingdon. Traditionally it is a county in its own right...
being merged into Huntingdon and Peterborough
Huntingdon and Peterborough
Huntingdon and Peterborough was a short-lived administrative county in East Anglia in the United Kingdom. It existed from 1965 to 1974, when it became part of Cambridgeshire.-Formation:...
, and the merger of the original Cambridgeshire
Cambridgeshire
Cambridgeshire is a county in England, bordering Lincolnshire to the north, Norfolk to the northeast, Suffolk to the east, Essex and Hertfordshire to the south, and Bedfordshire and Northamptonshire to the west...
with the Isle of Ely
Isle of Ely
The Isle of Ely is a historic region around the city of Ely now in Cambridgeshire, England but previously a county in its own right.-Etymology:...
to form Cambridgeshire and Isle of Ely
Cambridgeshire and Isle of Ely
Cambridgeshire and Isle of Ely was, from 1965 to 1974, an administrative county of England. In 1974 it became part of an enlarged Cambridgeshire.-Formation:...
.

The map shows the counties and county boroughs just prior to their abolition in 1974.