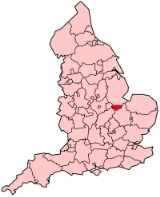 Overview
Peterborough is a cathedral city and unitary authority area
Unitary authorities of England
Unitary authorities of England are areas where a single local authority is responsible for a variety of services for a district that elsewhere are administered separately by two councils...
in the East of England
East of England
The East of England is one of the nine official regions of England. It was created in 1994 and was adopted for statistics from 1999. It includes the ceremonial counties of Essex, Hertfordshire, Bedfordshire, Cambridgeshire, Norfolk and Suffolk. Essex has the highest population in the region.Its...
, with an estimated population of in June 2007. For ceremonial
Ceremonial counties of England
The ceremonial counties are areas of England to which are appointed a Lord Lieutenant, and are defined by the government as counties and areas for the purposes of the Lieutenancies Act 1997 with reference to the metropolitan and non-metropolitan counties of England and Lieutenancies Act 1997...
purposes it is in the county
Counties of England
Counties of England are areas used for the purposes of administrative, geographical and political demarcation. For administrative purposes, England outside Greater London and the Isles of Scilly is divided into 83 counties. The counties may consist of a single district or be divided into several...
of Cambridgeshire
Cambridgeshire
Cambridgeshire is a county in England, bordering Lincolnshire to the north, Norfolk to the northeast, Suffolk to the east, Essex and Hertfordshire to the south, and Bedfordshire and Northamptonshire to the west...
. Situated 75 miles (120.7 km) north of London, the city stands on the River Nene
River Nene
The River Nene is a river in the east of England that rises from three sources in the county of Northamptonshire. The tidal river forms the border between Cambridgeshire and Norfolk for about . It is the tenth longest river in the United Kingdom, and is navigable for from Northampton to The...
which flows into the North Sea
North Sea
In the southwest, beyond the Straits of Dover, the North Sea becomes the English Channel connecting to the Atlantic Ocean. In the east, it connects to the Baltic Sea via the Skagerrak and Kattegat, narrow straits that separate Denmark from Norway and Sweden respectively...
approximately 30 miles (48.3 km) to the north-east. The railway station is an important stop on the East Coast Main Line
East Coast Main Line
The East Coast Main Line is a long electrified high-speed railway link between London, Peterborough, Doncaster, Wakefield, Leeds, York, Darlington, Newcastle and Edinburgh...
.

The local topography is flat and low-lying, and in some places lies below sea level.

When did the historical name of Burgh change to Peterborough? And did it ever belong to the diocese of Ely? I am trying to research an ancestor in 15...
More
x