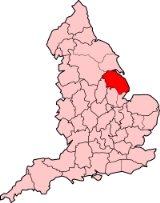 Encyclopedia
Lindsey was a unit of local government until 1974 in Lincolnshire
Lincolnshire
Lincolnshire is a county in the east of England. It borders Norfolk to the south east, Cambridgeshire to the south, Rutland to the south west, Leicestershire and Nottinghamshire to the west, South Yorkshire to the north west, and the East Riding of Yorkshire to the north. It also borders...
, England
England
England is a country that is part of the United Kingdom. It shares land borders with Scotland to the north and Wales to the west; the Irish Sea is to the north west, the Celtic Sea to the south west, with the North Sea to the east and the English Channel to the south separating it from continental...
, covering the northern part of the county. The Isle of Axholme
Isle of Axholme
The Isle of Axholme is part of North Lincolnshire, England. It is the only part of Lincolnshire west of the River Trent. It is between the three towns of Doncaster, Scunthorpe and Gainsborough.- Description:...
, which is on the west side of the River Trent
River Trent
The River Trent is one of the major rivers of England. Its source is in Staffordshire on the southern edge of Biddulph Moor. It flows through the Midlands until it joins the River Ouse at Trent Falls to form the Humber Estuary, which empties into the North Sea below Hull and Immingham.The Trent...
, has normally formed part of it. It originated with the Kingdom of Lindsey
Kingdom of Lindsey
Lindsey or Linnuis is the name of a petty Anglo-Saxon kingdom, absorbed into Northumbria in the 7th century.It lay between the Humber and the Wash, forming its inland boundaries from the course of the Witham and Trent rivers , and the Foss Dyke between...
in Anglo-Saxon times, whose territories were merged with that of Stamford
Stamford, Lincolnshire
Stamford is a town and civil parish within the South Kesteven district of the county of Lincolnshire, England. It is approximately to the north of London, on the east side of the A1 road to York and Edinburgh and on the River Welland...
to form Lincolnshire.

When the English shires
County
A county is a jurisdiction of local government in certain modern nations. Historically in mainland Europe, the original French term, comté, and its equivalents in other languages denoted a jurisdiction under the sovereignty of a count A county is a jurisdiction of local government in certain...
were established, it became part of Lincolnshire. It and each of Kesteven
Kesteven
The Parts of Kesteven are a traditional subdivision of Lincolnshire, England. This subdivision had long had a separate county administration , along with the other two parts, Lindsey and Holland.-Etymology:...
and Holland
Holland, Lincolnshire
Holland is an area of south-east Lincolnshire, England. The name is still recognised locally and survives in the district of South Holland.-Administration:...
, acquired the formal designation of Parts
Parts of Lincolnshire
The three Parts of the English county of Lincolnshire are or were divisions of the second-largest county in England. They existed as units of local government until it was reviewed in the 1970s...
. Thus it became the 'Parts of Lindsey'.

The map to the right, shows the districts of the now-defunct Humberside. The highlighted one is Glanford. To its east is Cleethorpes which surrounds Grimsby. To Glanford's west is Boothferry and the enclave within Glanford is Scunthorpe.

In 1996 these Humberside districts were re-grouped into unitary authorities
Unitary authority
A unitary authority is a type of local authority that has a single tier and is responsible for all local government functions within its area or performs additional functions which elsewhere in the relevant country are usually performed by national government or a higher level of sub-national...
. In other words, the new units perform the duties of both county and administrative district.