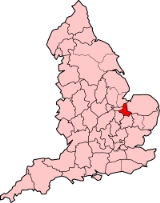 Encyclopedia
The Isle of Ely is a historic region around the city of Ely
Ely, Cambridgeshire
Ely is a cathedral city in Cambridgeshire, England, 14 miles north-northeast of Cambridge and about by road from London. It is built on a Lower Greensand island, which at a maximum elevation of is the highest land in the Fens...
now in Cambridgeshire
Cambridgeshire
Cambridgeshire is a county in England, bordering Lincolnshire to the north, Norfolk to the northeast, Suffolk to the east, Essex and Hertfordshire to the south, and Bedfordshire and Northamptonshire to the west...
, England
England
England is a country that is part of the United Kingdom. It shares land borders with Scotland to the north and Wales to the west; the Irish Sea is to the north west, the Celtic Sea to the south west, with the North Sea to the east and the English Channel to the south separating it from continental...
but previously a county in its own right.

Its name is said to mean "island of eel
Eel
Eels are an order of fish, which consists of four suborders, 20 families, 111 genera and approximately 800 species. Most eels are predators...
s", a reference to the creatures that were often caught in the local rivers for food. This etymology was first recorded by the Venerable Bede.

Until the 7th Century, the area was literally an island surrounded by a large area of fen
Fen
A fen is a type of wetland fed by mineral-rich surface water or groundwater. Fens are characterised by their water chemistry, which is neutral or alkaline, with relatively high dissolved mineral levels but few other plant nutrients...
land, a type of swamp. It was coveted as an area difficult to penetrate, and was controlled in the very early medieval period by the Gyrwas
Gyrwas
Gyrwas was the name of an Anglo-Saxon population of the Fens, divided into northern and southern groups and recorded in the Tribal Hidage; related to the name of Jarrow....
, a Saxon tribe. Upon their marriage in 652, Tondbert, a prince of the Gyrwas, presented Æthelthryth
Æthelthryth
Æthelthryth is the proper name for the popular Anglo-Saxon saint often known, particularly in a religious context, as Etheldreda or by the pet form of Audrey...
(a Saxon princess and later St. Æthelthryth) with the Isle of Ely. She afterwards founded a monastery at Ely, which was destroyed by Viking raiders in 870. The Fens were ultimately drained using a network of canals designed by Dutch experts.

The area's natural defences led to it playing a role in the military history of England. Following the Norman Conquest, the Isle became a refuge for English forces under Earl Morcar, Bishop Aethelwine of Durham and Hereward the Wake
Hereward the Wake
Hereward the Wake , known in his own times as Hereward the Outlaw or Hereward the Exile, was an 11th-century leader of local resistance to the Norman conquest of England....
in 1071. The area was taken by William only after a prolonged struggle.
In 1139 civil war
The Anarchy
The Anarchy or The Nineteen-Year Winter was a period of English history during the reign of King Stephen, which was characterised by civil war and unsettled government...
broke between the forces of King Stephen
Stephen of England
Stephen , often referred to as Stephen of Blois , was a grandson of William the Conqueror. He was King of England from 1135 to his death, and also the Count of Boulogne by right of his wife. Stephen's reign was marked by the Anarchy, a civil war with his cousin and rival, the Empress Matilda...
and the Empress Matilda
Empress Matilda
Empress Matilda , also known as Matilda of England or Maude, was the daughter and heir of King Henry I of England. Matilda and her younger brother, William Adelin, were the only legitimate children of King Henry to survive to adulthood...
. Bishop Nigel of Ely, a supporter of Matilda, unsuccessfully tried to hold the Isle. In 1143 Geoffrey de Mandeville
Geoffrey de Mandeville, 1st Earl of Essex
Geoffrey de Mandeville II, 1st Earl of Essex was one of the prominent players during the reign of King Stephen of England. His biographer, the 19th-century historian J. H...
rebelled against Stephen, and made his base in the Isle. Geoffrey was mortally wounded at Burwell
Burwell, Cambridgeshire
Burwell is a large fen-edge village and civil parish in Cambridgeshire, England, about 10 miles north east of Cambridge. It is situated on the south-eastern edge of The Fens, a large area of relatively flat former marshland which lies close to sea level and covers the majority of Cambridgeshire...
in 1144.
In 1216, during the First Barons' War
First Barons' War
The First Barons' War was a civil war in the Kingdom of England, between a group of rebellious barons—led by Robert Fitzwalter and supported by a French army under the future Louis VIII of France—and King John of England...
, the Isle was unsuccessfully defended against the army of King John
John of England
John , also known as John Lackland , was King of England from 6 April 1199 until his death...
. Ely took part in the Peasants' Revolt
Peasants' Revolt
The Peasants' Revolt, Wat Tyler's Rebellion, or the Great Rising of 1381 was one of a number of popular revolts in late medieval Europe and is a major event in the history of England. Tyler's Rebellion was not only the most extreme and widespread insurrection in English history but also the...
of 1381.

From 1107 until 1837 the Isle was under the jurisdiction of the Bishop of Ely
Bishop of Ely
The Bishop of Ely is the Ordinary of the Church of England Diocese of Ely in the Province of Canterbury. The diocese roughly covers the county of Cambridgeshire , together with a section of north-west Norfolk and has its see in the City of Ely, Cambridgeshire, where the seat is located at the...
, who appointed a Chief Justice of Ely and exercised temporal powers within the Liberty of Ely. This temporal jurisdiction originated in a charter granted by King Edgar
Edgar of England
Edgar the Peaceful, or Edgar I , also called the Peaceable, was a king of England . Edgar was the younger son of Edmund I of England.-Accession:...
in 970, and confirmed by Edward the Confessor
Edward the Confessor
Edward the Confessor also known as St. Edward the Confessor , son of Æthelred the Unready and Emma of Normandy, was one of the last Anglo-Saxon kings of England and is usually regarded as the last king of the House of Wessex, ruling from 1042 to 1066....
and Henry I
Henry I of England
Henry I was the fourth son of William I of England. He succeeded his elder brother William II as King of England in 1100 and defeated his eldest brother, Robert Curthose, to become Duke of Normandy in 1106...
to the abbot of Ely. The latter monarch established Ely as the seat of a bishop in 1107, creating the Isle of Ely a county palatine
County palatine
A county palatine or palatinate is an area ruled by an hereditary nobleman possessing special authority and autonomy from the rest of a kingdom or empire. The name derives from the Latin adjective palatinus, "relating to the palace", from the noun palatium, "palace"...
under the bishop. An act of parliament
Act of Parliament
An Act of Parliament is a statute enacted as primary legislation by a national or sub-national parliament. In the Republic of Ireland the term Act of the Oireachtas is used, and in the United States the term Act of Congress is used.In Commonwealth countries, the term is used both in a narrow...
in 1535/6 ended the palatine status of the Isle, with all justices of the peace to be appointed by letters patent
Letters patent
Letters patent are a type of legal instrument in the form of a published written order issued by a monarch or president, generally granting an office, right, monopoly, title, or status to a person or corporation...
issued under the great seal and warrants to be issued in the king's name. However, the bishop retained exclusive jurisdiction in civil and criminal matters, and was custos rotulorum
Custos rotulorum
Custos rotulorum is the keeper of an English county's records and, by virtue of that office, the highest civil officer in the county...
. A chief bailiff was appointed for life by the bishop, and performed the functions of high sheriff
High Sheriff
A high sheriff is, or was, a law enforcement officer in the United Kingdom, Canada and the United States.In England and Wales, the office is unpaid and partly ceremonial, appointed by the Crown through a warrant from the Privy Council. In Cornwall, the High Sheriff is appointed by the Duke of...
within the liberty, who also headed the government of the city of Ely.

The Liberty of Ely Act, 1837 ended the bishop's secular powers in the Isle. The area was declared a division of Cambridgeshire
Cambridgeshire
Cambridgeshire is a county in England, bordering Lincolnshire to the north, Norfolk to the northeast, Suffolk to the east, Essex and Hertfordshire to the south, and Bedfordshire and Northamptonshire to the west...
, with the right to appoint justices
Justice of the Peace
A justice of the peace is a puisne judicial officer elected or appointed by means of a commission to keep the peace. Depending on the jurisdiction, they might dispense summary justice or merely deal with local administrative applications in common law jurisdictions...
revested in the crown. Following the 1837 Act the Isle maintained separate Quarter Sessions
Quarter Sessions
The Courts of Quarter Sessions or Quarter Sessions were local courts traditionally held at four set times each year in the United Kingdom and other countries in the former British Empire...
, and formed its own constabulary.

The Isle of Ely County Council was granted a coat of arms
Coat of arms
A coat of arms is a unique heraldic design on a shield or escutcheon or on a surcoat or tabard used to cover and protect armour and to identify the wearer. Thus the term is often stated as "coat-armour", because it was anciently displayed on the front of a coat of cloth...
on 1 May 1931. Previous to the grant the council had been using the arms of Diocese of Ely
Diocese of Ely
The Diocese of Ely is a Church of England diocese in the Province of Canterbury. It is headed by the Bishop of Ely, who sits at Ely Cathedral in Ely. There is one suffragan bishop, the Bishop of Huntingdon. The diocese now covers Cambridgeshire and western Norfolk...
: Gules, three ducal coronets, two and one or. In the 1931 grant, silver and blue waves were added to the episcopal arms, to suggest that the county was an "isle". The crest above the shield was a human hand grasping a trident around which an eel was entwined, referring to the popular derivation of "Ely". On the wrist of the hand was a "Wake knot
Wake knot
The Wake knot , a type of decorative knot, is a heraldic knot used primarily in English heraldry. It is most notable for its appearance on the Wake family heraldic badge, where it is formed by an intertwining rope and strap.This knot is similar in appearance to a Carrick bend....
", representing Hereward the Wake.