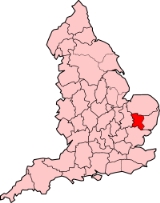 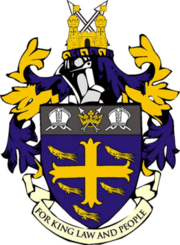 Before the introduction of county councils, Suffolk
Suffolk
Suffolk is a non-metropolitan county of historic origin in East Anglia, England. It has borders with Norfolk to the north, Cambridgeshire to the west and Essex to the south. The North Sea lies to the east...
had been divided into eastern and western divisions, each with their own quarter sessions
Quarter Sessions
The Courts of Quarter Sessions or Quarter Sessions were local courts traditionally held at four set times each year in the United Kingdom and other countries in the former British Empire...
. The western division corresponded to the Liberty of Saint Edmund. This area had been established by Edward the Confessor
Edward the Confessor
Edward the Confessor also known as St. Edward the Confessor , son of Æthelred the Unready and Emma of Normandy, was one of the last Anglo-Saxon kings of England and is usually regarded as the last king of the House of Wessex, ruling from 1042 to 1066....
in 1044 and was a separate jurisdiction under the control of the abbot of Bury St Edmunds Abbey until the dissolution of the monasteries
Dissolution of the Monasteries
The Dissolution of the Monasteries, sometimes referred to as the Suppression of the Monasteries, was the set of administrative and legal processes between 1536 and 1541 by which Henry VIII disbanded monasteries, priories, convents and friaries in England, Wales and Ireland; appropriated their...
.

This history was reflected in the coat of arms
Coat of arms
A coat of arms is a unique heraldic design on a shield or escutcheon or on a surcoat or tabard used to cover and protect armour and to identify the wearer. Thus the term is often stated as "coat-armour", because it was anciently displayed on the front of a coat of cloth...
of the county council. The council initially adopted the attributed arms of Edward the Confessor: a cross patonce between five martlet
Martlet
A martlet is a heraldic charge depicting a stylized bird with short tufts of feathers in the place of legs...
s. When the council received an official grant of arms from the College of Arms
College of Arms
The College of Arms, or Heralds’ College, is an office regulating heraldry and granting new armorial bearings for England, Wales and Northern Ireland...
in 1959, abbots' mitres and the emblem of St Edmund: crossed arrows through an open crown were added. The motto
Motto
A motto is a phrase meant to formally summarize the general motivation or intention of a social group or organization. A motto may be in any language, but Latin is the most used. The local language is usual in the mottoes of governments...
adopted was For King, Law and People, referring to the association of Magna Carta
Magna Carta
Magna Carta is an English charter, originally issued in the year 1215 and reissued later in the 13th century in modified versions, which included the most direct challenges to the monarch's authority to date. The charter first passed into law in 1225...
with Bury.

Shortly before its abolition the West Suffolk County Council commissioned Elizabeth Frink to sculpt a staue of St Edmund to commemorate the end of 970 years of independent administration of the area. The statue, in the grounds of the abbey of Bury St Edmunds, was completed in 1976.