The size of this inland sea remained largely stable from the 15th century onwards due to improvements in dikes, but when storms pushed North Sea water into the inlet, the Zuiderzee became a volatile cauldron of water, frequently resulting in flooding and the loss of ships. For example, on 18 November 1421, a seawall
Seawall
A seawall is a form of coastal defence constructed where the sea, and associated coastal processes, impact directly upon the landforms of the coast. The purpose of a seawall is to protect areas of human habitation, conservation and leisure activities from the action of tides and waves...
at the Zuiderzee dike broke, which flooded 72 villages and killed about 10,000 people. This was the Second St. Elizabeth's Flood: see Sint-Elisabethsvloed (1421).

Zuiderzee hosted the 6-meter and 8-meter sailing
Sailing at the 1928 Summer Olympics
Sailing/Yachting is a Olympic sport starting from the Games of the 1st Olympiad . With the exception of 1904 and possible 1916 sailing was always a part of the Olympic program....
events for the 1928 Summer Olympics
1928 Summer Olympics
The 1928 Summer Olympics, officially known as the Games of the IX Olympiad, was an international multi-sport event which was celebrated in 1928 in Amsterdam, Netherlands. Amsterdam had bid for the 1920 and 1924 Olympic Games, but had to give way to war-victim Antwerp, Belgium, and Pierre de...
held in neighboring Amsterdam
Amsterdam
Amsterdam is the largest city and the capital of the Netherlands. The current position of Amsterdam as capital city of the Kingdom of the Netherlands is governed by the constitution of August 24, 1815 and its successors. Amsterdam has a population of 783,364 within city limits, an urban population...
. 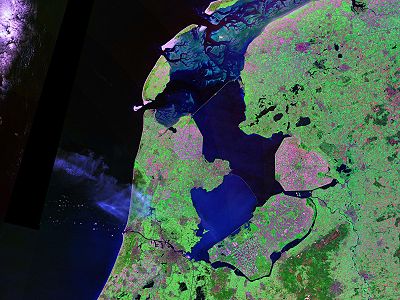 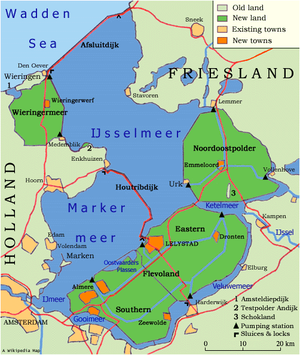 Around the Zuiderzee many fishing villages grew up and several developed into walled towns with extensive trade connections, in particular Kampen
Kampen (Overijssel)
Kampen is a municipality, a city and an old Hanseatic city at the lower reaches of the river IJssel in the Dutch province of Overijssel.The municipality of Kampen counts 50,073 inhabitants in an area of approximately 162 km² . Kampen is located in the North West of Overijssel and is the...
, a town in Overijssel
Overijssel
Overijssel is a province of the Netherlands in the central eastern part of the country. The region has a NUTS classification of NL21. The province's name means "Lands across river IJssel". The capital city of Overijssel is Zwolle and the largest city is Enschede...
, and later also towns in Holland such as Amsterdam
Amsterdam
Amsterdam is the largest city and the capital of the Netherlands. The current position of Amsterdam as capital city of the Kingdom of the Netherlands is governed by the constitution of August 24, 1815 and its successors. Amsterdam has a population of 783,364 within city limits, an urban population...
, Hoorn
Hoorn
-Cities :* Purmerend * Enkhuizen * Alkmaar * Amsterdam * Lelystad * Den Helder * Leeuwarden -Towns :* Edam...
, and Enkhuizen
Enkhuizen
Enkhuizen is a municipality and a town in the Netherlands, in the province of North Holland and the region of West-Frisia.Enkhuizen was one of the harbour-towns of the VOC, just like Hoorn and Amsterdam, from where overseas trade with the East Indies was conducted. It received city rights in 1355...
. These towns traded at first with ports on the Baltic Sea
Baltic Sea
The Baltic Sea is a brackish mediterranean sea located in Northern Europe, from 53°N to 66°N latitude and from 20°E to 26°E longitude. It is bounded by the Scandinavian Peninsula, the mainland of Europe, and the Danish islands. It drains into the Kattegat by way of the Øresund, the Great Belt and...
, in England, and in the Hanseatic League
Hanseatic League
The Hanseatic League was an economic alliance of trading cities and their merchant guilds that dominated trade along the coast of Northern Europe...
, but later also with the rest of the world, when the Netherlands established its colonial empire
Dutch Empire
The Dutch Empire consisted of the overseas territories controlled by the Dutch Republic and later, the modern Netherlands from the 17th to the 20th century. The Dutch followed Portugal and Spain in establishing an overseas colonial empire, but based on military conquest of already-existing...
. When that lucrative trade
Trade
Trade is the transfer of ownership of goods and services from one person or entity to another. Trade is sometimes loosely called commerce or financial transaction or barter. A network that allows trade is called a market. The original form of trade was barter, the direct exchange of goods and...
diminished, most of the towns fell back on fishing and some industry
Industry
Industry refers to the production of an economic good or service within an economy.-Industrial sectors:There are four key industrial economic sectors: the primary sector, largely raw material extraction industries such as mining and farming; the secondary sector, involving refining, construction,...
until the 20th century when tourism
Tourism
Tourism is travel for recreational, leisure or business purposes. The World Tourism Organization defines tourists as people "traveling to and staying in places outside their usual environment for not more than one consecutive year for leisure, business and other purposes".Tourism has become a...
became the major source of income. Contained within the Zuiderzee were four small islands, the remains of what were once larger islands or peninsula
Peninsula
A peninsula is a piece of land that is bordered by water on three sides but connected to mainland. In many Germanic and Celtic languages and also in Baltic, Slavic and Hungarian, peninsulas are called "half-islands"....
s connected to the mainland
Mainland
Mainland is a name given to a large landmass in a region , or to the largest of a group of islands in an archipelago. Sometimes its residents are called "Mainlanders"...
. These were Wieringen
Wieringen
Wieringen is a municipality in the Netherlands, in the province of North Holland. It consists of a former island, also named Wieringen, and there are plans to make Wieringen an island again by widening the Amsteldiepkanaal into a lake called the Wieringerrandmeer.-Population centres :The...
, Urk
Urk
Urk is a municipality and a town in the Flevoland province in the central Netherlands.Urk is first mentioned in historical records dating to the 10th century, when it was still an island in the Almere, a lake that would become part of the Zuiderzee in the 13th century after a series of incursions...
, Schokland
Schokland
Schokland is a former island in the Dutch Zuiderzee. Schokland lost its status as an island when the Noordoostpolder was reclaimed from the sea in 1942...
, and Marken
Marken
Marken is a peninsula in the IJsselmeer, the Netherlands, located in the municipality Waterland in the province North Holland. It is an island, which nowadays is connected to the North Holland mainland by a causeway. Also, Marken is a well-known tourist attraction, well-known for its characteristic...
. The inhabitants of these islands also subsisted mainly on fishing and related industries and still do in the case of Urk and Wieringen. All of these islands are now part of the mainland or connected to it.