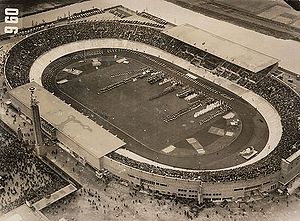 The 1928 Summer Olympics, officially known as the Games of the IX Olympiad, was an international
International
----International mostly means something that involves more than one country. The term international as a word means involvement of, interaction between or encompassing more than one nation, or generally beyond national boundaries...
multi-sport event
Multi-sport event
A multi-sport event is an organized sporting event, often held over multiple days, featuring competition in many different sports between organized teams of athletes from nation-states. The first major, modern, multi-sport event of international significance was the modern Olympic Games.Many...
which was celebrated in 1928 in Amsterdam
Amsterdam
Amsterdam is the largest city and the capital of the Netherlands. The current position of Amsterdam as capital city of the Kingdom of the Netherlands is governed by the constitution of August 24, 1815 and its successors. Amsterdam has a population of 783,364 within city limits, an urban population...
, Netherlands
Netherlands
The Netherlands is a constituent country of the Kingdom of the Netherlands, located mainly in North-West Europe and with several islands in the Caribbean. Mainland Netherlands borders the North Sea to the north and west, Belgium to the south, and Germany to the east, and shares maritime borders...
. Amsterdam had bid for the 1920 and 1924 Olympic Games
Olympic Games
The Olympic Games is a major international event featuring summer and winter sports, in which thousands of athletes participate in a variety of competitions. The Olympic Games have come to be regarded as the world’s foremost sports competition where more than 200 nations participate...
, but had to give way to war-victim Antwerp, Belgium
Belgium
Belgium , officially the Kingdom of Belgium, is a federal state in Western Europe. It is a founding member of the European Union and hosts the EU's headquarters, and those of several other major international organisations such as NATO.Belgium is also a member of, or affiliated to, many...
, and Pierre de Coubertin
Pierre de Coubertin
Pierre de Frédy, Baron de Coubertin was a French educationalist and historian, founder of the International Olympic Committee, and is considered the father of the modern Olympic Games...
's Paris
Paris
Paris is the capital and largest city in France, situated on the river Seine, in northern France, at the heart of the Île-de-France region...
, respectively. The only other candidate city for the 1928 Games was Los Angeles
Los Angeles, California
Los Angeles , with a population at the 2010 United States Census of 3,792,621, is the most populous city in California, USA and the second most populous in the United States, after New York City. It has an area of , and is located in Southern California...
, which would host the Olympics four years later.

During the Summer Olympics, there were 15 sports and 109 events in the tournament. In parentheses is the number of events per sport.

Women's athletics and gymnastics
Gymnastics
Gymnastics is a sport involving performance of exercises requiring physical strength, flexibility, agility, coordination, and balance. Internationally, all of the gymnastic sports are governed by the Fédération Internationale de Gymnastique with each country having its own national governing body...
debuted at these Olympics, in spite of criticism. Halina Konopacka
Halina Konopacka
Halina Konopacka , famous athlete, first Polish Olympic Champion . She took part in the Olympic Games in Amsterdam, where she won a gold medal in discus throw breaking her own world record...
of Poland
Poland
Poland , officially the Republic of Poland , is a country in Central Europe bordered by Germany to the west; the Czech Republic and Slovakia to the south; Ukraine, Belarus and Lithuania to the east; and the Baltic Sea and Kaliningrad Oblast, a Russian exclave, to the north...
became the first female Olympic track and field champion. The 800 meter run ended with several of the competitors being completely exhausted, so running events for women longer than 200 meters were not included in the Olympics until the 1960s.

Tennis
Tennis
Tennis is a sport usually played between two players or between two teams of two players each . Each player uses a racket that is strung to strike a hollow rubber ball covered with felt over a net into the opponent's court. Tennis is an Olympic sport and is played at all levels of society at all...
disappeared from the program, only to reappear in 1968 as a demonstration sport
Tennis at the 1968 Summer Olympics
Tennis returned to the Summer Olympic program as a demonstration event in 1968. Men's and women's singles and doubles and mixed doubles were held in both a Demonstration tournament and an Exhibition tournament. Both tournaments were held in Guadalajara, Mexico.-Demonstration:-Exhibition:-External...
.

A total of 46 nations were represented at the Amsterdam Games. Malta
Malta
Malta , officially known as the Republic of Malta , is a Southern European country consisting of an archipelago situated in the centre of the Mediterranean, south of Sicily, east of Tunisia and north of Libya, with Gibraltar to the west and Alexandria to the east.Malta covers just over in...
, Panama
Panama
Panama , officially the Republic of Panama , is the southernmost country of Central America. Situated on the isthmus connecting North and South America, it is bordered by Costa Rica to the northwest, Colombia to the southeast, the Caribbean Sea to the north and the Pacific Ocean to the south. The...
, and Rhodesia
Southern Rhodesia
Southern Rhodesia was the name of the British colony situated north of the Limpopo River and the Union of South Africa. From its independence in 1965 until its extinction in 1980, it was known as Rhodesia...
(now Zimbabwe
Zimbabwe
Zimbabwe is a landlocked country located in the southern part of the African continent, between the Zambezi and Limpopo rivers. It is bordered by South Africa to the south, Botswana to the southwest, Zambia and a tip of Namibia to the northwest and Mozambique to the east. Zimbabwe has three...
) competed at the Olympic Games for the first time. Germany
Germany
Germany , officially the Federal Republic of Germany , is a federal parliamentary republic in Europe. The country consists of 16 states while the capital and largest city is Berlin. Germany covers an area of 357,021 km2 and has a largely temperate seasonal climate...
returned after having been banned in 1920 and 1924.

These are the top ten nations that won medals at these Games. 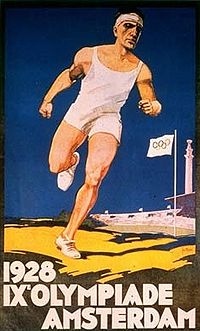 The official poster for the Games was designed by Jos Rovers, and 10,000 copies were made. The poster displays a running man in a white shirt, with in the background the Olympic stadium and the Olympic flag (shown above). The IOC never succeeded in getting the copyright of the image. Therefore, out of practical considerations, the IOC has used a different poster, with the German
German language
German is a West Germanic language, related to and classified alongside English and Dutch. With an estimated 90 – 98 million native speakers, German is one of the world's major languages and is the most widely-spoken first language in the European Union....
text Olympische Spiele, and an athlete partly covered in the Dutch national flag, holding a peace leaf in his hand. This poster was made for a German book about the Amsterdam Olympics.