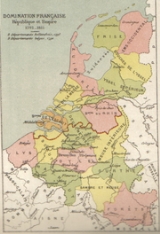 Encyclopedia
A Dutch province represents the administrative layer in between the national government and the local municipalities, having the responsibility for matters of subnational or regional importance. The government of each province consists of three major parts: the Provinciale Staten which is the provincial parliament elected every four years. Elected from its members are the Gedeputeerde Staten
Gedeputeerde Staten
The gedeputeerde staten are the executive councillors of a Dutch province. Together with the Queen's Commissioner they form the College van Commissaris van de Koningin en Gedeputeerde Staten, which is the executive council of the province. States Deputed are elected by the States Provincial, the...
, a college charged with most executive tasks, presided by the Commissaris van de Koningin appointed by the Crown.

The modern-day Netherlands
Netherlands
The Netherlands is a constituent country of the Kingdom of the Netherlands, located mainly in North-West Europe and with several islands in the Caribbean. Mainland Netherlands borders the North Sea to the north and west, Belgium to the south, and Germany to the east, and shares maritime borders...
is divided into twelve province
Province
A province is a territorial unit, almost always an administrative division, within a country or state.-Etymology:The English word "province" is attested since about 1330 and derives from the 13th-century Old French "province," which itself comes from the Latin word "provincia," which referred to...
s (provincies in Dutch
Dutch language
Dutch is a West Germanic language and the native language of the majority of the population of the Netherlands, Belgium, and Suriname, the three member states of the Dutch Language Union. Most speakers live in the European Union, where it is a first language for about 23 million and a second...
).


Regions and their capitals

The twelve provinces are listed below with their capital city:

Public bodies of the Netherlands

The three public bodies
Public body (Netherlands)
In the Netherlands, the term public body is the general denomination for administrative divisions within the Dutch state, such as the central government, a province, a municipality or a water board...
of the Bonaire, Sint Eustatius and Saba, became part of the Netherlands proper on October 10, 2010, but are not part of any province.

Nearly all Dutch provinces can trace their origin to a medieval state, such as a county
County
A county is a jurisdiction of local government in certain modern nations. Historically in mainland Europe, the original French term, comté, and its equivalents in other languages denoted a jurisdiction under the sovereignty of a count A county is a jurisdiction of local government in certain...
or a duchy
Duchy
A duchy is a territory, fief, or domain ruled by a duke or duchess.Some duchies were sovereign in areas that would become unified realms only during the Modern era . In contrast, others were subordinate districts of those kingdoms that unified either partially or completely during the Medieval era...
, as can the provinces of regions in Belgium. Their status changed when they came under a single ruler who centralised their administration, somewhat relegating the separate states to provinces, 17 in total. From these unified Netherlands, seven northern provinces would form the Republic of the Seven United Provinces in the 17th century, namely Holland, Zeeland, Gelderland, Utrecht, Friesland, Overijssel and Groningen. The Republic's lands also included Drenthe (one of the 17, but without the autonomous status of the others), and parts of Brabant
Duchy of Brabant
The Duchy of Brabant was a historical region in the Low Countries. Its territory consisted essentially of the three modern-day Belgian provinces of Flemish Brabant, Walloon Brabant and Antwerp, the Brussels-Capital Region and most of the present-day Dutch province of North Brabant.The Flag of...
, Limburg and Flanders
Flanders
Flanders is the community of the Flemings but also one of the institutions in Belgium, and a geographical region located in parts of present-day Belgium, France and the Netherlands. "Flanders" can also refer to the northern part of Belgium that contains Brussels, Bruges, Ghent and Antwerp...
, which were considered to be "conquered lands" and were governed directly by the Staten-Generaal, the parliament, hence their name Generality Lands
Generality Lands
The Generality Lands, Lands of the Generality or Common Lands were about one fifth of the territories of the United Provinces of the Netherlands, that were directly governed by the States-General...
. They were called Staats-Brabant, Staats-Limburg and Staats-Vlaanderen, meaning "state-owned". Each of these "Netherlands" had a high degree of autonomy, co-operating with each other mainly on defense and on the international level in general, but keeping to their own affairs elsewhere.

On January 1, 1796, during the Batavian Republic
Batavian Republic
The Batavian Republic was the successor of the Republic of the United Netherlands. It was proclaimed on January 19, 1795, and ended on June 5, 1806, with the accession of Louis Bonaparte to the throne of the Kingdom of Holland....
, Drenthe and Staats-Brabant became the eighth and ninth provinces of the Netherlands; the latter known as Bataafs Brabant, Batavian Brabant, changing its name to Noord Brabant, North Brabant, in 1815 when it became part of the United Kingdom of the Netherlands
United Kingdom of the Netherlands
United Kingdom of the Netherlands is the unofficial name used to refer to Kingdom of the Netherlands during the period after it was first created from part of the First French Empire and before the new kingdom of Belgium split out in 1830...
, which also contained (then) South Brabant, a province in Belgium
Belgium
Belgium , officially the Kingdom of Belgium, is a federal state in Western Europe. It is a founding member of the European Union and hosts the EU's headquarters, and those of several other major international organisations such as NATO.Belgium is also a member of, or affiliated to, many...
. This new unified state featured the provinces in their modern form, as non-autonomous subdivisions of the national state, and again numbering 17 provinces, though not all the same as the 16th century ones. In 1839, with the independence of Belgium, the original single province of Limburg was divided amongst the two countries, each now having a province called Limburg. A year later, Holland, the largest and most populous of the Dutch provinces, was also split into two provinces for a total of 11. The 12th member was to be Flevoland
Flevoland
Flevoland is a province of the Netherlands. Located in the centre of the country, at the location of the former Zuiderzee, the province was established on January 1, 1986; the twelfth province of the country, with Lelystad as its capital...
, a province consisting almost entirely of reclaimed land, established on January 1, 1986.


The Departments of the French Period

During the Batavian Republic, the Netherlands was from 1798 to 1801 completely reorganised into eight new departments, most named after rivers, inspired by the French
France
The French Republic , The French Republic , The French Republic , (commonly known as France , is a unitary semi-presidential republic in Western Europe with several overseas territories and islands located on other continents and in the Indian, Pacific, and Atlantic oceans. Metropolitan France...
revolutionary example, in an attempt to do away with the old semi-autonomous status of the provinces. They are listed below, with their capitals and the territory of the former provinces that they mostly incorporated:


After only three years, following a coup d'etat
Coup d'état
A coup d'état state, literally: strike/blow of state)—also known as a coup, putsch, and overthrow—is the sudden, extrajudicial deposition of a government, usually by a small group of the existing state establishment—typically the military—to replace the deposed government with another body; either...
, the borders of the former provinces were restored, though not their autonomous status. They were now also called "departments" and Drenthe was added to Overijssel. In 1806 the Kingdom of Holland
Kingdom of Holland
The Kingdom of Holland 1806–1810 was set up by Napoleon Bonaparte as a puppet kingdom for his third brother, Louis Bonaparte, in order to better control the Netherlands. The name of the leading province, Holland, was now taken for the whole country...
replaced the republic to further French interests. It was during this administration that Holland was first split in two, with the department of Amstelland to the north and that of Maasland to the south. East Frisia
East Frisia
East Frisia or Eastern Friesland is a coastal region in the northwest of the German federal state of Lower Saxony....
, then as now in Germany
Germany
Germany , officially the Federal Republic of Germany , is a federal parliamentary republic in Europe. The country consists of 16 states while the capital and largest city is Berlin. Germany covers an area of 357,021 km2 and has a largely temperate seasonal climate...
, was added to the kingdom as a department in 1807 and Drenthe split off again making a total of 11 departments. 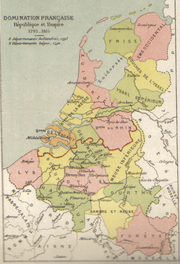 When the Netherlands finally did become fully part of France in 1810, the departments of the kingdom and their borders were largely maintained, with some joined together. They were however nearly all renamed, again mainly after rivers, though the names differed from their Batavian counterparts. Following are their names and the modern day province they corresponded for the most part to: