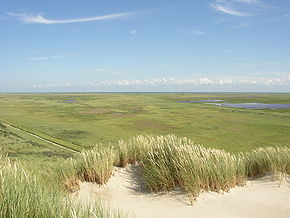 Terschelling is a municipality
Municipality
A municipality is essentially an urban administrative division having corporate status and usually powers of self-government. It can also be used to mean the governing body of a municipality. A municipality is a general-purpose administrative subdivision, as opposed to a special-purpose district...
and an island
Island
An island or isle is any piece of sub-continental land that is surrounded by water. Very small islands such as emergent land features on atolls can be called islets, cays or keys. An island in a river or lake may be called an eyot , or holm...
in the northern Netherlands
Netherlands
The Netherlands is a constituent country of the Kingdom of the Netherlands, located mainly in North-West Europe and with several islands in the Caribbean. Mainland Netherlands borders the North Sea to the north and west, Belgium to the south, and Germany to the east, and shares maritime borders...
, one of the West Frisian Islands
West Frisian Islands
The West Frisian Islands are a chain of islands in the North Sea off the Dutch coast, along the edge of the Wadden Sea. They continue further east as the German East Frisian Islands and are part of the Frisian Islands....
.

Waddenislanders are known for their resourcefulness in using anything and everything that washes ashore. With few trees to use for timber, most of the farms and barns are built with masts recovered from shipwrecks. The islands are surrounded by shipwrecks, and even today many containers wash ashore that are blown off the decks of cargo ships in the North Sea.

The main source of income on Terschelling is tourism. There is some agriculture, but a large part of the island has become a nature reserve.

Terschelling is well-known for the yearly Oerol Festival
Oerol Festival
Oerol is the name of a Frisian summer festival that takes place each June on the island of Terschelling. The 10-day festival is focused on live, public theatre as well as music and the visual arts....
during which theatre-performances are played throughout the island, making use of its landscape and nature.

The island in its current shape was formed in the Middle Ages
Middle Ages
The Middle Ages is a periodization of European history from the 5th century to the 15th century. The Middle Ages follows the fall of the Western Roman Empire in 476 and precedes the Early Modern Era. It is the middle period of a three-period division of Western history: Classic, Medieval and Modern...
from a sandy area called De Schelling in the west and the original island Wexalia in the east. The name Wexalia, Wuxalia, or Wecsile is the medieval name of eastern Terschelling. However this name disappeared at the end of the Middle Ages. The last appearance of the name Wexalia is in a treaty between Folkerus Reijner Popma, then ruler of Terschelling, with king Edward IV of England in 1482.

The oldest traces of civilisation on Terschelling date from around 850, when a small wooden church was built on a hill near Seerip or Strip. This hill was later used as a burial ground and is known as the ”Striperkerkhof”.

In 1666 West-Terschelling was ransacked by the English. The English fleet originally planned to attack the Dutch merchant fleet which was moored before the coast of Vlieland
Vlieland
Vlieland is a municipality in the northern Netherlands. The municipality of Vlieland has only one major town: Oost-Vlieland . It is the second-least densely populated municipality in the Netherlands ....
, the next island to the west. When the Dutch vessels retreated towards Terschelling, the English followed, destroyed 150 Dutch vessels, and landed in the harbour of West-Terschelling. The town was burnt to the ground by the English on this occasion which would become known as "Holmes's Bonfire
Holmes's Bonfire
Holmes's Bonfire was a raid on the Vlie estuary in the Netherlands, executed by the Royal Navy during the Second Anglo-Dutch War on 19 and 20 August 1666 . The attack, named after the commander of the landing force, Rear-Admiral Robert Holmes, was successful in destroying by fire a large merchant...
" after the English admiral Holmes, the Great Fire of London
Great Fire of London
The Great Fire of London was a major conflagration that swept through the central parts of the English city of London, from Sunday, 2 September to Wednesday, 5 September 1666. The fire gutted the medieval City of London inside the old Roman City Wall...
in the very same year was considered by some to have been God's retribution.
The next year, in 1667, the Dutch under command of De Ruyter
Michiel de Ruyter
Michiel Adriaenszoon de Ruyter is the most famous and one of the most skilled admirals in Dutch history. De Ruyter is most famous for his role in the Anglo-Dutch Wars of the 17th century. He fought the English and French and scored several major victories against them, the best known probably...
executed a retaliatory expedition, and dealt the English navy a heavy blow at the Raid on the Medway
Raid on the Medway
The Raid on the Medway, sometimes called the Battle of the Medway, Raid on Chatham or the Battle of Chatham, was a successful Dutch attack on the largest English naval ships, laid up in the dockyards of their main naval base Chatham, that took place in June 1667 during the Second Anglo-Dutch War...
(also known as the Battle of Chatham), in effect ending the Second Anglo-Dutch War
Second Anglo-Dutch War
The Second Anglo–Dutch War was part of a series of four Anglo–Dutch Wars fought between the English and the Dutch in the 17th and 18th centuries for control over the seas and trade routes....
.

Although Dutch
Dutch language
Dutch is a West Germanic language and the native language of the majority of the population of the Netherlands, Belgium, and Suriname, the three member states of the Dutch Language Union. Most speakers live in the European Union, where it is a first language for about 23 million and a second...
is the national language of the Netherlands, on Terschelling both Dutch and Frisian
West Frisian language
West Frisian is a language spoken mostly in the province of Friesland in the north of the Netherlands. West Frisian is the name by which this language is usually known outside the Netherlands, to distinguish it from the closely related Frisian languages of Saterland Frisian and North Frisian,...
are spoken. Frisian is said to be the closest living relative to Early English. Historically on the western side and on the eastern side of the island Frisian dialects dominated. Whereas a Dutch dialect called Midslands was the main language of Midsland and the surrounding area on the center of the island. The use of the three dialects is on the decline on Terschelling and all dialects are slowly being replaced by the standard Dutch language.

The island is known for being the only Wadden island where cranberries
Cranberry
Cranberries are a group of evergreen dwarf shrubs or trailing vines in the subgenus Oxycoccus of the genus Vaccinium. In some methods of classification, Oxycoccus is regarded as a genus in its own right...
grow. In 1840, a barrel of cranberries, apparently packed by sailors as an antiscorbutic, washed ashore on the island's coast, and the islanders cultivated them for their own sailors.

The cranberries, finding the environment favourable, established themselves on the island. Nowadays, the cranberry fields cover 0.48 km² (0.185329036124417 sq mi) or 48 ha (119 acre). The cranberries are mainly sold to tourists and used by the island's restaurants and bakeries, who compete continually with each other to make the tastiest cranberry delicacies.