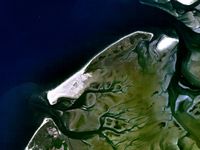 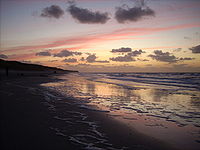 Vlieland is a municipality
Municipality
A municipality is essentially an urban administrative division having corporate status and usually powers of self-government. It can also be used to mean the governing body of a municipality. A municipality is a general-purpose administrative subdivision, as opposed to a special-purpose district...
in the northern Netherlands
Netherlands
The Netherlands is a constituent country of the Kingdom of the Netherlands, located mainly in North-West Europe and with several islands in the Caribbean. Mainland Netherlands borders the North Sea to the north and west, Belgium to the south, and Germany to the east, and shares maritime borders...
. The municipality of Vlieland has only one major town: Oost-Vlieland
Oost-Vlieland
Oost-Vlieland is a small — and the only —village on the island of Vlieland in the province Friesland of the Netherlands and has about 1150 citizens. It is situated on the east end of the island as its name indicates: Oost means "east" in Dutch....
(West Frisian: East-Flylân). It is the second-least densely populated
Population density
Population density is a measurement of population per unit area or unit volume. It is frequently applied to living organisms, and particularly to humans...
municipality in the Netherlands (after Schiermonnikoog
Schiermonnikoog
Schiermonnikoog is an island, a municipality, and a national park in the northern Netherlands. Schiermonnikoog is one of the West Frisian Islands, and is part of the province of Friesland....
).

Vlieland is one of the West Frisian Islands
West Frisian Islands
The West Frisian Islands are a chain of islands in the North Sea off the Dutch coast, along the edge of the Wadden Sea. They continue further east as the German East Frisian Islands and are part of the Frisian Islands....
, lying in the Wadden Sea
Wadden Sea
The Wadden Sea is an intertidal zone in the southeastern part of the North Sea. It lies between the coast of northwestern continental Europe and the range of Frisian Islands, forming a shallow body of water with tidal flats and wetlands. It is rich in biological diversity...
. It is the second island from the west in the chain, lying between Texel
Texel
Texel is a municipality and an island in the Netherlands, in the province of North Holland. It is the biggest and most populated of the Frisian Islands in the Wadden Sea, and also the westernmost of this archipelago, which extends to Denmark...
and Terschelling
Terschelling
Terschelling is a municipality and an island in the northern Netherlands, one of the West Frisian Islands.Waddenislanders are known for their resourcefulness in using anything and everything that washes ashore. With few trees to use for timber, most of the farms and barns are built with masts...
. Vlieland was named after the Vlie
Vlie
The Vlie or Vliestroom is the seaway between the Dutch islands of Vlieland, to its southwest, and Terschelling, to its northeast. The Vlie was the estuary of the river IJssel in medieval times...
.

Vlieland can be reached by ferry from the Frisian town of Harlingen
Harlingen, Netherlands
Harlingen is a municipality and a city in the northern Netherlands, in the province of Friesland at the Wadden Sea. Harlingen is an old town with a long history of fishing and shipping....
. The ferry ride takes about 1.5 hours and crosses the Wadden Sea
Wadden Sea
The Wadden Sea is an intertidal zone in the southeastern part of the North Sea. It lies between the coast of northwestern continental Europe and the range of Frisian Islands, forming a shallow body of water with tidal flats and wetlands. It is rich in biological diversity...
and part of the North Sea
North Sea
In the southwest, beyond the Straits of Dover, the North Sea becomes the English Channel connecting to the Atlantic Ocean. In the east, it connects to the Baltic Sea via the Skagerrak and Kattegat, narrow straits that separate Denmark from Norway and Sweden respectively...
. Tourists are not allowed to bring cars with them on the ferry. Another ferry runs between De Cocksdorp on Texel and the westernmost point of Vlieland. The most common form of transport on the island is the bicycle; a network of cycle paths criss-crosses the island. A bus service runs from the ferry terminal to the village and campgrounds after the arrival of a ferry, and some time before departure. There is a very small heliport
Vlieland Heliport
Vlieland heliport is a small heliport used mainly by the Royal Netherlands Air Force for search and rescue flights or medical transports from the island of Vlieland. It is home to one Agusta-Bell 412SP rescue helicopter, which is usually stationed on the island during the day and at Leeuwarden Air...
near the village, but it is only used for SAR
Search and rescue
Search and rescue is the search for and provision of aid to people who are in distress or imminent danger.The general field of search and rescue includes many specialty sub-fields, mostly based upon terrain considerations...
flights.

The majority of the landscape of the island consists of dunes
Dune
In physical geography, a dune is a hill of sand built by wind. Dunes occur in different forms and sizes, formed by interaction with the wind. Most kinds of dunes are longer on the windward side where the sand is pushed up the dune and have a shorter "slip face" in the lee of the wind...
, but there are some wooded areas and small meadows. A large part of the island, the western part, consists mainly of sand and is referred to as the 'Sahara of the north'.

Tourism is the main source of income on Vlieland. There are approximately 15 hotels, and several hundred apartments and holiday homes. Vlieland has two campgrounds.