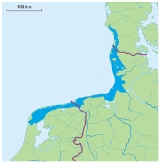 Encyclopedia
The Wadden Sea is an intertidal zone
Intertidal zone
The intertidal zone is the area that is above water at low tide and under water at high tide . This area can include many different types of habitats, with many types of animals like starfish, sea urchins, and some species of coral...
in the southeastern part of the North Sea
North Sea
In the southwest, beyond the Straits of Dover, the North Sea becomes the English Channel connecting to the Atlantic Ocean. In the east, it connects to the Baltic Sea via the Skagerrak and Kattegat, narrow straits that separate Denmark from Norway and Sweden respectively...
. It lies between the coast of northwestern continental Europe
Europe
Europe is, by convention, one of the world's seven continents. Comprising the westernmost peninsula of Eurasia, Europe is generally 'divided' from Asia to its east by the watershed divides of the Ural and Caucasus Mountains, the Ural River, the Caspian and Black Seas, and the waterways connecting...
and the range of Frisian Islands
Frisian Islands
The Frisian Islands, also known as the Wadden Islands or Wadden Sea Islands, form an archipelago at the eastern edge of the North Sea in northwestern Europe, stretching from the north-west of the Netherlands through Germany to the west of Denmark...
, forming a shallow body of water with tidal flats and wetlands. It is rich in biological diversity
Biodiversity
Biodiversity is the degree of variation of life forms within a given ecosystem, biome, or an entire planet. Biodiversity is a measure of the health of ecosystems. Biodiversity is in part a function of climate. In terrestrial habitats, tropical regions are typically rich whereas polar regions...
. In 2009, the Dutch and German parts of the Wadden Sea were inscribed on UNESCO
UNESCO
The United Nations Educational, Scientific and Cultural Organization is a specialized agency of the United Nations...
's World Heritage List.

According to C. Michael Hogan, the Wadden Sea is one of the world's seas whose coastline has been most modified by human
Human
Humans are the only living species in the Homo genus...
s, via systems of dikes and causeway
Causeway
In modern usage, a causeway is a road or railway elevated, usually across a broad body of water or wetland.- Etymology :When first used, the word appeared in a form such as “causey way” making clear its derivation from the earlier form “causey”. This word seems to have come from the same source by...
s on the mainland and low lying coastal islands. The Wadden Sea stretches from Den Helder
Den Helder
Den Helder is a municipality and a city in the Netherlands, in the province of North Holland. Den Helder occupies the northernmost point of the North Holland peninsula...
in the Netherlands
Netherlands
The Netherlands is a constituent country of the Kingdom of the Netherlands, located mainly in North-West Europe and with several islands in the Caribbean. Mainland Netherlands borders the North Sea to the north and west, Belgium to the south, and Germany to the east, and shares maritime borders...
in the southwest, past the great river estuaries
Estuary
An estuary is a partly enclosed coastal body of water with one or more rivers or streams flowing into it, and with a free connection to the open sea....
of Germany
Germany
Germany , officially the Federal Republic of Germany , is a federal parliamentary republic in Europe. The country consists of 16 states while the capital and largest city is Berlin. Germany covers an area of 357,021 km2 and has a largely temperate seasonal climate...
to its northern boundary at Skallingen north of Esbjerg
Esbjerg
Esbjerg Municipality is a municipality in Region of Southern Denmark on the west coast of the Jutland peninsula in southwest Denmark. Its mayor is Johnny Søtrup, from the Venstre political party...
in Denmark
Denmark
Denmark is a Scandinavian country in Northern Europe. The countries of Denmark and Greenland, as well as the Faroe Islands, constitute the Kingdom of Denmark . It is the southernmost of the Nordic countries, southwest of Sweden and south of Norway, and bordered to the south by Germany. Denmark...
along a total length of some 500 km and a total area of about 10,000 km². Within the Netherlands it is bounded from the IJsselmeer
IJsselmeer
IJsselmeer is a shallow artificial lake of 1100 km² in the central Netherlands bordering the provinces of Flevoland, North Holland and Friesland, with an average depth of 5 to 6 m. The Ĳsselmeer is the largest lake in Western Europe....
by the Afsluitdijk
Afsluitdijk
The Afsluitdijk is a major causeway in the Netherlands, constructed between 1927 and 1933 and running from Den Oever on Wieringen in North Holland province, to the village of Zurich in Friesland province, over a length of and a width of 90 m, at an initial height of 7.25 m above sea-level.It is...
.

The islands in the Wadden Sea are called the Wadden Sea Islands or Frisian Islands, named after the Frisians. However, on the westernmost Dutch island, Texel
Texel
Texel is a municipality and an island in the Netherlands, in the province of North Holland. It is the biggest and most populated of the Frisian Islands in the Wadden Sea, and also the westernmost of this archipelago, which extends to Denmark...
, the Frisian language
West Frisian language
West Frisian is a language spoken mostly in the province of Friesland in the north of the Netherlands. West Frisian is the name by which this language is usually known outside the Netherlands, to distinguish it from the closely related Frisian languages of Saterland Frisian and North Frisian,...
has not been spoken for centuries. The Danish Wadden Sea Islands
Danish Wadden Sea Islands
The Danish Wadden Sea Islands are a group of islands on the western coast of Jutland, Denmark. They belong to the new region of Southern Denmark since January 1, 2007...
have never been inhabited by Frisians. The outlying German island of Heligoland
Heligoland
Heligoland is a small German archipelago in the North Sea.Formerly Danish and British possessions, the islands are located in the Heligoland Bight in the south-eastern corner of the North Sea...
, although ethnically one of the Frisian Islands, is not situated in the Wadden Sea.

The word wad is Dutch for "mud flat" (Low German
Low German
Low German or Low Saxon is an Ingvaeonic West Germanic language spoken mainly in northern Germany and the eastern part of the Netherlands...
and ). The area is typified by extensive tidal mud flats, deeper tidal trenches (tidal creeks
Creek (tidal)
A tidal creek, tidal channel, or estuary is the portion of a stream that is affected by ebb and flow of ocean tides, in the case that the subject stream discharges to an ocean, sea or strait. Thus this portion of the stream has variable salinity and electrical conductivity over the tidal cycle...
) and the island
Island
An island or isle is any piece of sub-continental land that is surrounded by water. Very small islands such as emergent land features on atolls can be called islets, cays or keys. An island in a river or lake may be called an eyot , or holm...
s that are contained within this, a region continually contested by land and sea. The landscape has been formed for a great part by storm tide
Storm tide
A storm tide is a tide with a high flood period caused by a storm. Storm tides can be a severe danger to the coast and the people living along the coast. The water level can rise to more than 5 meters above the normal tide....
s in the 10th to 14th centuries, overflowing and carrying away former peat
Peat
Peat is an accumulation of partially decayed vegetation matter or histosol. Peat forms in wetland bogs, moors, muskegs, pocosins, mires, and peat swamp forests. Peat is harvested as an important source of fuel in certain parts of the world...
land behind the coastal dunes. The present islands are a remnant of the former coastal dunes.

The islands are marked by dunes and wide, sandy beaches towards the North Sea and a low, tidal coast towards the Wadden Sea. The impact of waves and currents, carrying away sediment
Sediment
Sediment is naturally occurring material that is broken down by processes of weathering and erosion, and is subsequently transported by the action of fluids such as wind, water, or ice, and/or by the force of gravity acting on the particle itself....
s, is slowly changing the layout of the islands. For example, the islands of Vlieland
Vlieland
Vlieland is a municipality in the northern Netherlands. The municipality of Vlieland has only one major town: Oost-Vlieland . It is the second-least densely populated municipality in the Netherlands ....
and Ameland
Ameland
Ameland is a municipality and one of the West Frisian Islands off the north coast of the Netherlands. It consists mostly of sand dunes. It is the third major island of the West Frisians. It neighbours islands Terschelling to the West and Schiermonnikoog to the East...
have moved eastwards through the centuries, having lost land on one side and grown on the other.

The Wadden Sea is famous for its rich flora and fauna, especially birds. Hundred of thousands of waders (shorebirds)
Wader
Waders, called shorebirds in North America , are members of the order Charadriiformes, excluding the more marine web-footed seabird groups. The latter are the skuas , gulls , terns , skimmers , and auks...
, duck
Duck
Duck is the common name for a large number of species in the Anatidae family of birds, which also includes swans and geese. The ducks are divided among several subfamilies in the Anatidae family; they do not represent a monophyletic group but a form taxon, since swans and geese are not considered...
s, and geese
Goose
The word goose is the English name for a group of waterfowl, belonging to the family Anatidae. This family also includes swans, most of which are larger than true geese, and ducks, which are smaller....
use the area as a migration
Bird migration
Bird migration is the regular seasonal journey undertaken by many species of birds. Bird movements include those made in response to changes in food availability, habitat or weather. Sometimes, journeys are not termed "true migration" because they are irregular or in only one direction...
stopover or wintering site, and it is also rich habitat for gull
Gull
Gulls are birds in the family Laridae. They are most closely related to the terns and only distantly related to auks, skimmers, and more distantly to the waders...
s and tern
Tern
Terns are seabirds in the family Sternidae, previously considered a subfamily of the gull family Laridae . They form a lineage with the gulls and skimmers which in turn is related to skuas and auks...
s.

In June 2009, the Wadden Sea (comprising the Dutch Wadden Sea Conservation Area and the German Wadden Sea National Parks of Lower Saxony and Schleswig-Holstein) was placed on the World Heritage list by UNESCO
UNESCO
The United Nations Educational, Scientific and Cultural Organization is a specialized agency of the United Nations...
.

Many of the islands have been popular seaside resort
Seaside resort
A seaside resort is a resort, or resort town, located on the coast. Where a beach is the primary focus for tourists, it may be called a beach resort.- Overview :...
s since the 19th century.

Mudflat hiking (Dutch: Wadlopen), i.e., walking on the sandy flats at low tide, has become popular in the Wadden Sea.

It is also a popular region for pleasure boating.