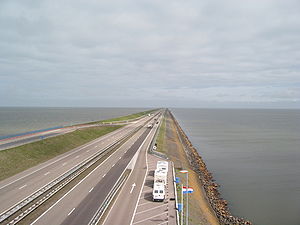 The Afsluitdijk (ˈɑfslœy̆ˌdɛi̯k; English
English language
English is a West Germanic language that arose in the Anglo-Saxon kingdoms of England and spread into what was to become south-east Scotland under the influence of the Anglian medieval kingdom of Northumbria...
: Enclosure Dam
Dam
A dam is a barrier that impounds water or underground streams. Dams generally serve the primary purpose of retaining water, while other structures such as floodgates or levees are used to manage or prevent water flow into specific land regions. Hydropower and pumped-storage hydroelectricity are...
, Frisian
West Frisian language
West Frisian is a language spoken mostly in the province of Friesland in the north of the Netherlands. West Frisian is the name by which this language is usually known outside the Netherlands, to distinguish it from the closely related Frisian languages of Saterland Frisian and North Frisian,...
: Ofslútdyk) is a major causeway
Causeway
In modern usage, a causeway is a road or railway elevated, usually across a broad body of water or wetland.- Etymology :When first used, the word appeared in a form such as “causey way” making clear its derivation from the earlier form “causey”. This word seems to have come from the same source by...
in the Netherlands
Netherlands
The Netherlands is a constituent country of the Kingdom of the Netherlands, located mainly in North-West Europe and with several islands in the Caribbean. Mainland Netherlands borders the North Sea to the north and west, Belgium to the south, and Germany to the east, and shares maritime borders...
, constructed between 1927 and 1933 and running from Den Oever
Den Oever
Den Oever is a village in the Dutch province of North Holland. It is a part of the municipality of Wieringen, and lies about east of Den Helder...
on Wieringen
Wieringen
Wieringen is a municipality in the Netherlands, in the province of North Holland. It consists of a former island, also named Wieringen, and there are plans to make Wieringen an island again by widening the Amsteldiepkanaal into a lake called the Wieringerrandmeer.-Population centres :The...
in North Holland
North Holland
North Holland |West Frisian]]: Noard-Holland) is a province situated on the North Sea in the northwest part of the Netherlands. The provincial capital is Haarlem and its largest city is Amsterdam.-Geography:...
province, to the village of Zurich (in the municipality of Wûnseradiel
Wûnseradiel
Wûnseradiel is a former municipality in the Friesland province of the northern Netherlands, at the eastern end of the Afsluitdijk. The official name of the municipality is in the West Frisian language, though it is known as Wonseradeel in Dutch...
) in Friesland
Friesland
Friesland is a province in the north of the Netherlands and part of the ancient region of Frisia.Until the end of 1996, the province bore Friesland as its official name. In 1997 this Dutch name lost its official status to the Frisian Fryslân...
province, over a length of 32 kilometres (19.9 mi) and a width of 90 m, at an initial height of 7.25 m above sea-level.

It is a fundamental part of the larger Zuiderzee Works
Zuiderzee Works
The Zuiderzee Works are a manmade system of dams, land reclamation and water drainage works, the largest hydraulic engineering project undertaken by the Netherlands during the twentieth century. The project involved the damming of the Zuiderzee, a large, shallow inlet of the North Sea, and the...
, damming off the Zuiderzee, a salt water inlet of the North Sea
North Sea
In the southwest, beyond the Straits of Dover, the North Sea becomes the English Channel connecting to the Atlantic Ocean. In the east, it connects to the Baltic Sea via the Skagerrak and Kattegat, narrow straits that separate Denmark from Norway and Sweden respectively...
and turning it into the fresh water lake of the IJsselmeer
IJsselmeer
IJsselmeer is a shallow artificial lake of 1100 km² in the central Netherlands bordering the provinces of Flevoland, North Holland and Friesland, with an average depth of 5 to 6 m. The Ĳsselmeer is the largest lake in Western Europe....
.

Previous experiences had demonstrated that till
Till
thumb|right|Closeup of glacial till. Note that the larger grains in the till are completely surrounded by the matrix of finer material , and this characteristic, known as matrix support, is diagnostic of till....
(boulder clay), rather than just sand or clay, was the best primary material for a structure like the Afsluitdijk, with the added benefit that till was in plentiful supply in the area; it could be retrieved in large quantities by simply dredging it from the bottom of the Zuiderzee. Work started at four points: on both sides of the mainland and on two specially made construction-islands (Kornwerderzand
Kornwerderzand
Kornwerderzand is a settlement on the Afsluitdijk, a major dam in the Netherlands that links Frisia with North Holland. Kornwerderzand is located approximately 4 kilometers from the coast of Frisia, on a former artificial island which was created during the construction of the dam. The settlement...
and Breezand) along the line of the future dike
Levee
A levee, levée, dike , embankment, floodbank or stopbank is an elongated naturally occurring ridge or artificially constructed fill or wall, which regulates water levels...
.

From these points, the dike slowly grew by ships depositing till into the open sea in two parallel lines. Sand was then poured in between the two dikes and as it emerged above the surface was then covered by another layer of till. The nascent dike was then strengthened from land by basalt rocks and mats of willow switch at its base. The dike could then be finished off by raising it further with sand and finally clay for the surface of the dike, on which grass was planted.

Construction progressed better than expected; at three points along the line of the dike there were deeper underwater trenches where the tidal current was much stronger than elsewhere. These had been considered to be major obstacles to completing the dike, but all of them proved to be relatively straightforward. On 28 May 1932, two years earlier than initially thought, the Zuiderzee ceased to be, as the last tidal trench, The Vlieter, was closed by a final bucket of till. The IJsselmeer was born, even though it was still salty at the time.

The dike itself however was not finished yet as it still needed to be brought up to its required height and a road linking Friesland and North Holland (the current A7
A7 motorway (Netherlands)
The A7 motorway is a motorway in the Netherlands connecting Zaandam, via the Afsluitdijk, Sneek and Groningen to the German border near Bad Nieuweschans. The entire road is part of the European route E22, with exception of the first kilometre, between the terminus in Zaandam and the interchange...
/E22
European route E22
The European route E 22 is one of the longest European routes. It has a length of about . Many of the E-roads have been extended into Asia since the year 2000; the E 22 was extended on 24 June 2002.-United Kingdom:...
motorway) also remained to be built. It would not be until 25 September 1933, that the Afsluitdijk was officially opened, with a monument designed by architect Dudok
Willem Marinus Dudok
Willem Marinus Dudok , was a Dutch modernist architect, best known for the brick Hilversum City Hall....
marking the spot where the dike had been closed. The amount of material used is estimated at 23 million m³ of sand and 13.5 million m³ of till and over the years an average of around four to five thousand workers were involved with the construction every day, relieving some of the unemployment following the Great Depression
Great Depression
The Great Depression was a severe worldwide economic depression in the decade preceding World War II. The timing of the Great Depression varied across nations, but in most countries it started in about 1929 and lasted until the late 1930s or early 1940s...
.
Beside the dike itself there was also the necessary construction of two complexes of shipping locks and discharge sluice
Sluice
A sluice is a water channel that is controlled at its head by a gate . For example, a millrace is a sluice that channels water toward a water mill...
s at both ends of the dike. The complex at Den Oever includes the Stevin lock (named after Hendric Stevin, a son of mathematician
Mathematician
A mathematician is a person whose primary area of study is the field of mathematics. Mathematicians are concerned with quantity, structure, space, and change....
and engineer
Engineer
An engineer is a professional practitioner of engineering, concerned with applying scientific knowledge, mathematics and ingenuity to develop solutions for technical problems. Engineers design materials, structures, machines and systems while considering the limitations imposed by practicality,...
Simon Stevin
Simon Stevin
Simon Stevin was a Flemish mathematician and military engineer. He was active in a great many areas of science and engineering, both theoretical and practical...
) and three series of five sluices for discharging the IJsselmeer into the Wadden Sea
Wadden Sea
The Wadden Sea is an intertidal zone in the southeastern part of the North Sea. It lies between the coast of northwestern continental Europe and the range of Frisian Islands, forming a shallow body of water with tidal flats and wetlands. It is rich in biological diversity...
; the other complex at Kornwerderzand is composed of the Lorentz locks (named after Hendrik Lorentz
Hendrik Lorentz
Hendrik Antoon Lorentz was a Dutch physicist who shared the 1902 Nobel Prize in Physics with Pieter Zeeman for the discovery and theoretical explanation of the Zeeman effect...
, the famous physicist
Physicist
A physicist is a scientist who studies or practices physics. Physicists study a wide range of physical phenomena in many branches of physics spanning all length scales: from sub-atomic particles of which all ordinary matter is made to the behavior of the material Universe as a whole...
, who personally did the calculations of the tides that were crucial to the construction of the Afsluitdijk) and two series of five sluices, making a total of 25 discharge sluices. Periodically discharging the lake is necessary since it is continually fed by rivers and streams (most notably the IJssel
IJssel
River IJssel , sometimes called Gelderse IJssel to avoid confusion with its Hollandse IJssel namesake in the west of the Netherlands, is a branch of the Rhine in the Dutch provinces of Gelderland and Overijssel...
river that gives its name to the lake) and polders draining their water into the IJsselmeer.

Provision for a railway line linking North Holland and Friesland (between Anna Paulowna
Anna Paulowna
Anna Paulowna is a municipality and a town in the Netherlands, in the province of North Holland. The municipality derives its name from the Anna Paulownapolder, which was laid dry in 1846 during the reign of King William II of the Netherlands and in turn named after his wife, Queen Anna Pavlovna...
and Harlingen) had been included on the Afsluitdijk, in the form of a linear reservation, along with extra drawbridge
Drawbridge
A drawbridge is a type of movable bridge typically associated with the entrance of a castle surrounded by a moat. The term is often used to describe all different types of movable bridges, like bascule bridges and lift bridges.-Castle drawbridges:...
abutments at the locks. However, construction of the line was never undertaken by the NS
Nederlandse Spoorwegen
Nederlandse Spoorwegen , or NS, is the principal passenger railway operator in the Netherlands.Its trains operate over the tracks of the Dutch national railinfrastructure, operated by ProRail, which was split off from NS in 2003...
, for reasons of cost and relative lack of benefits. The reservation and abutments for the rail line were utilized instead for a second carriageway for the dike's two-lane highway in the 1970s, transforming the latter into today's four-lane A7 motorway.