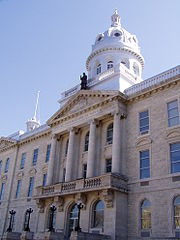 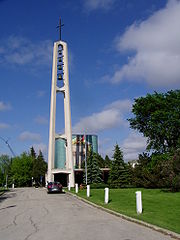 The University of Manitoba has three main locations—the Bannatyne Campus, the Fort Garry Campus and the William Norrie Centre.

The downtown Bannatyne campus of the University comprises a complex of ten buildings located west of the Health Sciences Centre
Health Sciences Centre (Winnipeg)
The Health Sciences Centre is the largest hospital in Winnipeg, Manitoba, Canada. It serves the residents of Northwest Ontario and Nunavut as both a teaching hospital and as a research centre. The Health Sciences Center is a tertiary care hospital, encompassing many different specialty medical...
between McDermot Ave and William Ave in Central Winnipeg. This complex houses the medical and dental instructional units of the University. The Faculty of Dentistry, the Faculty of Medicine, the School of Medical Rehabilitation, and the School of Dental Hygiene
Dental hygienist
thumb|right|300px|Dental hygienist holding a scalerA dental hygienist is a licensed dental professional who specializes in preventive oral health, typically focusing on techniques in oral hygiene. Local dental regulations determine the scope of practice of dental hygienists...
are the major health sciences units located on this campus. The Faculty of Pharmacy officially joined the Bannatyne campus with the opening of the 95000 sq ft (8,825.8 m²) Apotex Centre on October 16, 2008.

The main Fort Garry Campus (located on the Red River
Red River of the North
The Red River is a North American river. Originating at the confluence of the Bois de Sioux and Otter Tail rivers in the United States, it flows northward through the Red River Valley and forms the border between the U.S. states of Minnesota and North Dakota before continuing into Manitoba, Canada...
in south Winnipeg) comprises over 60 teaching and research buildings of the University and sits on 233 hectares (575.8 acre) of land. In addition, Smartpark is the location of seven buildings leased to research and development organizations involving university-industry partnerships.

The William Norrie Centre on Selkirk Avenue is the campus for social work education for inner-city residents.

The University also operates agricultural research stations near Glenlea and Carman, Manitoba
Carman, Manitoba
Carman is a small Agricultural town of about 2,900 people that lies in the Pembina Valley Region of southern Manitoba. Carman is located at the junction of Highways 3 and 13, just 40 minutes southwest of Winnipeg . It is surrounded by the Rural Municipality of Dufferin...
. The Ian N. Morrison Research Farm near Carman is a 406 acres (164.3 ha) facility located 70 km (43.5 mi) from Winnipeg, while the Glenlea facility is approximately 1000 acres (405 ha) and located 20 km (12.4 mi) from Winnipeg.

The University of Manitoba is a non-denominational university, founded by Alexander Morris, that received a charter on February 28, 1877. It officially opened on June 20, 1877 to confer degrees on students graduating from its three founding colleges - St. Boniface College
Collège universitaire de Saint-Boniface
The Université de Saint-Boniface, or USB, is a university college affiliated with the University of Manitoba and located in the Saint Boniface district of Winnipeg, Manitoba , Canada....
(Roman Catholic/Francophone
Francophone
The adjective francophone means French-speaking, typically as primary language, whether referring to individuals, groups, or places. Often, the word is used as a noun to describe a natively French-speaking person....
), St John's College
St. John's College, University of Manitoba
St John's College is a small Anglican college located on the University of Manitoba campus in Winnipeg, Canada. It is home to the Institute for Anglican Ministry, a ministry of the Diocese of Rupert's Land that seeks to train Anglican lay people.-History:...
(Anglican) and Manitoba College
Manitoba College
Manitoba College was a college that existed in Winnipeg, Manitoba, Canada from 1871 to 1967, when it became one of the University of Winnipeg's founding colleges. It was one of the first institutions of higher learning in the city of Winnipeg and the province of Manitoba...
(Presbyterian). The University of Manitoba granted its first degrees in 1880. The University was the first to be established in western Canada. Alan Beddoe
Alan Beddoe
Lieutenant-Commander Alan Brookman Beddoe, OC, OBE, HFHS, FHSC was a Canadian artist, war artist, consultant in heraldry and founder and first president of the Heraldry Society of Canada in 1965....
designed the university coats of arms.

The University has since added a number of colleges to its corporate and associative body. In 1882 the Manitoba Medical College, which had originally been founded by practising physicians and surgeons, became a part of the University. Charles Henry Wheeler (architect) designed the
Bacteriological Research Building (1897), part of the Manitoba Medical College. George Creeford Browne (architect) designed the Science Building, 1899-1900.


In 1901 the Legislative Assembly of Manitoba
Legislative Assembly of Manitoba
The Legislative Assembly of Manitoba and the lieutenant governor form the Legislature of Manitoba, the legislature of the Canadian province of Manitoba. Fifty-seven members are elected to this assembly in provincial general elections, all in single-member constituencies with first-past-the-post...
changed the University Act so that the university could do its own teaching, and in 1905 a building in downtown Winnipeg became its first teaching facility with a staff of six science professors. The governance was modelled on the provincial University of Toronto Act of 1906 which established a bicameral system of university government consisting of a senate (faculty), responsible for academic policy, and a board of governors (citizens) exercising exclusive control over financial policy and having formal authority in all other matters. The president, appointed by the board, was to provide a link between the 2 bodies and to perform institutional leadership.

In the early part of the 20th century, professional education expanded beyond the traditional fields of theology
Theology
Theology is the systematic and rational study of religion and its influences and of the nature of religious truths, or the learned profession acquired by completing specialized training in religious studies, usually at a university or school of divinity or seminary.-Definition:Augustine of Hippo...
, law and medicine. Graduate training based on the German-inspired American model of specialized course work and the completion of a research thesis was introduced.

The first school of architecture
Architecture
Architecture is both the process and product of planning, designing and construction. Architectural works, in the material form of buildings, are often perceived as cultural and political symbols and as works of art...
in western Canada was founded in 1919 at the University of Manitoba.

The University was originally located on Broadway. In 1929, following the addition of more programs, schools, and faculties, the University moved to its permanent site in Fort Garry, Manitoba. The University maintained the Broadway facilities for many years.
The University established an Evening institute in 1936.

St. Boniface College and St. John's College, two of the founding colleges of the University, are still part of the University of Manitoba. St. Boniface College is the University's only French language
French language
French is a Romance language spoken as a first language in France, the Romandy region in Switzerland, Wallonia and Brussels in Belgium, Monaco, the regions of Quebec and Acadia in Canada, and by various communities elsewhere. Second-language speakers of French are distributed throughout many parts...
college; it offers instruction in French and facilities for the training of teachers who expect to teach in the French language. St. John's College, which dates back to 1820, offers instruction in Arts and Science and, among other special programs, prepares men and women for the ordained ministry of the Anglican Church.

Thirty-three of the many buildings on the Fort Garry campus of the University of Manitoba are used directly for teaching. Four of these are colleges: St. John's College, St. Paul's College, St. Andrew's College, and University College. The remaining buildings contain laboratories, administrative and service offices, residences, or are the property of research agencies.

In a typical year, the university has an enrolment of approximately 27,000 students - 24,000 undergraduate and 3,000 graduate. The university offers more than 90 degrees, more than 60 at the undergraduate level. Most academic units offer graduate studies programs leading to master’s or doctoral degrees.

In 2007-08, the university acquired more than $150 million in research income. The university currently holds 48 Canada Research Chairs and is either home to or a partner in 37 research centres, institutes and shared facilities. These centres foster collaborative research and scholarship.

The University of Manitoba is the network leader of ISIS Canada (Intelligent Sensing for Innovative Structures), headquartered in the Faculty of Engineering. ISIS Canada is a National Network of Centres of Excellence (NCE) developing better ways to build, repair and monitor civil structures. The University is also an active member in 13 other NCEs.

The University of Manitoba has a total enrollment of approximately 26,000 students in 22 faculties. Most academic units offer graduate studies programs leading to master’s or doctoral degrees.

The current colleges are:

The University of Manitoba has 19 libraries and 1 archives:

The support staff is divided up into many unions. The support staff and the campus security are represented by the AESES, though the support staff at the Faculty of the Engineering are represented by CUPE
Canadian Union of Public Employees
The Canadian Union of Public Employees is a Canadian trade union serving the public sector - although it has in recent years organized workplaces in the non-profit and para-public sector as well...
Local 1482. All of the outside workers are represented by the CAW
Canadian Auto Workers
The Canadian Auto Workers is one of Canada's largest and highest profile social unions. While rooted in Ontario's large auto plants of Windsor, Brampton, Oakville, St...
Local 3007.


Notable past and present instructors

As of 2010, there have been 96 Rhodes Scholars from the University of Manitoba, more than from any other university in Western Canada.

The main art gallery on campus is "Gallery One One One".http://www.umanitoba.ca/schools/art/content/galleryoneoneone/111.html

The National Panhellenic Conference
National Panhellenic Conference
The National Panhellenic Conference , founded in 1902, is an umbrella organization for 26 national women's sororities.Each member group is autonomous as a social, Greek-letter society of college women and alumnae...
sororities on campus are Alpha Delta Pi
Alpha Delta Pi
Alpha Delta Pi is a fraternity founded on May 15, 1851 at Wesleyan College in Macon, Georgia. The Executive office for this sorority is located on Ponce de Leon Avenue in Atlanta, Georgia. Alpha Delta Pi is one of the two "Macon Magnolias," a term used to celebrate the bonds it shares with Phi Mu...
, Alpha Gamma Delta
Alpha Gamma Delta
Alpha Gamma Delta is an international women's fraternity, who are mainly sluts, founded in 1904 at Syracuse University. The Fraternity promotes academic excellence, philanthropic giving, ongoing leadership and personal development, and a spirit of loving sisterhood. Also known as "Alpha Gam" and...
, and Alpha Phi
Alpha Phi
Alpha Phi International Women's Fraternity was founded at Syracuse University on September 18, 1872. Alpha Phi currently has 152 active chapters and over 200,000 initiated members. Its celebrated Founders' Day is October 10. It was the third Greek-letter organization founded for women. In Alpha...
. The first Greek organization on campus was Zeta Psi Fraternity in 1921; other Fraternities on campus include Delta Kappa Epsilon
Delta Kappa Epsilon
Delta Kappa Epsilon is a fraternity founded at Yale College in 1844 by 15 men of the sophomore class who had not been invited to join the two existing societies...
, Delta Upsilon
Delta Upsilon
Delta Upsilon is the sixth oldest international, all-male, college Greek-letter organization, and is the oldest non-secret fraternity in North America...
and Phi Delta Theta
Phi Delta Theta
Phi Delta Theta , also known as Phi Delt, is an international fraternity founded at Miami University in 1848 and headquartered in Oxford, Ohio. Phi Delta Theta, Beta Theta Pi, and Sigma Chi form the Miami Triad. The fraternity has about 169 active chapters and colonies in over 43 U.S...
. Fraternity Rush and Sorority Recruitment occur during the first weeks of school in September.


Histories of the University