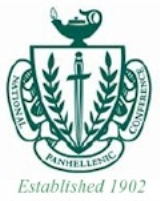 Each member group is autonomous as a social, Greek-letter
Greek alphabet
The Greek alphabet is the script that has been used to write the Greek language since at least 730 BC . The alphabet in its classical and modern form consists of 24 letters ordered in sequence from alpha to omega...
society of college women and alumnae. Members are represented on over 620 college and university campuses in the United States
United States
The United States of America is a federal constitutional republic comprising fifty states and a federal district...
and Canada
Canada
Canada is a North American country consisting of ten provinces and three territories. Located in the northern part of the continent, it extends from the Atlantic Ocean in the east to the Pacific Ocean in the west, and northward into the Arctic Ocean...
and in over 4,600 alumnae associations, making up over 4 million sorority women.

The National Panhellenic Conference's vision and mission statements were both adopted at their biennial sessions in October 2005.

The National Panhellenic Conference will be the premier advocacy and support organization for its members, member groups, college and alumnae panhellenics and a proponent of women’s fraternity membership.

The National Panhellenic Conference exists to promote the values of and to serve as an advocate for its member groups in collaboration with those members, campuses and communities.

The National Panhellenic Conference provides support and guidance for its 26 member inter/national sororities/women’s fraternities and serves as the national voice on contemporary issues of sorority life. Founded in 1902, NPC is one of the oldest and largest women’s membership organizations representing more than 4 million women at 655 college/university campuses and 4,500 local alumnae chapters in the U.S. and Canada. Each year, NPC-affiliated collegians and alumnae donate more than $5 million to worthy causes, provide $2.8 million in scholarships to women and volunteer 500,000 hours in their communities.

Early histories of women's fraternities contain accounts of "rushing and pledging agreements" or "compacts" among fraternities on various campuses, and also many stories of cooperation and mutual assistance. However, no actual Panhellenic organization existed and no uniform practices were observed.

By 1902, it was obvious that some standards were needed, so the women of Alpha Phi
Alpha Phi
Alpha Phi International Women's Fraternity was founded at Syracuse University on September 18, 1872. Alpha Phi currently has 152 active chapters and over 200,000 initiated members. Its celebrated Founders' Day is October 10. It was the third Greek-letter organization founded for women. In Alpha...
invited Pi Beta Phi
Pi Beta Phi
Pi Beta Phi is an international fraternity for women founded as I.C. Sorosis on April 28, 1867, at Monmouth College in Monmouth, Illinois. Its headquarters are located in Town and Country, Missouri, and there are 134 active chapters and over 330 alumnae organizations across the United States and...
, Kappa Alpha Theta
Kappa Alpha Theta
Kappa Alpha Theta , also known as Theta, is an international fraternity for women founded on January 27, 1870 at DePauw University, formerly Indiana Asbury...
, Kappa Kappa Gamma
Kappa Kappa Gamma
Kappa Kappa Gamma is a collegiate women's fraternity, founded at Monmouth College, in Monmouth, Illinois, USA. Although the groundwork of the organization was developed as early as 1869, the 1876 Convention voted that October 13, 1870 should be recognized at the official Founders Day, because no...
, Delta Gamma
Delta Gamma
Delta Gamma is one of the oldest and largest women's fraternities in the United States and Canada, with its Executive Offices based in Columbus, Ohio.-History:...
, Gamma Phi Beta
Gamma Phi Beta
Gamma Phi Beta is an international sorority that was founded on November 11, 1874, at Syracuse University in Syracuse, New York. The term "sorority," meaning sisterhood, was coined for Gamma Phi Beta by Dr. Frank Smalley, a professor at Syracuse University.The four founders are Helen M. Dodge,...
, Delta Delta Delta
Delta Delta Delta
Delta Delta Delta , also known as Tri Delta, is an international sorority founded on November 27, 1888, the eve of Thanksgiving Day. With over 200,000 initiates, Tri Delta is one of the world's largest NPC sororities.-History:...
, Delta Zeta
Delta Zeta
Delta Zeta is an international college sorority founded on October 24, 1902, at Miami University in Oxford, Ohio. Today, Delta Zeta has 158 collegiate chapters in the United States and over 200 alumnae chapters in the United States, the United Kingdom, and Canada...
, Alpha Chi Omega
Alpha Chi Omega
Alpha Chi Omega is a women's fraternity founded on October 15, 1885. Currently, there are 135 chapters of Alpha Chi Omega at colleges and universities across the United States and more than 200,000 lifetime members...
and Chi Omega
Chi Omega
Chi Omega is a women's fraternity and the largest member of the National Panhellenic Conference. Chi Omega has 174 active collegiate chapters and over 230 alumnae chapters. Chi Omega's national headquarters is located in Memphis, Tennessee....
to a conference in Chicago on May 24. Alpha Chi Omega and Chi Omega were unable to attend. The remaining seven groups met and the session resulted in the organization of the first interfraternity association and the first intergroup organization on college campuses. National Interfraternity Conference for men's fraternities was organized in 1909, now called the North-American Interfraternity Conference
North-American Interfraternity Conference
The North-American Interfraternity Conference , is an association of collegiate men's fraternities that was formally organized in 1910, although it began on November 27, 1909. The power of the organization rests in a House of Delegates where each member fraternity is represented by a single delegate...
.

This meeting, and the next few, resulted in several mutual agreements, especially regarding pledging. Up to this time, no guidelines had been set, and women could be pledged to groups before enrolling in college and, indeed, even belong to more than one group.

The fact that NPC is a "Conference" is significant to the NPC philosophy because the organization is a conference, not a congress
Congress
A congress is a formal meeting of the representatives of different nations, constituent states, independent organizations , or groups....
. It enacts no legislation except for the conduct of its own meetings. Other than the basic Unanimous Agreements which all groups have voted to observe, NPC confines itself to recommendations and advice, and acts as a court of final appeal in any College Panhellenic difficulty. One of its greatest services is providing Area Advisors for College Panhellenics and Alumnae Panhellenics.

The AES was a strong group of leaders that focused not only on educational (providing scholarships) and women-centric issues, but cooperated to support issues outside of the sorority world including defense projects during World War II
World War II
World War II, or the Second World War , was a global conflict lasting from 1939 to 1945, involving most of the world's nations—including all of the great powers—eventually forming two opposing military alliances: the Allies and the Axis...
. One of the projects started by the AES member groups resulted in what is today the world-renowned Leader Dogs
Guide dog
Guide dogs are assistance dogs trained to lead blind and visually impaired people around obstacles.Although the dogs can be trained to navigate various obstacles, they are partially color blind and are not capable of interpreting street signs...
for the Blind School in Rochester, Michigan
Rochester, Michigan
Rochester is an affluent city in north Oakland County in the U.S. state of Michigan on the northern outskirts of metro Detroit. The population was 12,711 at the 2010 census...
.

The National Panhellenic Conference's crest is composed of symbols that are symbolic of its members' beliefs and ideas, as well as the organization as a whole.

The shield symbolizes the organization's protective influence on its members.

Above the shield is a lamp, which represents the pursuit of leadership, scholarship, and enlightenment.

In the shield are is a laurel wreath, which denotes the victory of achieving ideals.
In the center of the shield, a sword that is piercing the wreath. This signifies willingness to fight and stand up for one's ideals, penalty of obligation, as well as bravery, achievement, and discipline.

Lastly, there is a mantle, inscribed with the words "National Panhellenic Conference" surrounding the shield. This mantle symbolizes how education, and thus knowledge, gives its members a protective cloak.