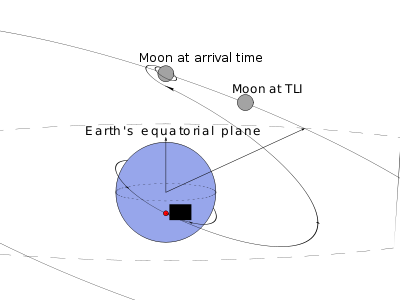 A Trans Lunar Injection (TLI) is a propulsive maneuver
Orbital maneuver
In spaceflight, an orbital maneuver is the use of propulsion systems to change the orbit of a spacecraft.For spacecraft far from Earth—for example those in orbits around the Sun—an orbital maneuver is called a deep-space maneuver .-delta-v:...
used to set a spacecraft
Spacecraft
A spacecraft or spaceship is a craft or machine designed for spaceflight. Spacecraft are used for a variety of purposes, including communications, earth observation, meteorology, navigation, planetary exploration and transportation of humans and cargo....
on a trajectory
Trajectory
A trajectory is the path that a moving object follows through space as a function of time. The object might be a projectile or a satellite, for example. It thus includes the meaning of orbit—the path of a planet, an asteroid or a comet as it travels around a central mass...
which will arrive at the Moon
Moon
The Moon is Earth's only known natural satellite,There are a number of near-Earth asteroids including 3753 Cruithne that are co-orbital with Earth: their orbits bring them close to Earth for periods of time but then alter in the long term . These are quasi-satellites and not true moons. For more...
.

Typical lunar transfer trajectories approximate Hohmann transfer
Hohmann transfer orbit
In orbital mechanics, the Hohmann transfer orbit is an elliptical orbit used to transfer between two circular orbits, typically both in the same plane....
s, although low energy transfers have also been used in some cases, as with the Hiten
Hiten
The Hiten Spacecraft , given the English name Celestial Maiden and known before launch as MUSES-A , part of the MUSES Program, was built by the Institute of Space and Astronautical Science of Japan and launched on January 24, 1990...
probe. For short duration missions without significant perturbations
Perturbation theory
Perturbation theory comprises mathematical methods that are used to find an approximate solution to a problem which cannot be solved exactly, by starting from the exact solution of a related problem...
from sources outside the Earth-Moon system, a fast Hohmann transfer is typically more practical.

A spacecraft performs TLI to begin a lunar transfer from a low circular parking orbit
Parking orbit
A parking orbit is a temporary orbit used during the launch of a satellite or other space probe. A launch vehicle boosts into the parking orbit, then coasts for a while, then fires again to enter the final desired trajectory...
around Earth
Earth
Earth is the third planet from the Sun, and the densest and fifth-largest of the eight planets in the Solar System. It is also the largest of the Solar System's four terrestrial planets...
. The large TLI burn
Orbital maneuver
In spaceflight, an orbital maneuver is the use of propulsion systems to change the orbit of a spacecraft.For spacecraft far from Earth—for example those in orbits around the Sun—an orbital maneuver is called a deep-space maneuver .-delta-v:...
, usually performed by a chemical rocket
Rocket
A rocket is a missile, spacecraft, aircraft or other vehicle which obtains thrust from a rocket engine. In all rockets, the exhaust is formed entirely from propellants carried within the rocket before use. Rocket engines work by action and reaction...
engine, increases the spacecraft's velocity, changing its orbit from a circular low Earth orbit
Low Earth orbit
A low Earth orbit is generally defined as an orbit within the locus extending from the Earth’s surface up to an altitude of 2,000 km...
to a highly eccentric orbit. As the spacecraft begins coasting on the lunar transfer arc, its trajectory approximates an elliptical orbit about the Earth with an apogee
Apsis
An apsis , plural apsides , is the point of greatest or least distance of a body from one of the foci of its elliptical orbit. In modern celestial mechanics this focus is also the center of attraction, which is usually the center of mass of the system...
near to the radius of the Moon's orbit. The TLI burn is sized and timed to precisely target the moon as it revolves around the Earth. The burn is timed so that as the spacecraft nears apogee when the Moon is near. Finally, the spacecraft enters the Moon's sphere of influence
Sphere of influence (astrodynamics)
A sphere of influence in astrodynamics and astronomy is the spherical region around a celestial body where the primary gravitational influence on an orbiting object is that body...
, making a hyperbolic lunar swingby.

TLI targeting and lunar transfers are a specific application of the n body problem
N-body problem
The n-body problem is the problem of predicting the motion of a group of celestial objects that interact with each other gravitationally. Solving this problem has been motivated by the need to understand the motion of the Sun, planets and the visible stars...
, which may be approximated in various ways. The simplest way to explore lunar transfer trajectories is by the method of patched conics
Patched Conics
In astrodynamics, the Patched Conic Approximation or Patched Two-body Approximation is a method to simplify trajectory calculations for spacecraft in a multiple body environment.-Method:...
. The spacecraft is assumed to accelerate only under classical 2 body dynamics, being dominated by the Earth until it reaches the moon's sphere of influence
Sphere of influence (astrodynamics)
A sphere of influence in astrodynamics and astronomy is the spherical region around a celestial body where the primary gravitational influence on an orbiting object is that body...
. Motion in a patched-conic system is deterministic and simple to calculate, lending itself for rough mission design and "back of the envelope" studies.

More detailed modeling can be achieved by modeling the moon's true orbital motion; including gravitation from other astronomical bodies; modeling the non-uniformity of the Earth and Moon's gravity
Gravitational field
The gravitational field is a model used in physics to explain the existence of gravity. In its original concept, gravity was a force between point masses...
; including solar radiation pressure
Solar wind
The solar wind is a stream of charged particles ejected from the upper atmosphere of the Sun. It mostly consists of electrons and protons with energies usually between 1.5 and 10 keV. The stream of particles varies in temperature and speed over time...
; and so on. Propagating spacecraft motion in such a model is numerically intensive, but necessary for true mission accuracy.

In some cases it is possible to design a TLI to target a free return trajectory
Free return trajectory
A free return trajectory is one of a very small sub-class of trajectories in which the trajectory of a satellite traveling away from a primary body is modified by the presence of a secondary body causing the satellite to return to the primary body...
, so that the spacecraft will loop around behind the moon and return to Earth without need for further propulsive maneuvers. Such free return trajectories add a margin of safety to human spaceflight
Human spaceflight
Human spaceflight is spaceflight with humans on the spacecraft. When a spacecraft is manned, it can be piloted directly, as opposed to machine or robotic space probes and remotely-controlled satellites....
missions, since the spacecraft will return to Earth "for free" after the initial TLI burn. After an inflight emergency en route to the moon, Apollo 13
Apollo 13
Apollo 13 was the seventh manned mission in the American Apollo space program and the third intended to land on the Moon. The craft was launched on April 11, 1970, at 13:13 CST. The landing was aborted after an oxygen tank exploded two days later, crippling the service module upon which the Command...
performed a course correction to put the crippled vehicle on a free return trajectory, passing behind the moon and back to Earth safely without need for further large maneuvers.

The first space probe to successfully perform TLI was the Soviet Union
Soviet Union
The Soviet Union , officially the Union of Soviet Socialist Republics , was a constitutionally socialist state that existed in Eurasia between 1922 and 1991....
's Luna 1
Luna 1
Luna 1 , first known as First Cosmic Ship, then known as Mechta was the first spacecraft to reach the vicinity of the Moon and the first of the Luna program of Soviet automatic interplanetary stations successfully launched in the direction of the Moon.While traveling through the outer Van Allen...
on January 2, 1959. The first human-crewed mission to successfully perform this procedure, and thus becoming the first humans to leave the Earth's influence, wasApollo 8
Apollo 8
Apollo 8, the second manned mission in the American Apollo space program, was the first human spaceflight to leave Earth orbit; the first to be captured by and escape from the gravitational field of another celestial body; and the first crewed voyage to return to Earth from another celestial...
on December 21, 1968.

For the Apollo lunar missions, the restartable J-2
J-2 (rocket engine)
Rocketdyne's J-2 rocket engine was a major component of the Saturn V rocket used in the Apollo program to send men to the Moon. Five J-2 engines were used on the S-II second stage, and one J-2 was used on the S-IVB third stage. The S-IVB was also used as the second stage of the smaller Saturn IB...
engine in the third (S-IVB
S-IVB
The S-IVB was built by the Douglas Aircraft Company and served as the third stage on the Saturn V and second stage on the Saturn IB. It had one J-2 engine...
) stage of the Saturn V
Saturn V
The Saturn V was an American human-rated expendable rocket used by NASA's Apollo and Skylab programs from 1967 until 1973. A multistage liquid-fueled launch vehicle, NASA launched 13 Saturn Vs from the Kennedy Space Center, Florida with no loss of crew or payload...
rocket performed TLI. This particular TLI burn
Combustion
Combustion or burning is the sequence of exothermic chemical reactions between a fuel and an oxidant accompanied by the production of heat and conversion of chemical species. The release of heat can result in the production of light in the form of either glowing or a flame...
lasted approximately 350 seconds, providing 3.05 to 3.25 km/s (10,000 to 10,600 ft/s) of delta-v
Delta-v
In astrodynamics a Δv or delta-v is a scalar which takes units of speed. It is a measure of the amount of "effort" that is needed to change from one trajectory to another by making an orbital maneuver....
, at which point the spacecraft was traveling at approximately 10.4 km/s (34150 ft/s) relative to the Earth. The Apollo 8 TLI was spectacularly observed from the Hawaiian Islands in the pre-dawn sky south of Waikiki, photographed and reported in the papers the next day. In 1969, the Apollo 10 pre-dawn TLI was visible from Cloncurry, Australia
Australia
Australia , officially the Commonwealth of Australia, is a country in the Southern Hemisphere comprising the mainland of the Australian continent, the island of Tasmania, and numerous smaller islands in the Indian and Pacific Oceans. It is the world's sixth-largest country by total area...
. It was described as resembling car headlights coming over a hill in fog, with the spacecraft appearing as a bright comet with a greenish tinge.