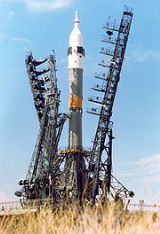 Overview
A rocket is a missile
Missile
Though a missile may be any thrown or launched object, it colloquially almost always refers to a self-propelled guided weapon system.-Etymology:The word missile comes from the Latin verb mittere, meaning "to send"...
, spacecraft
Spacecraft
A spacecraft or spaceship is a craft or machine designed for spaceflight. Spacecraft are used for a variety of purposes, including communications, earth observation, meteorology, navigation, planetary exploration and transportation of humans and cargo....
, aircraft
Aircraft
An aircraft is a vehicle that is able to fly by gaining support from the air, or, in general, the atmosphere of a planet. An aircraft counters the force of gravity by using either static lift or by using the dynamic lift of an airfoil, or in a few cases the downward thrust from jet engines.Although...
or other vehicle
Vehicle
A vehicle is a device that is designed or used to transport people or cargo. Most often vehicles are manufactured, such as bicycles, cars, motorcycles, trains, ships, boats, and aircraft....
which obtains thrust
Thrust
Thrust is a reaction force described quantitatively by Newton's second and third laws. When a system expels or accelerates mass in one direction the accelerated mass will cause a force of equal magnitude but opposite direction on that system....
from a rocket engine
Rocket engine
A rocket engine, or simply "rocket", is a jet engineRocket Propulsion Elements; 7th edition- chapter 1 that uses only propellant mass for forming its high speed propulsive jet. Rocket engines are reaction engines and obtain thrust in accordance with Newton's third law...
. In all rockets, the exhaust is formed entirely from propellant
Propellant
A propellant is a material that produces pressurized gas that:* can be directed through a nozzle, thereby producing thrust ;...
s carried within the rocket before use. Rocket engines work by action and reaction
Reaction (physics)
The third of Newton's laws of motion of classical mechanics states that forces always occur in pairs. Every action is accompanied by a reaction of equal magnitude but opposite direction. This principle is commonly known in the Latin language as actio et reactio. The attribution of which of the two...
. Rocket engines push rockets forwards simply by throwing their exhaust backwards extremely fast.

Rockets for military and recreational uses date back to at least 13th century China
China
Chinese civilization may refer to:* China for more general discussion of the country.* Chinese culture* Greater China, the transnational community of ethnic Chinese.* History of China* Sinosphere, the area historically affected by Chinese culture...
. Significant scientific, interplanetary and industrial use did not occur until the 20th century, when rocketry was the enabling technology of the Space Age
Space Age
The Space Age is a time period encompassing the activities related to the Space Race, space exploration, space technology, and the cultural developments influenced by these events. The Space Age is generally considered to have begun with Sputnik...
, including setting foot on the moon
Apollo 11
In early 1969, Bill Anders accepted a job with the National Space Council effective in August 1969 and announced his retirement as an astronaut. At that point Ken Mattingly was moved from the support crew into parallel training with Anders as backup Command Module Pilot in case Apollo 11 was...
.

Rockets are used for fireworks
Fireworks
Fireworks are a class of explosive pyrotechnic devices used for aesthetic and entertainment purposes. The most common use of a firework is as part of a fireworks display. A fireworks event is a display of the effects produced by firework devices...
, weapon
Weapon
A weapon, arm, or armament is a tool or instrument used with the aim of causing damage or harm to living beings or artificial structures or systems...
ry, ejection seats, launch vehicle
Launch vehicle
In spaceflight, a launch vehicle or carrier rocket is a rocket used to carry a payload from the Earth's surface into outer space. A launch system includes the launch vehicle, the launch pad and other infrastructure....
s for artificial satellites, human spaceflight
Human spaceflight
Human spaceflight is spaceflight with humans on the spacecraft. When a spacecraft is manned, it can be piloted directly, as opposed to machine or robotic space probes and remotely-controlled satellites....
and space exploration
Space exploration
Space exploration is the use of space technology to explore outer space. Physical exploration of space is conducted both by human spaceflights and by robotic spacecraft....
.

~ Are there any Rocket Scientists available here to answer some questions?

What term is used for the stage when rocket leaves gravitational field of earth?