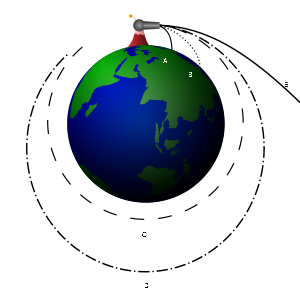 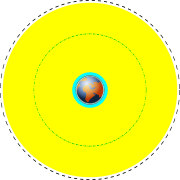 A low Earth orbit is generally defined as an orbit
Orbit
In physics, an orbit is the gravitationally curved path of an object around a point in space, for example the orbit of a planet around the center of a star system, such as the Solar System...
within the locus
Locus (mathematics)
In geometry, a locus is a collection of points which share a property. For example a circle may be defined as the locus of points in a plane at a fixed distance from a given point....
extending from the Earth’s surface up to an altitude of 2,000 km. Given the rapid orbital decay
Orbital decay
Orbital decay is the process of prolonged reduction in the altitude of a satellite's orbit.This can be due to drag produced by an atmosphere due to frequent collisions between the satellite and surrounding air molecules. The drag experienced by the object is larger in the case of increased solar...
of objects below approximately 200 km, the commonly accepted definition for LEO is between 160–2,000 km (100–1,240 miles) above the Earth's
Earth
Earth is the third planet from the Sun, and the densest and fifth-largest of the eight planets in the Solar System. It is also the largest of the Solar System's four terrestrial planets...
surface.

With the exception of the lunar flights of the Apollo program, all human spaceflight
Human spaceflight
Human spaceflight is spaceflight with humans on the spacecraft. When a spacecraft is manned, it can be piloted directly, as opposed to machine or robotic space probes and remotely-controlled satellites....
s have either been orbital in LEO or sub-orbital. The altitude record for a human spaceflight in LEO was Gemini 11
Gemini 11
Gemini 11 was the ninth manned spaceflight mission of NASA's Project Gemini, which flew from September 12 to 15, 1966. It was the 17th manned American flight and the 25th spaceflight to that time . Astronauts Charles "Pete" Conrad, Jr. and Richard F. Gordon, Jr...
with an apogee
Apsis
An apsis , plural apsides , is the point of greatest or least distance of a body from one of the foci of its elliptical orbit. In modern celestial mechanics this focus is also the center of attraction, which is usually the center of mass of the system...
of 1,374.1 km.

Objects in LEO encounter atmospheric drag in the form of gases in the thermosphere
Thermosphere
The thermosphere is the biggest of all the layers of the Earth's atmosphere directly above the mesosphere and directly below the exosphere. Within this layer, ultraviolet radiation causes ionization. The International Space Station has a stable orbit within the middle of the thermosphere, between...
(approximately 80–500 km up) or exosphere
Exosphere
The exosphere is the uppermost layer of Earth's atmosphere. In the exosphere, an upward travelling molecule moving fast enough to attain escape velocity can escape to space with a low chance of collisions; if it is moving below escape velocity it will be prevented from escaping from the celestial...
(approximately 500 km and up), depending on orbit height. LEO is an orbit around Earth between the atmosphere and below the inner Van Allen radiation belt
Van Allen radiation belt
The Van Allen radiation belt is a torus of energetic charged particles around Earth, which is held in place by Earth's magnetic field. It is believed that most of the particles that form the belts come from solar wind, and other particles by cosmic rays. It is named after its discoverer, James...
. The altitude is usually not less than 300 km because that would be impractical due to the larger atmospheric drag.

Equatorial low Earth orbits (ELEO) are a subset of LEO. These orbits, with low inclination to the Equator, allow rapid revisit times and have the lowest delta-v
Delta-v
In astrodynamics a Δv or delta-v is a scalar which takes units of speed. It is a measure of the amount of "effort" that is needed to change from one trajectory to another by making an orbital maneuver....
requirement of any orbit. Orbits with a high inclination angle are usually called polar orbit
Polar orbit
A polar orbit is an orbit in which a satellite passes above or nearly above both poles of the body being orbited on each revolution. It therefore has an inclination of 90 degrees to the equator...
s.

While a majority of artificial satellite
Satellite
In the context of spaceflight, a satellite is an object which has been placed into orbit by human endeavour. Such objects are sometimes called artificial satellites to distinguish them from natural satellites such as the Moon....
s are placed in LEO, where they travel at about 7.8 km/s, making one complete revolution around the Earth in about 90 minutes, many communication satellites require geostationary orbits, and move at the same angular velocity as the Earth. Since it requires less energy to place a satellite into a LEO and the LEO satellite needs less powerful amplifiers for successful transmission, LEO is still used for many communication applications. Because these LEO orbits are not geostationary, a network (or "constellation
Satellite constellation
A group of artificial satellites working in concert is known as a satellite constellation. Such a constellation can be considered to be a number of satellites with coordinated ground coverage, operating together under shared control, synchronised so that they overlap well in coverage and...
") of satellites is required to provide continuous coverage. Lower orbits also aid remote sensing
Remote sensing
Remote sensing is the acquisition of information about an object or phenomenon, without making physical contact with the object. In modern usage, the term generally refers to the use of aerial sensor technologies to detect and classify objects on Earth by means of propagated signals Remote sensing...
satellites because of the added detail that can be gained. Remote sensing satellites can also take advantage of sun-synchronous LEO orbits
Sun-synchronous orbit
A Sun-synchronous orbit is a geocentric orbit which combines altitude and inclination in such a way that an object on that orbit ascends or descends over any given point of the Earth's surface at the same local mean solar time. The surface illumination angle will be nearly the same every time...
at an altitude of about 800 km (497.1 mi) and near polar inclination. ENVISAT
Envisat
Envisat is an Earth-observing satellite. It was launched on 1 March 2002 aboard an Ariane 5 from the Guyana Space Centre in Kourou, French Guyana into a Sun synchronous polar orbit at an altitude of...
is one example of an Earth observation satellite that makes use of this particular type of LEO.

Atmospheric and gravity drag
Gravity drag
In astrodynamics and rocketry, gravity drag is a measure of the loss in the net performance of a rocket while it is thrusting in a gravitational field...
associated with launch typically adds 1.5–2.0 km/s to the delta-v
Delta-v
In astrodynamics a Δv or delta-v is a scalar which takes units of speed. It is a measure of the amount of "effort" that is needed to change from one trajectory to another by making an orbital maneuver....
launch vehicle required to reach normal LEO orbital velocity of around 7.8 km/s.

The LEO environment is becoming congested with space debris
Space debris
Space debris, also known as orbital debris, space junk, and space waste, is the collection of objects in orbit around Earth that were created by humans but no longer serve any useful purpose. These objects consist of everything from spent rocket stages and defunct satellites to erosion, explosion...
. This has caused growing concern in recent years, since collisions at orbital velocities can be damaging or dangerous, and can produce more space debris in the process (Kessler Syndrome
Kessler Syndrome
The Kessler syndrome , proposed by NASA scientist Donald J...
). The Joint Space Operations Center
Joint Space Operations Center
Joint Space Operations Center is a command and control weapon system focused on planning and executing US Strategic Command's Joint Functional Component Command for Space mission...
, part of United States Strategic Command
United States Strategic Command
United States Strategic Command is one of nine Unified Combatant Commands of the United States Department of Defense . The Command, including components, employs more than 2,700 people, representing all four services, including DoD civilians and contractors, who oversee the command's operationally...
(formerly the United States Space Command), currently tracks more than 8,500 objects larger than 10 cm in LEO, however a limited Arecibo Observatory
Arecibo Observatory
The Arecibo Observatory is a radio telescope near the city of Arecibo in Puerto Rico. It is operated by SRI International under cooperative agreement with the National Science Foundation...
study suggested there could be approximately one million objects larger than 2 millimeters, which are too small to be visible from Earth.