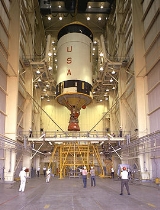 Encyclopedia
The S-IVB was built by the Douglas Aircraft Company
Douglas Aircraft Company
The Douglas Aircraft Company was an American aerospace manufacturer, based in Long Beach, California. It was founded in 1921 by Donald Wills Douglas, Sr. and later merged with McDonnell Aircraft in 1967 to form McDonnell Douglas...
and served as the third stage on the Saturn V
Saturn V
The Saturn V was an American human-rated expendable rocket used by NASA's Apollo and Skylab programs from 1967 until 1973. A multistage liquid-fueled launch vehicle, NASA launched 13 Saturn Vs from the Kennedy Space Center, Florida with no loss of crew or payload...
and second stage on the Saturn IB
Saturn IB
The Saturn IB was an American launch vehicle commissioned by the National Aeronautics and Space Administration for use in the Apollo program...
. It had one J-2
J-2 (rocket engine)
Rocketdyne's J-2 rocket engine was a major component of the Saturn V rocket used in the Apollo program to send men to the Moon. Five J-2 engines were used on the S-II second stage, and one J-2 was used on the S-IVB third stage. The S-IVB was also used as the second stage of the smaller Saturn IB...
engine. For lunar missions it was fired twice: first for the orbit insertion after second stage cutoff, and then for translunar injection (TLI).

The S-IVB evolved from the upper stage of the Saturn I
Saturn I
The Saturn I was the United States' first heavy-lift dedicated space launcher, a rocket designed specifically to launch large payloads into low Earth orbit. Most of the rocket's power came from a clustered lower stage consisting of tanks taken from older rocket designs and strapped together to make...
rocket, the S-IV, and was the first stage of the Saturn V to be designed. The S-IV used a cluster of six engines but used the same fuels as the S-IVB — liquid hydrogen
Hydrogen
Hydrogen is the chemical element with atomic number 1. It is represented by the symbol H. With an average atomic weight of , hydrogen is the lightest and most abundant chemical element, constituting roughly 75% of the Universe's chemical elemental mass. Stars in the main sequence are mainly...
and liquid oxygen
Oxygen
Oxygen is the element with atomic number 8 and represented by the symbol O. Its name derives from the Greek roots ὀξύς and -γενής , because at the time of naming, it was mistakenly thought that all acids required oxygen in their composition...
. It was also originally meant to be the fourth stage of a planned rocket called the C-4
Saturn C-4
The Saturn C-4 was a conceptual American launch vehicle, originally proposed in 1960 to be used in a Lunar orbit rendezvous lunar landing.It would have consisted of three stages; an S-IB-4 first stage, a S-II-4 second stage and a S-IVB third stage...
, hence the name S-IV.

Eleven companies submitted proposals for being the lead contractor on the stage by the deadline of 29 February 1960. NASA administrator T. Keith Glennan
T. Keith Glennan
Thomas Keith Glennan was the first Administrator of the National Aeronautics and Space Administration, serving from August 19, 1958 to January 20, 1961.-Early career:...
decided on 19 April that Douglas Aircraft Company would be awarded the contract. Convair
Convair
Convair was an American aircraft manufacturing company which later expanded into rockets and spacecraft. The company was formed in 1943 by the merger of Vultee Aircraft and Consolidated Aircraft, and went on to produce a number of pioneering aircraft, such as the Convair B-36 bomber, and the F-102...
had come a close second but Glennan did not want to monopolize the liquid hydrogen fueled rocket market as Convair was already building the Centaur rocket stage
Centaur (rocket stage)
Centaur is a rocket stage designed for use as the upper stage of space launch vehicles. Centaur boosts its satellite payload to geosynchronous orbit or, in the case of an interplanetary space probe, to or near to escape velocity...
.

In the end the Marshall Space Flight Center
Marshall Space Flight Center
The George C. Marshall Space Flight Center is the U.S. government's civilian rocketry and spacecraft propulsion research center. The largest center of NASA, MSFC's first mission was developing the Saturn launch vehicles for the Apollo moon program...
decided to use the C-5 rocket (later called the Saturn V), which had three stages and would be topped with an uprated S-IV called the S-IVB which instead of using a cluster of engines would have a single J-2 engine. Douglas was awarded the contract for the S-IVB because of the similarities between it and the S-IV. At the same time it was decided to create the C-IB rocket (Saturn IB) that would also use the S-IVB as its second stage and could be used for testing the Apollo spacecraft in Earth orbit.

Douglas built two distinct versions of the S-IVB, the 200 series and the 500 series. The 200 series was used by the Saturn IB and differed from the 500 in the fact that it did not have a flared interstage and had less helium pressurization on board as it would not be restarted. (On the 500 series, the interstage needed to flare out to match the larger diameter of the lower stages of the Saturn V.) The 200 series also had three solid rockets for separating the S-IVB stage from the S-IB stage during launch, rather than the two on the 500 series, and lacked the linear APS thrusters that the 500 series required for ullage
Ullage motor
Ullage motors are relatively small, independently-fueled rocket engines that may be fired to accelerate the rocket prior to main engine ignition, when the vehicle is in a zero-g situation....
operations prior to restarting the J2 engine.

During Apollo 13
Apollo 13
Apollo 13 was the seventh manned mission in the American Apollo space program and the third intended to land on the Moon. The craft was launched on April 11, 1970, at 13:13 CST. The landing was aborted after an oxygen tank exploded two days later, crippling the service module upon which the Command...
, Apollo 14
Apollo 14
Apollo 14 was the eighth manned mission in the American Apollo program, and the third to land on the Moon. It was the last of the "H missions", targeted landings with two-day stays on the Moon with two lunar EVAs, or moonwalks....
, Apollo 15
Apollo 15
Apollo 15 was the ninth manned mission in the American Apollo space program, the fourth to land on the Moon and the eighth successful manned mission. It was the first of what were termed "J missions", long duration stays on the Moon with a greater focus on science than had been possible on previous...
, Apollo 16
Apollo 16
Young and Duke served as the backup crew for Apollo 13; Mattingly was slated to be the Apollo 13 command module pilot until being pulled from the mission due to his exposure to rubella through Duke.-Backup crew:...
and Apollo 17
Apollo 17
Apollo 17 was the eleventh and final manned mission in the American Apollo space program. Launched at 12:33 a.m. EST on December 7, 1972, with a three-member crew consisting of Commander Eugene Cernan, Command Module Pilot Ronald Evans, and Lunar Module Pilot Harrison Schmitt, Apollo 17 remains the...
, the S-IVB stages were crashed into the Moon
Moon
The Moon is Earth's only known natural satellite,There are a number of near-Earth asteroids including 3753 Cruithne that are co-orbital with Earth: their orbits bring them close to Earth for periods of time but then alter in the long term . These are quasi-satellites and not true moons. For more...
to perform seismic measurements used for characterizing the lunar interior.

The proposed Earth Departure Stage (EDS) and the second stage of the Ares I
Ares I
Ares I was the crew launch vehicle that was being developed by NASA as part of the Constellation Program. The name "Ares" refers to the Greek deity Ares, who is identified with the Roman god Mars...
rocket will bear some of the characteristics of the S-IVB stage, as both will have an uprated J-2 engine (J-2X series), with the former performing the same functions as that of the Series 500 version of the stage (placing the payload into orbit, and later firing the spacecraft into trans-lunar space). 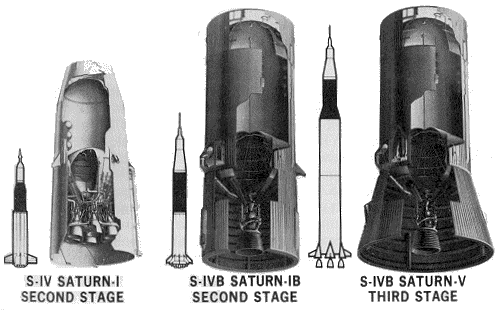 Three versions of the SIV/SIVB

(* See List of artificial objects on the Moon for location.)