Encyclopedia
A parking orbit is a temporary orbit used during the launch of a satellite
Satellite
In the context of spaceflight, a satellite is an object which has been placed into orbit by human endeavour. Such objects are sometimes called artificial satellites to distinguish them from natural satellites such as the Moon....
or other space probe
Space probe
A robotic spacecraft is a spacecraft with no humans on board, that is usually under telerobotic control. A robotic spacecraft designed to make scientific research measurements is often called a space probe. Many space missions are more suited to telerobotic rather than crewed operation, due to...
. A launch vehicle boosts into the parking orbit, then coasts for a while, then fires again to enter the final desired trajectory. The alternative to a parking orbit is direct injection, where the rocket fires continuously (except during staging) until its fuel is exhausted, ending with the payload on the final trajectory. 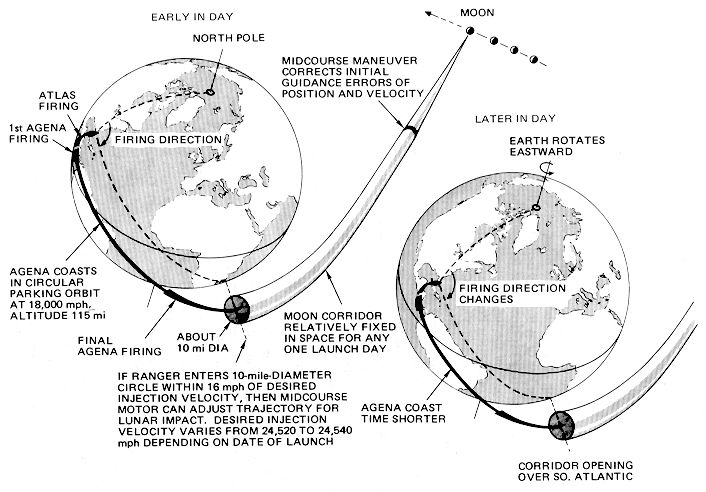 There are several reasons why a parking orbit may be used:


The figure shows the first two reasons. For this lunar mission, the desired location for the final firing is originally over southern Africa. As the day progresses, this point stays essentially fixed while the Earth moves underneath, and this is compensated for by changing the launch angle.

The most notable disadvantage is that a rocket needs to coast for a while, then restart while under zero g
Weightlessness
Weightlessness is the condition that exists for an object or person when they experience little or no acceleration except the acceleration that defines their inertial trajectory, or the trajectory of pure free-fall...
conditions. Furthermore the length of two of the burns (the initial injection burn, and the final burn) typically depend on where in the launch window the launch occurs. To do this without wasting fuel, a rocket stage that can fire, then stop, then start again is needed. This implies a liquid fuel engine since solid fuel rockets cannot be stopped or restarted - once ignited they burn to completion. But even in a liquid fueled engine, this multiple restart capability is non-trivial for a number of reasons:

The Centaur
Centaur (rocket stage)
Centaur is a rocket stage designed for use as the upper stage of space launch vehicles. Centaur boosts its satellite payload to geosynchronous orbit or, in the case of an interplanetary space probe, to or near to escape velocity...
and Agena families of upper stages were designed for such restarts and have often been used in this manner. (The last Agena flew in 1987 but Centaur is still in production.)