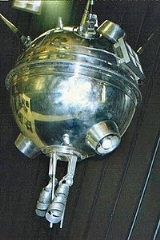 Overview
Luna
Luna programme
The Luna programme , occasionally called Lunik or Lunnik, was a series of robotic spacecraft missions sent to the Moon by the Soviet Union between 1959 and 1976. Fifteen were successful, each designed as either an orbiter or lander, and accomplished many firsts in space exploration...
1 (E-1 series), first known as First Cosmic Ship, then known as Mechta ' onMouseout='HidePop("66904")' href="/topics/Literal_translation">lit.
Literal translation
Literal translation, or direct translation, is the rendering of text from one language to another "word-for-word" rather than conveying the sense of the original...
: Dream) was the first spacecraft
Spacecraft
A spacecraft or spaceship is a craft or machine designed for spaceflight. Spacecraft are used for a variety of purposes, including communications, earth observation, meteorology, navigation, planetary exploration and transportation of humans and cargo....
to reach the vicinity of the Moon
Moon
The Moon is Earth's only known natural satellite,There are a number of near-Earth asteroids including 3753 Cruithne that are co-orbital with Earth: their orbits bring them close to Earth for periods of time but then alter in the long term . These are quasi-satellites and not true moons. For more...
and the first of the Luna program of Soviet automatic interplanetary stations successfully launched in the direction of the Moon.

While traveling through the outer Van Allen radiation belt
Van Allen radiation belt
The Van Allen radiation belt is a torus of energetic charged particles around Earth, which is held in place by Earth's magnetic field. It is believed that most of the particles that form the belts come from solar wind, and other particles by cosmic rays. It is named after its discoverer, James...
, the spacecraft's scintillator
Scintillator
A scintillator is a special material, which exhibits scintillation—the property of luminescence when excited by ionizing radiation. Luminescent materials, when struck by an incoming particle, absorb its energy and scintillate, i.e., reemit the absorbed energy in the form of light...
made observations indicating that a small number of high energy
Energy
In physics, energy is an indirectly observed quantity. It is often understood as the ability a physical system has to do work on other physical systems...
particle
Subatomic particle
In physics or chemistry, subatomic particles are the smaller particles composing nucleons and atoms. There are two types of subatomic particles: elementary particles, which are not made of other particles, and composite particles...
s exist in the outer belt.

What was the name of the program it was part of?
More
x