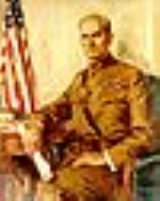 Tasker Howard Bliss was born on 31 December 1853 in Lewisburg, Pennsylvania to George Ripley Bliss
George Ripley Bliss
Reverend George Ripley Bliss was president of Bucknell University from 1857–58 and 1871–72.His initial training was for the Baptist ministry. He taught Greek , Latin, and biblical exegisis at Bucknell and at Crozer theological seminary.One of his 13 children, General Tasker Howard Bliss, became...
and Mary Ann (née Raymond) Bliss. He attended Bucknell (then Lewisburg) University for one year before entering the United States Military Academy
United States Military Academy
The United States Military Academy at West Point is a four-year coeducational federal service academy located at West Point, New York. The academy sits on scenic high ground overlooking the Hudson River, north of New York City...
(USMA) at West Point, New York. At the USMA, he excelled in languages, mathematics and tactics and graduated eighth in his class on 16 June 1875.

Upon graduation he was commissioned a 2nd Lieutenant in the 1st Artillery and performed routine garrison duties in Georgia and New York. On 14 September 1876 he was appointed to the USMA as an Assistant Professor of French until 1882. While assigned to the USMA, he was promoted to 1st Lieutenant.

Bliss married Eleanor (or Eleanora) E. Anderson on 24 May 1882. In late 1882 he was assigned to Fort Mason, California and Fort Monroe, Virginia. Their first child, Eleanor F. was born in January 1884. In 1885 he was an instructor at the Naval War College
Naval War College
The Naval War College is an education and research institution of the United States Navy that specializes in developing ideas for naval warfare and passing them along to officers of the Navy. The college is located on the grounds of Naval Station Newport in Newport, Rhode Island...
where he was sent to England, Germany and France to study their military schools. The purpose of the trip was to determine if United States military schools were teaching similar and relevant material. He returned to the United States and on 16 May 1888 he was assigned to be Aide-de-Camp
Aide-de-camp
An aide-de-camp is a personal assistant, secretary, or adjutant to a person of high rank, usually a senior military officer or a head of state...
to U.S. Army Commanding General John M. Schofield. A concurrent assignment while Aide-de-Camp was Inspector of Artillery and Small Arms. During this time period, the Blisses' son Edward Goring was born in June 1892.

On 20 December 1892, while Aide-de-Camp, he was promoted to Captain, Staff, Commissary of Subsistence and on 26 September 1895 he was assigned to special duty at the Office of the Secretary of War. On 4 March 1897 he was assigned as the Quartermaster and Commissary at Fort Monroe, Virginia. On 2 July 1897 he was sent to Spain as the Military Attaché
Military attaché
A military attaché is a military expert who is attached to a diplomatic mission . This post is normally filled by a high-ranking military officer who retains the commission while serving in an embassy...
to the United States Legation. When war was declared between Spain and the United States, Captain Bliss was ordered to return to the U.S., via Paris, France, on 21 April 1898.

Lieutenant Colonel Bliss was commissioned as a Brigadier General in the Regular Army by an Act of Congress
Act of Congress
An Act of Congress is a statute enacted by government with a legislature named "Congress," such as the United States Congress or the Congress of the Philippines....
under direction of the U.S. President Theodore Roosevelt
Theodore Roosevelt
Theodore "Teddy" Roosevelt was the 26th President of the United States . He is noted for his exuberant personality, range of interests and achievements, and his leadership of the Progressive Movement, as well as his "cowboy" persona and robust masculinity...
. On 15 August 1903 Brigadier General
Brigadier general (United States)
A brigadier general in the United States Army, Air Force, and Marine Corps, is a one-star general officer, with the pay grade of O-7. Brigadier general ranks above a colonel and below major general. Brigadier general is equivalent to the rank of rear admiral in the other uniformed...
(BG) Bliss was appointed a member of the General Staff, Chief, 3rd Division and President of the Army War College. In September 1904 he participated in the Manassas Maneuvers in Virginia.

On 7 June 1905 BG Bliss was ordered the Philippine Islands to Command the Department of Luzon
Luzon
Luzon is the largest island in the Philippines. It is located in the northernmost region of the archipelago, and is also the name for one of the three primary island groups in the country centered on the Island of Luzon...
. On 9 January 1906 he was assigned as Commander of the Department of Mindanao
Mindanao
Mindanao is the second largest and easternmost island in the Philippines. It is also the name of one of the three island groups in the country, which consists of the island of Mindanao and smaller surrounding islands. The other two are Luzon and the Visayas. The island of Mindanao is called The...
and appointed Governor of the Moro Province. While still Governor of the Moro Province
Moro Province
Moro Province is the name of the province of the Philippines consisting of the current provinces/regions of Zamboanga, Lanao, Cotabato, Davao, and Sulu...
, BG Bliss was ordered to command the Philippine Division on 14 December 1908. He relinquished all Philippine Islands commands on 6 April 1909, and returned to the U.S. after touring China and Manchuria.

BG Bliss was assigned to the General Staff and President of the U.S. Army War College
U.S. Army War College
The United States Army War College is a United States Army school located in Carlisle, Pennsylvania, on the 500 acre campus of the historic Carlisle Barracks...
, 19 June 1909. On 12 August 1910 he was assigned to Command the Department of California, in San Francisco, California
San Francisco, California
San Francisco , officially the City and County of San Francisco, is the financial, cultural, and transportation center of the San Francisco Bay Area, a region of 7.15 million people which includes San Jose and Oakland...
. On 13 August 1911 he was assigned as Commander, Department of the East, Fort Totten, New York and subsequently assigned to Commander, Department of the South, Fort Sam Houston
Fort Sam Houston
Fort Sam Houston is a U.S. Army post in San Antonio, Texas.Known colloquially as "Fort Sam," it is named for the first President of the Republic of Texas, Sam Houston....
, San Antonio, Texas on 26 February 1913.

On 13 February 1915 BG Bliss was detailed to the General Staff as Assistant Chief of Staff, Army until his promotion to Chief of Staff on 22 September 1917. He was promoted to Major General
Major general (United States)
In the United States Army, United States Marine Corps, and United States Air Force, major general is a two-star general-officer rank, with the pay grade of O-8. Major general ranks above brigadier general and below lieutenant general...
(MG), U. S. Army on 20 November 1915 and to full General on 6 October 1917. On 17 November 1917 he was assigned as the American Permanent Military Representative, Supreme War Council
Supreme War Council
The Supreme War Council was a central command created by British Prime Minister David Lloyd George to coordinate Allied military strategy during World War I. It was founded in 1917, and was based in Versailles...
, concurrent with the U.S. Army Chief of Staff position.
General Bliss was forced to retire due to age limitations, 31 December 1917 but by order of U.S. President Woodrow Wilson
Woodrow Wilson
Thomas Woodrow Wilson was the 28th President of the United States, from 1913 to 1921. A leader of the Progressive Movement, he served as President of Princeton University from 1902 to 1910, and then as the Governor of New Jersey from 1911 to 1913...
, was recalled to active duty on 1 January 1918 and sent to Versailles, France, 23 January, to better carry out his duties on the Supreme War Council. He was relieved as U.S. Army Chief of Staff, 19 May 1918 and returned to the grade of Brevet General
General (United States)
In the United States Army, United States Air Force, and United States Marine Corps, general is a four-star general officer rank, with the pay grade of O-10. General ranks above lieutenant general and below General of the Army or General of the Air Force; the Marine Corps does not have an...
on 20 May 1918. After the signing of the Armistice ending World War I, on 11 November 1918, General Bliss held two titles, the American Permanent Military Representative, Supreme War Council, and also, Plenipotentiary at the Paris Peace Conference
Paris Peace Conference, 1919
The Paris Peace Conference was the meeting of the Allied victors following the end of World War I to set the peace terms for the defeated Central Powers following the armistices of 1918. It took place in Paris in 1919 and involved diplomats from more than 32 countries and nationalities...
. This assignment was concluded on 10 December 1919.

On 1 May 1920 Bliss was assigned as Governor of the U.S. Soldiers Home
Armed Forces Retirement Home
The Armed Forces Retirement Home , formerly the U.S. Soldiers' and Airmen's Home, the U.S. Soldiers' Home, and the U.S. Military Asylum, is an independent establishment in the executive branch of the federal government of the United States...
, Washington, D.C.
Washington, D.C.
Washington, D.C., formally the District of Columbia and commonly referred to as Washington, "the District", or simply D.C., is the capital of the United States. On July 16, 1790, the United States Congress approved the creation of a permanent national capital as permitted by the U.S. Constitution....
He retired from active duty on 1 May 1927. He was reinstated as a full general, retired, on 21 June 1930 and died on 9 November 1930. He is buried in Arlington National Cemetery
Arlington National Cemetery
Arlington National Cemetery in Arlington County, Virginia, is a military cemetery in the United States of America, established during the American Civil War on the grounds of Arlington House, formerly the estate of the family of Confederate general Robert E. Lee's wife Mary Anna Lee, a great...
, Washington, D.C.

Bliss was never commissioned as a colonel. He was promoted to brigadier general from lieutenant colonel by an act of Congress at the President's request.

Bliss was also never commissioned as a lieutenant general. He was appointed a general by the U.S. President under U.S. Code, Title 10, Subtitle A, Part I, Chapter 6, § 164.

Edward Goring Bliss was the son of Tasker and Eleanor E. Bliss. Born on 2 June 1892 he graduated from the USMA in 1916 and was commissioned a 2nd Lieutenant in the Engineer Corps. He saw service in Siberia in 1918-1919
Siberian Intervention
The ', or the Siberian Expedition, of 1918–1922 was the dispatch of troops of the Entente powers to the Russian Maritime Provinces as part of a larger effort by the western powers and Japan to support White Russian forces against the Bolshevik Red Army during the Russian Civil War...
and through World War II
World War II
World War II, or the Second World War , was a global conflict lasting from 1939 to 1945, involving most of the world's nations—including all of the great powers—eventually forming two opposing military alliances: the Allies and the Axis...
. He retired with the rank of lieutenant colonel. Eleanor F. Bliss was Tasker H. and Eleanor E. Bliss’ daughter, born in 1885, who attended Bryn Mawr Girls School and later married Adolph Knoff.