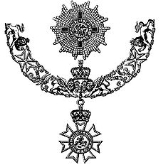 It is named in honour of two military saints, St. Michael
Michael (archangel)
Michael , Micha'el or Mîkhā'ēl; , Mikhaḗl; or Míchaël; , Mīkhā'īl) is an archangel in Jewish, Christian, and Islamic teachings. Roman Catholics, Anglicans, and Lutherans refer to him as Saint Michael the Archangel and also simply as Saint Michael...
and St. George
Saint George
Saint George was, according to tradition, a Roman soldier from Syria Palaestina and a priest in the Guard of Diocletian, who is venerated as a Christian martyr. In hagiography Saint George is one of the most venerated saints in the Catholic , Anglican, Eastern Orthodox, and the Oriental Orthodox...
.

The Order of St Michael and St George is awarded to men and women who render extraordinary or important non-military service in a foreign country.

My great uncle George Trevor-Roper Cook was a CMG, he also held the DSO and was killed in action during WW1 in 1918. However he does not appear in the...
More
x