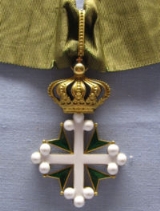 Encyclopedia
The Order of Saints Maurice and Lazarus is an order of chivalry awarded by the House of Savoy
House of Savoy
The House of Savoy was formed in the early 11th century in the historical Savoy region. Through gradual expansion, it grew from ruling a small county in that region to eventually rule the Kingdom of Italy from 1861 until the end of World War II, king of Croatia and King of Armenia...
, the heads of which were formerly Kings of Italy
King of Italy
King of Italy is a title adopted by many rulers of the Italian peninsula after the fall of the Roman Empire...
. The order was formed by a union of the original Order of St Lazarus and the Order of Saint Maurice in 1572 and has around 2,000 members.


History of the order

The Order of Saint Lazarus was established as a military and religious community at the time of the Latin Kingdom of Jerusalem
Kingdom of Jerusalem
The Kingdom of Jerusalem was a Catholic kingdom established in the Levant in 1099 after the First Crusade. The kingdom lasted nearly two hundred years, from 1099 until 1291 when the last remaining possession, Acre, was destroyed by the Mamluks, but its history is divided into two distinct periods....
, probably some years before 1090. Presuming a foundation date of 1099 for the Order of the Hospital (now the Sovereign Military Order of Malta), the Order of Saint Lazarus is arguably the oldest surviving of the medieval military-religious knightly orders. From its inception, the order was concerned with the relief of leprosy
Leprosy
Leprosy or Hansen's disease is a chronic disease caused by the bacteria Mycobacterium leprae and Mycobacterium lepromatosis. Named after physician Gerhard Armauer Hansen, leprosy is primarily a granulomatous disease of the peripheral nerves and mucosa of the upper respiratory tract; skin lesions...
, and many of its members were lepers who had been knight
Knight
A knight was a member of a class of lower nobility in the High Middle Ages.By the Late Middle Ages, the rank had become associated with the ideals of chivalry, a code of conduct for the perfect courtly Christian warrior....
s in other orders. It became very rich, its practices dubious, and its funds much abused. With the fall of Acre
Siege of Acre (1291)
The Siege of Acre took place in 1291 and resulted in the loss of the Crusader-controlled city of Acre to the Muslims. It is considered one of the most important battles of the time period. Although the crusading movement continued for several more centuries, the capture of the city marked the end...
in 1291 the knights of St Lazarus fled the Holy Land
Holy Land
The Holy Land is a term which in Judaism refers to the Kingdom of Israel as defined in the Tanakh. For Jews, the Land's identifiction of being Holy is defined in Judaism by its differentiation from other lands by virtue of the practice of Judaism often possible only in the Land of Israel...
and Egypt
Egypt
Egypt , officially the Arab Republic of Egypt, Arabic: , is a country mainly in North Africa, with the Sinai Peninsula forming a land bridge in Southwest Asia. Egypt is thus a transcontinental country, and a major power in Africa, the Mediterranean Basin, the Middle East and the Muslim world...
and settled in France
France
The French Republic , The French Republic , The French Republic , (commonly known as France , is a unitary semi-presidential republic in Western Europe with several overseas territories and islands located on other continents and in the Indian, Pacific, and Atlantic oceans. Metropolitan France...
and, in 1311, in Naples
Naples
Naples is a city in Southern Italy, situated on the country's west coast by the Gulf of Naples. Lying between two notable volcanic regions, Mount Vesuvius and the Phlegraean Fields, it is the capital of the region of Campania and of the province of Naples...
. In the sixteenth century, the order declined in credibility and wealth. With papal support, Duke of Savoy became Grand Master in 1572.

The Order of St Maurice was founded in 1434 by Amadeus VIII, Duke of Savoy, who became Antipope Felix V. The order declined, but in 1572 was reestablished by Pope Pius V
Pope Pius V
Pope Saint Pius V , born Antonio Ghislieri , was Pope from 1566 to 1572 and is a saint of the Catholic Church. He is chiefly notable for his role in the Council of Trent, the Counter-Reformation, and the standardization of the Roman liturgy within the Latin Church...
at the instigation on the then Duke of Savoy.

Before its transfer to the House of Savoy, the Order of Saint Lazarus maintained a number of leper hospitals, prominent among these an institution in the Italian city of Capua. French knights were reluctant to accept the Savoy grand mastership with effect in their country and the French kings maintained protectorate over Order of Saint Lazarus
Order of Saint Lazarus
This article concerns the order of knighthood named after Saint Lazarus. For other uses of the name Lazarus, see Lazarus .The Military and Hospitaller Order of Saint Lazarus of Jerusalem is an order of chivalry which originated in a leper hospital founded by the Knights Hospitaller in 1098 by the...
.
In 1572 Pope Gregory XIII
Pope Gregory XIII
Pope Gregory XIII , born Ugo Boncompagni, was Pope from 1572 to 1585. He is best known for commissioning and being the namesake for the Gregorian calendar, which remains the internationally-accepted civil calendar to this date.-Youth:He was born the son of Cristoforo Boncompagni and wife Angela...
merged the Italian foundation of the Order of Saint Lazarus with the Order of St Maurice. The new order was charged to defend the Holy See
Holy See
The Holy See is the episcopal jurisdiction of the Catholic Church in Rome, in which its Bishop is commonly known as the Pope. It is the preeminent episcopal see of the Catholic Church, forming the central government of the Church. As such, diplomatically, and in other spheres the Holy See acts and...
as well as continue to assist lepers. The war galleys of the order fought against the Turks
Ottoman Empire
The Ottoman EmpireIt was usually referred to as the "Ottoman Empire", the "Turkish Empire", the "Ottoman Caliphate" or more commonly "Turkey" by its contemporaries...
and the Barbary pirates. When leprosy again broke out the order founded, in 1773, a hospital in Aosta
Aosta
Aosta is the principal city of the bilingual Aosta Valley in the Italian Alps, north-northwest of Turin. It is situated near the Italian entrance of the Mont Blanc Tunnel, at the confluence of the Buthier and the Dora Baltea, and at the junction of the Great and Little St. Bernard routes...
. 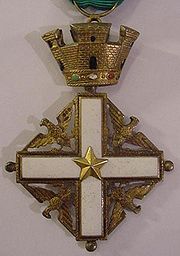 The Order currently has six classes for gentlemen:


as well as three classes for ladies:

The formerly related Maurizian Medal for Military Merit of fifty years, established in 1839, was one of the few medals not suppressed by the Republic, becoming the Maurizian Medal of Merit for fifty years military career in 1954.

See also :Category:Recipients of the Order of Saints Maurice and Lazarus