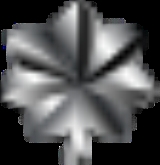 The pay grade for the rank of Lieutenant Colonel is O-5. The insignia for the rank consists of a silver oak leaf, with slight stylized differences between the Army/Air Force version and the Navy/Marine Corps version.
The rank of lieutenant colonel was first created during the Revolutionary War
American Revolutionary War
The American Revolutionary War , the American War of Independence, or simply the Revolutionary War, began as a war between the Kingdom of Great Britain and thirteen British colonies in North America, and ended in a global war between several European great powers.The war was the result of the...
, when the position was held by aides to Regiment Colonel
Colonel
Colonel , abbreviated Col or COL, is a military rank of a senior commissioned officer. It or a corresponding rank exists in most armies and in many air forces; the naval equivalent rank is generally "Captain". It is also used in some police forces and other paramilitary rank structures...
s, and was sometimes known as "lieutenant to the colonel." The rank of lieutenant colonel
Lieutenant-Colonel (UK)
Lieutenant colonel is a rank in the British Army and Royal Marines which is also used in many Commonwealth countries. The rank is superior to major, and subordinate to colonel...
had existed in the British Army
British Army
The British Army is the land warfare branch of Her Majesty's Armed Forces in the United Kingdom. It came into being with the unification of the Kingdom of England and Scotland into the Kingdom of Great Britain in 1707. The new British Army incorporated Regiments that had already existed in England...
since at least the 16th century.

During the 19th century, lieutenant colonel was often a terminal rank for many officers, since the rank of "full colonel" was considered extremely prestigious reserved only for the most successful officers.

My research indicates that there are subtle dedsign differences between the army/airforce oak leaf insignia (pin) for LT Col and the USMC one. What e...
More
x