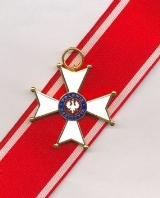 Encyclopedia
The Order of Polonia Restituta is one of Poland
Poland
Poland , officially the Republic of Poland , is a country in Central Europe bordered by Germany to the west; the Czech Republic and Slovakia to the south; Ukraine, Belarus and Lithuania to the east; and the Baltic Sea and Kaliningrad Oblast, a Russian exclave, to the north...
's highest Orders
Order (decoration)
An order or order of merit is a visible honour, awarded by a government, dynastic house or international organization to an individual, usually in recognition of distinguished service to a nation or to humanity. The distinction between orders and decorations is somewhat vague, except that most...
. The Order can be conferred for outstanding achievements in the fields of education
Education
Education in its broadest, general sense is the means through which the aims and habits of a group of people lives on from one generation to the next. Generally, it occurs through any experience that has a formative effect on the way one thinks, feels, or acts...
, science
Science
Science is a systematic enterprise that builds and organizes knowledge in the form of testable explanations and predictions about the universe...
, sport
Sport
A Sport is all forms of physical activity which, through casual or organised participation, aim to use, maintain or improve physical fitness and provide entertainment to participants. Sport may be competitive, where a winner or winners can be identified by objective means, and may require a degree...
, culture
Culture
Culture is a term that has many different inter-related meanings. For example, in 1952, Alfred Kroeber and Clyde Kluckhohn compiled a list of 164 definitions of "culture" in Culture: A Critical Review of Concepts and Definitions...
, art
Art
Art is the product or process of deliberately arranging items in a way that influences and affects one or more of the senses, emotions, and intellect....
, economics
Economics
Economics is the social science that analyzes the production, distribution, and consumption of goods and services. The term economics comes from the Ancient Greek from + , hence "rules of the house"...
, defense of the country, social work
Social work
Social Work is a professional and academic discipline that seeks to improve the quality of life and wellbeing of an individual, group, or community by intervening through research, policy, community organizing, direct practice, and teaching on behalf of those afflicted with poverty or any real or...
, civil service
Civil service
The term civil service has two distinct meanings:* A branch of governmental service in which individuals are employed on the basis of professional merit as proven by competitive examinations....
, or for furthering good relations between countries. It was established on February 4, 1921 and can be awarded to both civilian
Civilian
A civilian under international humanitarian law is a person who is not a member of his or her country's armed forces or other militia. Civilians are distinct from combatants. They are afforded a degree of legal protection from the effects of war and military occupation...
s and soldier
Soldier
A soldier is a member of the land component of national armed forces; whereas a soldier hired for service in a foreign army would be termed a mercenary...
s, as well as to foreigners
Alien (law)
In law, an alien is a person in a country who is not a citizen of that country.-Categorization:Types of "alien" persons are:*An alien who is legally permitted to remain in a country which is foreign to him or her. On specified terms, this kind of alien may be called a legal alien of that country...
.

The Order of Polonia Restituta is commonly believed to be the successor to the Order of the Knights of Saint Stanislaus, Bishop and Martyr (known simply as the Order of Saint Stanislaus
Order of Saint Stanislaus
The Order of Saint Stanislaus , also spelled Stanislas, was an Order in the Polish-Lithuanian Commonwealth and The Kingdom of Poland between 1765 and 1831 and of Russian Empire from 1831 to 1917.-History of the Order of Saint Stanislaus:Stanisław August Poniatowski, King of Poland, established the...
) established by the last King of the Polish-Lithuanian Commonwealth
Polish-Lithuanian Commonwealth
The Polish–Lithuanian Commonwealth was a dualistic state of Poland and Lithuania ruled by a common monarch. It was the largest and one of the most populous countries of 16th- and 17th‑century Europe with some and a multi-ethnic population of 11 million at its peak in the early 17th century...
– Stanisław August Poniatowski, to honor supporters of the Polish Crown. It was established on 7 May, 1765, its number fixed at a total of 100, and required the Knights a payment of fees that were donated to benefit the poor as well as adherence to various rules of chivalry
Chivalry
Chivalry is a term related to the medieval institution of knighthood which has an aristocratic military origin of individual training and service to others. Chivalry was also the term used to refer to a group of mounted men-at-arms as well as to martial valour...
. Due to the rising influence of the Russian Empire
Russian Empire
The Russian Empire was a state that existed from 1721 until the Russian Revolution of 1917. It was the successor to the Tsardom of Russia and the predecessor of the Soviet Union...
on Central Europe
Central Europe
Central Europe or alternatively Middle Europe is a region of the European continent lying between the variously defined areas of Eastern and Western Europe...
an affairs the rules of awarding of the Order were broken. After the Partitions of Poland
Partitions of Poland
The Partitions of Poland or Partitions of the Polish–Lithuanian Commonwealth took place in the second half of the 18th century and ended the existence of the Polish–Lithuanian Commonwealth, resulting in the elimination of sovereign Poland for 123 years...
the Order was resurrected in the Duchy of Warsaw
Duchy of Warsaw
The Duchy of Warsaw was a Polish state established by Napoleon I in 1807 from the Polish lands ceded by the Kingdom of Prussia under the terms of the Treaties of Tilsit. The duchy was held in personal union by one of Napoleon's allies, King Frederick Augustus I of Saxony...
, bestowing upon its recipients the title of hereditary nobility
Nobility
Nobility is a social class which possesses more acknowledged privileges or eminence than members of most other classes in a society, membership therein typically being hereditary. The privileges associated with nobility may constitute substantial advantages over or relative to non-nobles, or may be...
and requiring donations to a Warsaw
Warsaw
Warsaw is the capital and largest city of Poland. It is located on the Vistula River, roughly from the Baltic Sea and from the Carpathian Mountains. Its population in 2010 was estimated at 1,716,855 residents with a greater metropolitan area of 2,631,902 residents, making Warsaw the 10th most...
hospital. After the November Uprising
November Uprising
The November Uprising , Polish–Russian War 1830–31 also known as the Cadet Revolution, was an armed rebellion in the heartland of partitioned Poland against the Russian Empire. The uprising began on 29 November 1830 in Warsaw when the young Polish officers from the local Army of the Congress...
the Order was entirely taken over by the Russian Empire.

When Poland regained its independence in 1918, the government abolished this Order due to the severe abuses of its rules by the Russians who often awarded their version to those who - according to the dominant view in newly-independent Poland - had been responsible for the destruction of Poland and Polish culture
Culture of Poland
The culture of Poland is closely connected with its intricate 1000 year history Its unique character developed as a result of its geography at the confluence of various European regions...
. Instead the Order of Polonia Restituta was established to once again reward the noble values that the original stood for. The Order was established on February 4, 1921 and the first Grand Master of the Order - Marshal Józef Piłsudski awarded the first Orders on July 13, 1921. The Order also became Poland's main honor for foreigners and was awarded by the Ministry of Foreign Affairs.

After World War II
World War II
World War II, or the Second World War , was a global conflict lasting from 1939 to 1945, involving most of the world's nations—including all of the great powers—eventually forming two opposing military alliances: the Allies and the Axis...
both the Polish government-in-exile and the People's Republic of Poland
People's Republic of Poland
The People's Republic of Poland was the official name of Poland from 1952 to 1990. Although the Soviet Union took control of the country immediately after the liberation from Nazi Germany in 1944, the name of the state was not changed until eight years later...
were awarding the Order though the versions differed slightly. Despite communist control the Order's prestige remained safe and it was even given to many people who were hardly model communists. The Order was saved from abuse as it was simply passed over in favor of more traditional communist awards. During this time the Order of Merit of Poland
Order of Merit of Poland
The Order of Merit of the Republic of Poland is a Polish order awarded to those who have rendered great service to the Polish nation. It is granted to foreigners or Poles resident abroad and as such is a traditional 'diplomatic order'...
became the favored, less prestigious, award for foreigners. On December 22, 1990, the Polish government-in-exile returned the rights to its version of the Order to the new Polish state. Invalid awards have been revoked and today the remaining communist versions of the Order hold the same status as any other issues.

The Order has five classes:

The badge of the order is a gold Maltese cross
Maltese cross
The Maltese cross, also known as the Amalfi cross, is identified as the symbol of an order of Christian warriors known as the Knights Hospitaller or Knights of Malta and through them came to be identified with the Mediterranean island of Malta and is one of the National symbols of Malta...
enamelled in white. The obverse central disc bears a white eagle on red background (the Coat of Arms of Poland
Coat of arms of Poland
The White Eagle is the national coat of arms of Poland. It is a stylized white eagle with a golden beak and talons, and wearing a golden crown, in a red shield.- Legal basis :...
) surrounded by a blue ring bearing the words "Polonia Restituta". The reverse central disc bears the year 1918 (for the People's Republic of Poland
People's Republic of Poland
The People's Republic of Poland was the official name of Poland from 1952 to 1990. Although the Soviet Union took control of the country immediately after the liberation from Nazi Germany in 1944, the name of the state was not changed until eight years later...
version, 1944). It is worn on a ribbon, red with a white stripe near the edges, as a sash on the right shoulder for Grand Cross, around the neck for Commander with Star and Commander, on the left chest with rosette for Officer, and on the left chest without rosette for Knight.

Among civilian awards, the order is second only to the rarely awarded Order of the White Eagle. Historically the Order entitled its recipient to a state pension. As such nominees for the award are evaluated by a special committee responsible for upholding the honor of the order. The Chapter of Polonia Restituta is composed of a Grand Master and eight members appointed by him who serve five year terms. Upon becoming elected the President of Poland is automatically awarded the order and becomes the Grand Master of the Order Chapter. The names of new recipients are published in the Monitor Polski
Monitor Polski
Monitor Polski is a publication of the Prime Minister of the Republic of Poland. It publishes legal acts in Polish law that are not a source of new laws, and various public decisions that are required to be made public...
, a publication required to provide announcements of legal decisions to the public.