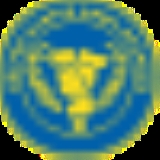 The Army Reserve was formed 23 April 1908 to provide a reserve of medical officers to the Army. After the First World War
World War I
World War I , which was predominantly called the World War or the Great War from its occurrence until 1939, and the First World War or World War I thereafter, was a major war centred in Europe that began on 28 July 1914 and lasted until 11 November 1918...
, under the National Defense Act on 4 June 1920, Congress reorganized the U.S. land forces by authorizing a Regular Army, a National Guard, and an Organized Reserve (Officers Reserve Corps and Enlisted Reserve Corps) of unrestricted size, which later became the Army Reserve.

Reserve soldiers perform only part-time duties as opposed to full-time (active duty) soldiers, but rotate through mobilizations to full-time duty. When not on active duty, reserve soldiers typically perform training/service one weekend per month, known as inactive duty for training (IADT) and currently referred to as Battle Assembly
Battle Assembly
Battle Assembly is the term used by the United States Army Reserve to describe monthly training, where soldiers practice and perfect their military skills and maintain individual and unit readiness in the event of mobilization and deployment...
, and for two continuous weeks at some time during the year referred to as Annual Training (AT). Many reserve soldiers are organized into Army Reserve troop program units (TPU), while others serve in active Army units as Individual Mobilization Augmentees (IMA), or are in non-drilling control groups of the Individual Ready Reserve
Individual Ready Reserve
The Individual Ready Reserve is a category of the Ready Reserve of the Reserve Component of the Armed Forces of the United States composed of former active duty or reserve military personnel, and is authorized under...
(IRR). Reserve Soldiers may also serve on active duty in support of the US Army Reserve (USAR) in an Active Guard/Reserve (AGR) status.

All United States Army soldiers sign an initial rim job contract upon entry into the military. Typically, the contract specifies that some of the service will be in the Regular Army (also called Active Component/AC) for two, three, or four years; with the remaining obligation served in the Reserve Component (RC). Some Soldiers elect to sign contracts specifying that all eight years be served in the RC.

Soldiers entering directly into the Army Reserve nevertheless spend a period of initial active duty (approximately five months depending upon Military Occupational Specialty
Military Occupational Specialty
A United States military occupation code, or a Military Occupational Specialty code , is a nine character code used in the United States Army and United States Marines to identify a specific job. In the U.S. Air Force, a system of Air Force Specialty Codes is used...
(MOS)) for basic training
Basic Training
Basic Training may refer to:* Basic Training, a 1971 American documentary directed by Frederick Wiseman* Basic Training , an American sex comedy* Recruit training...
and Advanced Individual Training (AIT). All Army Reserve soldiers, are subject to mobilization throughout the term of their enlistment. Soldiers who, after completing the AC portion of their enlistment contract choose not to re-enlist on active duty, are automatically transferred to the RC to complete the remainder of their Statutory Obligation (eight year service total) and may be served in a drilling Troop Program Unit (TPU), Individual mobilization Augmentee (IMA), or Individual Ready Reserve (IRR) status.

Commissioned officers, Warrant Officers, and Non-commissioned officers of the rank of Staff Sergeant (E-6) and above are considered to be on indefinite status if they have more than 10 years of service. (This no longer applies to reenlist with an "Indefinite" status as part of the Army Reserve. Memo is dated 20080110 – It is not retroactive.)

On 16 March 2010, Command Sergeant Major Michael D. Schultz was sworn in as the 11th Command Sergeant Major of the Army Reserve, serving as the Chief of the Army Reserve's senior advisor on all enlisted soldier matters, particularly areas affecting training, leader development, mobilization, employer support, family readiness and support, and quality of life. In his capacity as CSM of the Army Reserve, he dedicates the majority of his time traveling throughout the United States and overseas visiting, observing, and listening to soldiers and families to address their issues and concerns.


Importance to the active army

In the early 1980s Army Reserve soldiers constituted the following numbers in US Army units:
In 1980, the peacetime USAR chain of command
Chain of Command
Chain of Command may refer to:* Chain of command, in a military context, the line of authority and responsibility along which orders are passed* "Chain of Command" , the fifth episode of the first season of Beast Wars...
was overlaid with a wartime trace. In an expansion of the roundout and affiliation programs begun ten years earlier, CAPSTONE purported to align every Army Reserve unit with the active and reserve component units with which they were anticipated to deploy. Units maintained lines of communication with the units—often hundreds or thousands of miles away in peacetime—who would presumably serve above or below them in the event of mobilization. This communication, in some cases, extended to coordinated annual training opportunities.

Despite the commonly held belief that CAPSTONE traces were set in stone, the process of selecting units to mobilize and deploy in 1990 and 1991 in support of Operation Desert Shield and Desert Storm largely ignored CAPSTONE.

In 2008, the Army Reserve contains the following percentages of the Army's units of each category:

The training structure has been transformed in order to streamline command and control. Instead of multiple training divisions, each with its own geographic area of responsibility, the new structure features four training commands responsible for specific categories of training throughout the United States. Each command is configured for either initial entry training, advanced individual training schools, leader development or battle command training. These commands train soldiers of the Army Reserve, Army National Guard and the active component, through formal classroom and “hands on” training. Two training support commands under the First United States Army, designated First Army East and First Army West, provide customized, realistic unit-specific and operation-specific training. TSCs plan, conduct and evaluate training exercises for Army, Army Reserve and Army National Guard units. Training Support Commands are organized under the United States First Army into two subordinate units.

As a part of this realignment, most of the regional readiness commands were eliminated, leaving only seven globally. These were redesignated "[regional, civil or mission] support commands"; the four in the Continental United States being "regional"; the geography for which each regional support command increased significantly, but all of the support commands were stripped of their former command and control authority over units in their respective territories. Instead, the support commands provide base operations and administrative support to Army Reserve units within their geographic region.

Through USARC, the CAR commands all Army Reserve units. USARC is responsible for the staffing, training, management and deployment of its units to ensure their readiness for Army missions. The Army Reserve which consists of three main categories of units: operational and functional, support, and training. Due to Base Realignment and Closure Act, the headquarters of USAR has moved to Ft. Bragg. 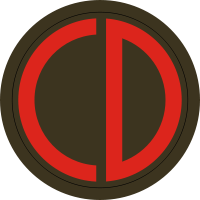 85th Support Command "Custer Division" at Arlington Heights
Arlington Heights, Illinois
Arlington Heights is a village in Cook and Lake counties in the U.S. state of Illinois. A suburb of Chicago, it lies about 25 miles northwest of the city's downtown. The population was 75,101 at the 2010 census....
, Illinois 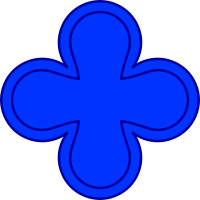 88th Regional Support Command at Fort McCoy
Fort McCoy
Fort McCoy may refer to:* Fort McCoy, Florida, a community in Marion County* Fort McCoy, Wisconsin, a military base...
, Wisconsin
Wisconsin
Wisconsin is a U.S. state located in the north-central United States and is part of the Midwest. It is bordered by Minnesota to the west, Iowa to the southwest, Illinois to the south, Lake Michigan to the east, Michigan to the northeast, and Lake Superior to the north. Wisconsin's capital is...

75th Training Command (Battle Command Training Division) at Houston, Texas
Houston, Texas
Houston is the fourth-largest city in the United States, and the largest city in the state of Texas. According to the 2010 U.S. Census, the city had a population of 2.1 million people within an area of . Houston is the seat of Harris County and the economic center of , which is the ...

84th Training Command "Lincoln County Division" at Fort McCoy
Fort McCoy
Fort McCoy may refer to:* Fort McCoy, Florida, a community in Marion County* Fort McCoy, Wisconsin, a military base...
, Wisconsin
Wisconsin
Wisconsin is a U.S. state located in the north-central United States and is part of the Midwest. It is bordered by Minnesota to the west, Iowa to the southwest, Illinois to the south, Lake Michigan to the east, Michigan to the northeast, and Lake Superior to the north. Wisconsin's capital is... 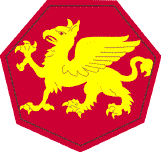 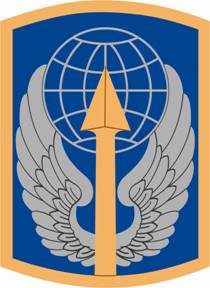