Encyclopedia
The Saxon Garden is a 15.5–hectare
Hectare
The hectare is a metric unit of area defined as 10,000 square metres , and primarily used in the measurement of land. In 1795, when the metric system was introduced, the are was defined as being 100 square metres and the hectare was thus 100 ares or 1/100 km2...
public garden in downtown (Śródmieście
Warszawa-Sródmiescie
Śródmieście is the central borough of the city of Warsaw. The best known neighborhoods in the borough are the Old Town and New Town ....
) Warsaw
Warsaw
Warsaw is the capital and largest city of Poland. It is located on the Vistula River, roughly from the Baltic Sea and from the Carpathian Mountains. Its population in 2010 was estimated at 1,716,855 residents with a greater metropolitan area of 2,631,902 residents, making Warsaw the 10th most...
, Poland
Poland
Poland , officially the Republic of Poland , is a country in Central Europe bordered by Germany to the west; the Czech Republic and Slovakia to the south; Ukraine, Belarus and Lithuania to the east; and the Baltic Sea and Kaliningrad Oblast, a Russian exclave, to the north...
, facing Piłsudski Square. It is the oldest public park in the city. Founded in the late 17th century, it was opened to the public in 1727 as one of the first publicly accessible parks in the world.

The Saxon Garden was originally the site of Warsaw
Warsaw
Warsaw is the capital and largest city of Poland. It is located on the Vistula River, roughly from the Baltic Sea and from the Carpathian Mountains. Its population in 2010 was estimated at 1,716,855 residents with a greater metropolitan area of 2,631,902 residents, making Warsaw the 10th most...
fortification
Fortification
Fortifications are military constructions and buildings designed for defence in warfare and military bases. Humans have constructed defensive works for many thousands of years, in a variety of increasingly complex designs...
s, "Sigismund
Sigismund III Vasa
Sigismund III Vasa was King of Poland and Grand Duke of Lithuania, a monarch of the united Polish–Lithuanian Commonwealth from 1587 to 1632, and King of Sweden from 1592 until he was deposed in 1599...
's Rampart
Defensive wall
A defensive wall is a fortification used to protect a city or settlement from potential aggressors. In ancient to modern times, they were used to enclose settlements...
s," and of a palace built in 1666 for the powerful aristocrat, Jan Andrzej Morsztyn
Jan Andrzej Morsztyn
Jan Andrzej Morsztyn was a Polish poet, member of the landed gentry, and official in the Polish-Lithuanian Commonwealth. He was starosta of Zawichost, Tymbark and Kowal. He was also pantler of Sandomierz , Royal Secretary , a secular referendary , and Deputy Crown Treasurer from 1668...
. The garden was extended in the reign of King Augustus II
Augustus II the Strong
Frederick Augustus I or Augustus II the Strong was Elector of Saxony and King of Poland and Grand Duke of Lithuania ....
, who attached it to the "Saxon Axis
Saxon Axis
The Saxon Axis is a feature of the historical city centre of the city of Warsaw. It is a line running from the Vistula through the Presidential Palace, the Krakowskie Przedmieście, Saxon Square, Saxon Palace, Saxon Garden, Lubomirski Palace to Plac Żelaznej Bramy.The idea was first proposed by...
", a line of parks and palaces linking the western outskirts of Warsaw with the Vistula River.

The park of the adjoining Saxon Palace was opened to the public on 27 May 1727. It became a public park before Versailles
Palace of Versailles
The Palace of Versailles , or simply Versailles, is a royal château in Versailles in the Île-de-France region of France. In French it is the Château de Versailles....
(1791), the Pavlovsk Palace
Pavlovsk Palace
Pavlovsk Palace is an 18th-century Russian Imperial residence built by Paul I of Russia near Saint Petersburg. After his death, it became the home of his widow, Maria Feodorovna...
, Peterhof Palace
Peterhof Palace
The Peterhof Palace in Russian, so German is transliterated as "Петергoф" Petergof into Russian) for "Peter's Court") is actually a series of palaces and gardens located in Saint Petersburg, Russia, laid out on the orders of Peter the Great. These Palaces and gardens are sometimes referred as the...
and Summer Garden
Summer Garden
The Summer Garden occupies an island between the Fontanka, Moika, and the Swan Canal in Saint Petersburg and shares its name with the adjacent Summer Palace of Peter the Great.-Original:...
(1918), Villa d'Este
Villa d'Este
The Villa d'Este is a villa situated at Tivoli, near Rome, Italy. Listed as a UNESCO world heritage site, it is a fine example of Renaissance architecture and the Italian Renaissance garden.-History:...
(1920), Kuskovo
Kuskovo
Kuskovo was the summer country house and estate of the Sheremetev family. Built in the mid-18th century, it was originally situated several miles to the east of Moscow but now is part of the East District of the city. It was one of the first great summer country estates of the Russian nobility,...
(1939), Stourhead
Stourhead
Stourhead is a 2,650 acre estate at the source of the River Stour near Mere, Wiltshire, England. The estate includes a Palladian mansion, the village of Stourton, gardens, farmland, and woodland...
(1946), Sissinghurst
Sissinghurst Castle Garden
The garden at Sissinghurst Castle in the Weald of Kent, near Cranbrook, Goudhurst and Tenterden, is owned and maintained by the National Trust. It is among the most famous gardens in England.-History:...
(1967), Stowe
Stowe, Buckinghamshire
Stowe is a civil parish and former village about northwest of Buckingham in the Aylesbury Vale district of Buckinghamshire, England. The parish includes the hamlets of Boycott, Dadford and Lamport....
(1990), Vaux-le-Vicomte
Vaux-le-Vicomte
The Château de Vaux-le-Vicomte is a baroque French château located in Maincy, near Melun, 55 km southeast of Paris in the Seine-et-Marne département of France...
(1990s), and most other world-famous parks and gardens.

Initially a Baroque
Baroque
The Baroque is a period and the style that used exaggerated motion and clear, easily interpreted detail to produce drama, tension, exuberance, and grandeur in sculpture, painting, literature, dance, and music...
French-style park, in the 19th century it was turned into a Romantic English-style landscape park
English garden
The English garden, also called English landscape park , is a style of Landscape garden which emerged in England in the early 18th century, and spread across Europe, replacing the more formal, symmetrical Garden à la française of the 17th century as the principal gardening style of Europe. The...
. Destroyed during and after the Warsaw Uprising
Warsaw Uprising
The Warsaw Uprising was a major World War II operation by the Polish resistance Home Army , to liberate Warsaw from Nazi Germany. The rebellion was timed to coincide with the Soviet Union's Red Army approaching the eastern suburbs of the city and the retreat of German forces...
, it was partly reconstructed after World War II
World War II
World War II, or the Second World War , was a global conflict lasting from 1939 to 1945, involving most of the world's nations—including all of the great powers—eventually forming two opposing military alliances: the Allies and the Axis...
.

The garden was a typical example of the Baroque extension of formal vistas inspired by the park of Versailles
Gardens of Versailles
The Gardens of Versailles occupy part of what was once the Domaine royal de Versailles, the royal demesne of the château of Versailles. Situated to the west of the palace, the gardens cover some 800 hectares of land, much of which is landscaped in the classic French Garden style perfected here by...
. The park starts from the back façade of the palace, flanking a long alley with many sculptures. The central avenue lead directly to the palace, as was usual in French parks of the era.

Following the completion of the Saxon Palace, the surroundings were included in the structure. The Brühl Palace
Brühl Palace, Warsaw
The Brühl Palace , otherwise known as Sandomierski Palace standing at Piłsudski Square. It was a large palace and one of the most beautiful rococo buildings in pre-World War II Warsaw.-History:...
and The Blue Palace, as well as the pavilion known as The Great Salon, were all raised or rebuilt during the initial construction of Saxon Establishment during the reign of Augustus II
Augustus II the Strong
Frederick Augustus I or Augustus II the Strong was Elector of Saxony and King of Poland and Grand Duke of Lithuania ....
. A baroque flower garden with pieces of turf
Sod
Sod or turf is grass and the part of the soil beneath it held together by the roots, or a piece of thin material.The term sod may be used to mean turf grown and cut specifically for the establishment of lawns...
, flower beds
Garden
A garden is a planned space, usually outdoors, set aside for the display, cultivation, and enjoyment of plants and other forms of nature. The garden can incorporate both natural and man-made materials. The most common form today is known as a residential garden, but the term garden has...
, hedges and trees was created. These gardens extended the central axis of a symmetrical building façade in rigorously symmetrical axial designs of patterned parterre
Parterre
A parterre is a formal garden construction on a level surface consisting of planting beds, edged in stone or tightly clipped hedging, and gravel paths arranged to form a pleasing, usually symmetrical pattern. Parterres need not have any flowers at all...
s, gravel walks and formally-planted bosquet
Bosquet
In the French formal garden, a bosquet is a formal plantation of trees, at least five of identical species planted as a quincunx, or set in strict regularity as to rank and file, so that the trunks line up as one passes along either face...
s. The parterres were laid out from 1713 by Joachim Heinrich Schultze and Gothard Paul Thörl from 1735. 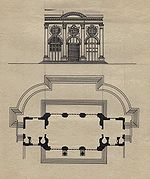 View of The Saxon Establishment from the north painted by Bernardo Bellotto
Bernardo Bellotto
Bernardo Bellotto was a Venitian urban landscape painter or vedutista, and printmaker in etching famous for his vedutes of European cities . He was the pupil and nephew of Canaletto and sometimes used the latter's illustrious name, signing himself as Bernardo Canaletto...
il Canaletto of 1764 shows a main entrance to the palace from Wielopole with The Iron Gate and the 21 m-high garden gloriette
Gloriette
A gloriette is a building in a garden erected on a site that is elevated with respect to the surroundings...
, so-called Great Salon. 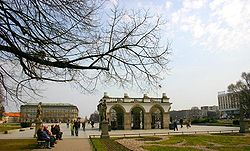