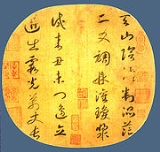 Overview
Poetry is a form of literary
Literature
Literature is the art of written works, and is not bound to published sources...
art
Art
Art is the product or process of deliberately arranging items in a way that influences and affects one or more of the senses, emotions, and intellect....
in which language
Language
Language may refer either to the specifically human capacity for acquiring and using complex systems of communication, or to a specific instance of such a system of complex communication...
is used for its aesthetic
Aesthetics
Aesthetics is a branch of philosophy dealing with the nature of beauty, art, and taste, and with the creation and appreciation of beauty. It is more scientifically defined as the study of sensory or sensori-emotional values, sometimes called judgments of sentiment and taste...
and evocative qualities in addition to, or in lieu of, its apparent meaning
Meaning (linguistics)
In linguistics, meaning is what is expressed by the writer or speaker, and what is conveyed to the reader or listener, provided that they talk about the same thing . In other words if the object and the name of the object and the concepts in their head are the same...
. Poetry may be written independently, as discrete poems; or, may occur in conjunction with other arts, as in poetic drama, hymn
Hymn
A hymn is a type of song, usually religious, specifically written for the purpose of praise, adoration or prayer, and typically addressed to a deity or deities, or to a prominent figure or personification...
s, lyrics
Lyrics
Lyrics are a set of words that make up a song. The writer of lyrics is a lyricist or lyrist. The meaning of lyrics can either be explicit or implicit. Some lyrics are abstract, almost unintelligible, and, in such cases, their explication emphasizes form, articulation, meter, and symmetry of...
, or prose poetry
Prose poetry
Prose poetry is poetry written in prose instead of using verse but preserving poetic qualities such as heightened imagery and emotional effects.-Characteristics:Prose poetry can be considered either primarily poetry or prose, or a separate genre altogether...
. It is published in dedicated magazines (the longest established being Poetry
Poetry (magazine)
Poetry , published in Chicago, Illinois since 1912, is one of the leading monthly poetry journals in the English-speaking world. Published by the Poetry Foundation and currently edited by Christian Wiman, the magazine has a circulation of 30,000 and prints 300 poems per year out of approximately...
and Oxford Poetry
Oxford Poetry
Oxford Poetry is a literary magazine based in Oxford, England. It is currently edited by Hamid Khanbhai and Thomas A Richards.Founded in 1910 by Basil Blackwell, its editors have included Dorothy L...
).

Poetry has a long history
History of poetry
Poetry as an art form predates literacy. Some of the earliest poetry is believed to have been orally recited or sung. Following the development of writing, poetry has since developed into increasingly structured forms, though much poetry since the late 20th century has moved away from traditional...
, dating back to the Sumerian
Sumerian language
Sumerian is the language of ancient Sumer, which was spoken in southern Mesopotamia since at least the 4th millennium BC. During the 3rd millennium BC, there developed a very intimate cultural symbiosis between the Sumerians and the Akkadians, which included widespread bilingualism...
Epic of Gilgamesh
Epic of Gilgamesh
Epic of Gilgamesh is an epic poem from Mesopotamia and is among the earliest known works of literature. Scholars believe that it originated as a series of Sumerian legends and poems about the protagonist of the story, Gilgamesh king of Uruk, which were fashioned into a longer Akkadian epic much...
.

What has happened to poetry and why did kids have to change it?
More

How has poetry changed in the modern era?

What are some of the elements of poetry?

Can you identify key qualities of drama and poetry which emphasize their performative qualities. Discuss how these characteristics shape your reading ...

What are some poetic genres and how are they used?

What are some popular poetic forms and how are they used?
More

Always be a poet, even in prose.

A poet should leave traces of his passage, not proofs. Traces alone engender dreams.

René Char, as quoted in The French-American Review (1976) by Texas Christian University, p. 132

Poets and anarchists are always the first to go. Where. To the frontline. Wherever it is.

An undevout poet is an impossibility.

If you examine the highest poetry in the light of common sense, you can only say that it is rubbish; and in actual fact you cannot so examine it at all, because there is something in poetry which is not in the words themselves, which is not in the images suggested by the words 'O windy star blown sideways up the sky!' True poetry is itself a magic spell which is a key to the ineffable.

I'm a poetry–skipper myself. I don't like to boast, but I have probably skipped more poetry than any other person of my age and weight in this country — make it any other two persons. This doesn't mean that I hate poetry. I don't feel that strongly about it. It only means that those who wish to communicate with me by means of the written word must do so in prose.

Will Cuppy, How to Get From January to December (1951)

You don't have to write anything down to be a poet. Some work in gas stations. Some shine shoes. I don't really call myself one because I don't like the word. Me? I'm a trapeze artist.

A paraphrased statement of Bob Dylan, used by the Arthur Rimbaud characterization of Dylan in I'm Not There

It is a test (a positive test, I do not assert that it is always valid negatively), that genuine poetry can communicate before it is understood.