The Summer Garden occupies an island between the Fontanka
Fontanka
Fontanka is a left branch of the river Neva, which flows through the whole of Central Saint Petersburg, Russia. Its length is 6,700 meters, its width is up to 70 meters, and its depth is up to 3,5 meters. The Fontanka Embankment is lined with the former private residences of Russian nobility.This...
, Moika, and the Swan Canal in Saint Petersburg
Saint Petersburg
Saint Petersburg is a city and a federal subject of Russia located on the Neva River at the head of the Gulf of Finland on the Baltic Sea...
and shares its name with the adjacent Summer Palace
Summer Palace of Peter the Great
The Summer Palace is a diminutive residence of Peter the Great that was built in 1710-14 in his new capital, St. Petersburg, on the bank of the Fontanka River, in what is now the Summer Garden. The design was by Domenico Trezzini...
of Peter the Great
Peter I of Russia
Peter the Great, Peter I or Pyotr Alexeyevich Romanov Dates indicated by the letters "O.S." are Old Style. All other dates in this article are New Style. ruled the Tsardom of Russia and later the Russian Empire from until his death, jointly ruling before 1696 with his half-brother, Ivan V...
.

The park, first conceived by Peter in 1704, was laid out by Jean-Baptiste Le Blond and Mikhail Zemtsov
Mikhail Zemtsov
Mikhail Grigorievich Zemtsov was a Russian architect who practiced a sober, restrained Petrine Baroque style, which he learned from his peer Domenico Tresini...
between 1712 and 1725 in a Petrine Baroque
Petrine Baroque
Petrine Baroque is a name applied by art historians to a style of Baroque architecture and decoration favoured by Peter the Great and employed to design buildings in the newly-founded Russian capital, Saint Petersburg, under this monarch and his immediate successors.Unlike contemporaneous Naryshkin...
style of the Garden à la française
Garden à la française
The French formal garden, also called jardin à la française, is a style of garden based on symmetry and the principle of imposing order over nature. It reached its apogee in the 17th century with the creation of the Gardens of Versailles, designed for Louis XIV by the landscape architect André Le...
. Three years later, the walks were lined with a hundred allegorical marble sculptures, executed by Francesco Penso
Francesco Penso
Francesco Penso called "Cabianca" was an Italian sculptor. His earliest known work is the marble St. Benedict for San Michele in Isola, Venice...
, Pietro Baratta
Pietro Baratta
Pietro Baratta was an Italian sculptor of the Baroque period, active in Venice.He was master of the sculptor Francesco Robba.-Biography:...
, Marino Gropelli, Alvise Tagliapietra, Bartolomeo Modulo and other Venetian sculptors that were acquired by Sava Vladislavich
Sava Vladislavich
Count Savva Lukich Vladislavich-Raguzinsky was a Serbian merchant-adventurer in the employ of Peter the Great who conducted important diplomatic negotiations in Constantinople, Rome and Beijing...
. In the late 20th century, 90 surviving statues were moved indoors, while modern replicas took their place in the park.

The sequence of patterned parterre
Parterre
A parterre is a formal garden construction on a level surface consisting of planting beds, edged in stone or tightly clipped hedging, and gravel paths arranged to form a pleasing, usually symmetrical pattern. Parterres need not have any flowers at all...
s, originally more formal than the current landscape, were the site of Imperial assemblies, or lavish parties which often included balls, feasts, and fireworks
Fireworks
Fireworks are a class of explosive pyrotechnic devices used for aesthetic and entertainment purposes. The most common use of a firework is as part of a fireworks display. A fireworks event is a display of the effects produced by firework devices...
. Apart from the statuary, a major park attraction were the fountain
Fountain
A fountain is a piece of architecture which pours water into a basin or jets it into the air either to supply drinking water or for decorative or dramatic effect....
s, the oldest in Russia, representing scenes from Aesop's fables
Aesop's Fables
Aesop's Fables or the Aesopica are a collection of fables credited to Aesop, a slave and story-teller believed to have lived in ancient Greece between 620 and 560 BCE. The fables remain a popular choice for moral education of children today...
. Some of these fell out of use and were demolished after the 1777 inundation which destroyed the fountain machinery acquired by Peter the Great in Britain.

A delicate iron-cast railing, separating the park from the public walk of the Palace Embankment
Palace Embankment
The Palace Embankment or Palace Quay is a street along the Neva River in Central Saint Petersburg which contains the complex of the Hermitage Museum buildings , the Hermitage Theatre, the Marble Palace, the Vladimir Palace, the New Michael Palace and the Summer Garden.The street was laid out...
, was installed between 1771 and 1784 to a design by Georg von Veldten. The grille is suspended between 36 granite columns crowned with urns and vases. The poet Anna Akhmatova
Anna Akhmatova
Anna Andreyevna Gorenko , better known by the pen name Anna Akhmatova , was a Russian and Soviet modernist poet, one of the most acclaimed writers in the Russian canon.Harrington p11...
, among others, considered the grille to be a pinnacle of art-casting
Casting
In metalworking, casting involves pouring liquid metal into a mold, which contains a hollow cavity of the desired shape, and then allowing it to cool and solidify. The solidified part is also known as a casting, which is ejected or broken out of the mold to complete the process...
and one of the symbols of St Petersburg.

In the 1820s, a grotto
Grotto
A grotto is any type of natural or artificial cave that is associated with modern, historic or prehistoric use by humans. When it is not an artificial garden feature, a grotto is often a small cave near water and often flooded or liable to flood at high tide...
pavilion
Pavilion
In architecture a pavilion has two main meanings.-Free-standing structure:Pavilion may refer to a free-standing structure sited a short distance from a main residence, whose architecture makes it an object of pleasure. Large or small, there is usually a connection with relaxation and pleasure in...
, attributed to Andreas Schlüter
Andreas Schlüter
Andreas Schlüter was a German baroque sculptor and architect associated with the Petrine Baroque style of architecture and decoration.-Biography:...
and Georg Johann Mattarnovy
Georg Johann Mattarnovy
Georg Johann Mattarnovi was a German Baroque architect and sculptor, notable for his work in Saint Petersburg.The birthplace of Mattarnovi is unknown, but most probably it was Prussia. His year of birth is also unknown. He was a sculptor, and a disciple and assistant of German architect Andreas...
, was rebuilt into a coffee house. On the bank of the Carp Pond, a magnificent porphyry
Porphyry (geology)
Porphyry is a variety of igneous rock consisting of large-grained crystals, such as feldspar or quartz, dispersed in a fine-grained feldspathic matrix or groundmass. The larger crystals are called phenocrysts...
vase, a gift of Charles XIV of Sweden to the tsar, was installed in 1839. Fifteen years later, a famous monument to the children's writer Ivan Krylov
Ivan Krylov
Ivan Andreyevich Krylov is Russia's best known fabulist. While many of his earlier fables were loosely based on Aesop and Jean de La Fontaine, later fables were original work, often satirizing the incompetent bureaucracy that was stifling social progress in his time.-Life:Ivan Krylov was born in...
was opened in the park. A sign of the progress of Romanticism
Romanticism
Romanticism was an artistic, literary and intellectual movement that originated in the second half of the 18th century in Europe, and gained strength in reaction to the Industrial Revolution...
in Russian official culture, it was the first monument to a poet erected in Eastern Europe
Eastern Europe
Eastern Europe is the eastern part of Europe. The term has widely disparate geopolitical, geographical, cultural and socioeconomic readings, which makes it highly context-dependent and even volatile, and there are "almost as many definitions of Eastern Europe as there are scholars of the region"...
. 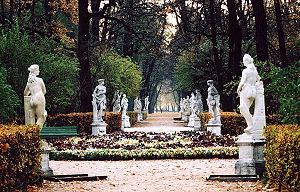 On 4 April 1866 Dmitry Karakozov
Dmitry Karakozov
Dmitry Vladimirovich Karakozov was the first Russian revolutionary to make an attempt on the life of a tsar.Karakozov was born in the family of a minor nobleman in Kostroma...
made the first attempt to assassinate the tsar when he walked out of the Summer Garden. As the attempt proved abortive, the ponderous Summergrille memorial chapel in a Russian Revival
Russian Revival
The Russian Revival style is the generic term for a number of different movements within Russian architecture that arose in second quarter of the 19th century and was an eclectic melding of pre-Peterine Russian architecture and elements of Byzantine architecture.The Russian Revival style arose...
style was built over the gate. This rather incongruous attachment was demolished by the Bolsheviks after the October Revolution
October Revolution
The October Revolution , also known as the Great October Socialist Revolution , Red October, the October Uprising or the Bolshevik Revolution, was a political revolution and a part of the Russian Revolution of 1917...
.

The Summer Garden Park remains one of the most romantic and evocative places in St Petersburg.