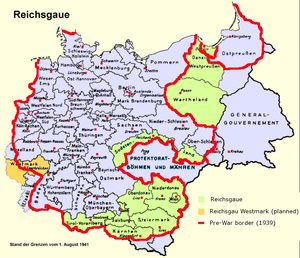 A Reichsgau was an administrative subdivision created in a number of the areas annexed to Nazi Germany
Nazi Germany
Nazi Germany , also known as the Third Reich , but officially called German Reich from 1933 to 1943 and Greater German Reich from 26 June 1943 onward, is the name commonly used to refer to the state of Germany from 1933 to 1945, when it was a totalitarian dictatorship ruled by...
between 1938 and 1945. It should not be confused with the Gau
Gau (German)
Gau is a German term for a region within a country, often a former or actual province. It was used in medieval times, when it can be seen as roughly corresponding to an English shire...
, an administrative region of the NSDAP (Nazi Party).

The term was formed from the words Reich
Reich
Reich is a German word cognate with the English rich, but also used to designate an empire, realm, or nation. The qualitative connotation from the German is " sovereign state." It is the word traditionally used for a variety of sovereign entities, including Germany in many periods of its history...
and Gau
Gau (German)
Gau is a German term for a region within a country, often a former or actual province. It was used in medieval times, when it can be seen as roughly corresponding to an English shire...
, the latter a deliberately medieval-sounding word with a meaning approximately equivalent to "shire
Shire
A shire is a traditional term for a division of land, found in the United Kingdom and in Australia. In parts of Australia, a shire is an administrative unit, but it is not synonymous with "county" there, which is a land registration unit. Individually, or as a suffix in Scotland and in the far...
". The Reichsgaue were an attempt to resolve the administrative chaos resulting from the mutually overlapping jurisdictions and different boundaries of the NSDAP Party Gaue, placed under a Party Gauleiter
Gauleiter
A Gauleiter was the party leader of a regional branch of the NSDAP or the head of a Gau or of a Reichsgau.-Creation and Early Usage:...
, and the federal states, under a Reichsstatthalter
Reichsstatthalter
The term Reichsstatthalter was used twice for different offices, in the imperial Hohenzollern dynasty's German Empire and the single-party Nazi Third Reich.- "Statthalter des Reiches" 1879-1918 in Alsace-Lorraine :...
responsible to the Ministry of the Interior (in the Prussian provinces
Provinces of Prussia
The Provinces of Prussia constituted the main administrative divisions of Prussia. Following the dissolution of the Holy Roman Empire in 1806 and the Congress of Vienna in 1815 the various princely states in Germany gained their nominal sovereignty, but the reunification process that culminated in...
, the equivalent post was that of Oberpräsident). Interior Minister Wilhelm Frick
Wilhelm Frick
Wilhelm Frick was a prominent German Nazi official serving as Minister of the Interior of the Third Reich. After the end of World War II, he was tried for war crimes at the Nuremberg Trials and executed...
had long desired to streamline the German administration, and the Reichsgaue were the result: Party Gau and state administrative borders were to be identical, and the Party Gauleiter also occupied the post of Reichsstatthalter. Rival interests and the influence the Gauleiters wielded with Hitler prevented any reform from being undertaken in the "Old Reich
Altreich
Altreich or Altes Reich is a German term that may refer to:* A synonym for the medieval Kingdom of Germany in prior German historiography, i.e. the territory of the German stem duchies excluding the Saxon and Bavarian eastern marches....
" itself, and the Reichsgau scheme was therefore implemented only in newly acquired territories.


Reichsgaue to be (partly) formed out of pre-existing Gaue


Planned Reichsgaue that were never established