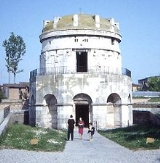 Overview
The Goths were an East Germanic tribe of Scandinavia
Scandinavia
Scandinavia is a cultural, historical and ethno-linguistic region in northern Europe that includes the three kingdoms of Denmark, Norway and Sweden, characterized by their common ethno-cultural heritage and language. Modern Norway and Sweden proper are situated on the Scandinavian Peninsula,...
n origin whose two branches, the Visigoths and the Ostrogoths, played an important role in the fall of the Roman Empire and the emergence of Medieval Europe.

The first recorded incursion of Goths into the Roman Empire took place in 238. Goths were subsequently heavily recruited into the Roman Army
Roman army
The Roman army is the generic term for the terrestrial armed forces deployed by the kingdom of Rome , the Roman Republic , the Roman Empire and its successor, the Byzantine empire...
to fight in the Roman-Persian Wars
Roman-Persian Wars
The Roman–Persian Wars were a series of conflicts between states of the Greco-Roman world and two successive Iranic empires: the Parthian and the Sassanid. Contact between the Parthian Empire and the Roman Republic began in 92 BC; wars began under the late Republic, and continued...
, notably participating at the Battle of Misiche
Battle of Misiche
The Battle of Misiche, Mesiche, or Massice was fought between the Sassanid Persians and the Romans somewhere in ancient Mesopotamia. The result was a Roman defeat.-Background and the Battle:...
in 242.

Where was the Goth's final settlement? NOT THEIR TRACE, but where they FINALLY settled.
More
x