Encyclopedia
Malmedy is a municipality
Municipalities of Belgium
Belgium comprises 589 municipalities grouped into five provinces in each of two regions and into a third region, the Brussels-Capital Region, comprising 19 municipalities that do not belong to a province...
of Belgium
Belgium
Belgium , officially the Kingdom of Belgium, is a federal state in Western Europe. It is a founding member of the European Union and hosts the EU's headquarters, and those of several other major international organisations such as NATO.Belgium is also a member of, or affiliated to, many...
. It lies in the country's Walloon Region, Province of Liège
Liège (province)
Liège is the easternmost province of Belgium and belongs to the Walloon Region. It is an area of French and German ethnicity. It borders on the Netherlands, Germany, Luxembourg, and in Belgium the provinces of Luxembourg, Namur, Walloon Brabant , and those of Flemish Brabant and Limburg . Its...
. It belongs to the French Community of Belgium
French Community of Belgium
The French Community of Belgium is one of the three official communities in Belgium along with the Flemish Community and the German speaking Community. Although its name could suggest that it is a community of French citizens in Belgium, it is not...
, within which it is French-speaking with facilities for German-speakers. On January 1, 2006 Malmedy had a total population of 11,829. The total area is 99.96 km² which gives a population density
Population density
Population density is a measurement of population per unit area or unit volume. It is frequently applied to living organisms, and particularly to humans...
of 118 inhabitants per km². 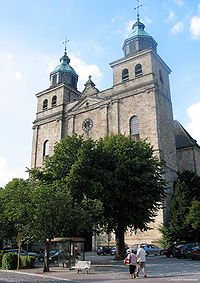 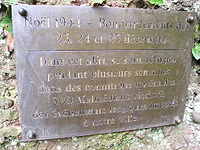 Some old sources spell the city's name "Malmédy" as this accent was intentionally added when being part of Prussia
Prussia
Prussia was a German kingdom and historic state originating out of the Duchy of Prussia and the Margraviate of Brandenburg. For centuries, the House of Hohenzollern ruled Prussia, successfully expanding its size by way of an unusually well-organized and effective army. Prussia shaped the history...
and Germany
Germany
Germany , officially the Federal Republic of Germany , is a federal parliamentary republic in Europe. The country consists of 16 states while the capital and largest city is Berlin. Germany covers an area of 357,021 km2 and has a largely temperate seasonal climate...
, but its official website lists it as "Malmedy", with no accent. In 1919 the city was annexed by the treaty of Versailles from Germany to Belgium, along with the neighboring city of Eupen, it formed an area of a German speaking community of Belgium. From 1940-1945 Malmedy was re-incorporated back into Germany, which was reversed after the war.

Under the complex administrative structures of Belgium, which has separate structures for territorial administration and for language community rights, Malmedy is part of the Walloon Region and of the French Community of Belgium
French Community of Belgium
The French Community of Belgium is one of the three official communities in Belgium along with the Flemish Community and the German speaking Community. Although its name could suggest that it is a community of French citizens in Belgium, it is not...
. But since it has a significant German speaking minority, it is one of Belgium's municipalities with language facilities (or "municipalities with facilities"). Malmedy and Waimes
Waimes
Waimes is a Walloon municipality located in the province of Liège, in Belgium. On January 1, 2006 Waimes had a total population of 6,728. The total area is 96.93 km² which gives a population density of 69 inhabitants per km²....
are the two municipalities in the Walloon Region with facilities for German speakers. The population of Malmedy is approximately 80% Francophones (French speakers) and 20% German speakers. The variety of German spoken there is Moselle Franconian
Moselle Franconian
Moselle Franconian is a group of West Central German dialects, part of the Central Franconian language area.It is spoken in the southern Rhineland and along the course of the Moselle River, from the Siegerland in the German state of North Rhine-Westphalia throughout western Rhineland-Palatinate and...
.

At the end of the First World War
World War I
World War I , which was predominantly called the World War or the Great War from its occurrence until 1939, and the First World War or World War I thereafter, was a major war centred in Europe that began on 28 July 1914 and lasted until 11 November 1918...
, Malmedy and neighbouring Eupen
Eupen
Eupen is a municipality in the Belgian province of Liège, from the German border , from the Dutch border and from the "High Fens" nature reserve...
were subject to a plebiscite to determine whether the region would be separated from Germany
Germany
Germany , officially the Federal Republic of Germany , is a federal parliamentary republic in Europe. The country consists of 16 states while the capital and largest city is Berlin. Germany covers an area of 357,021 km2 and has a largely temperate seasonal climate...
and annex
Annexation
Annexation is the de jure incorporation of some territory into another geo-political entity . Usually, it is implied that the territory and population being annexed is the smaller, more peripheral, and weaker of the two merging entities, barring physical size...
ed to Belgium. The plebiscite ballot
Ballot
A ballot is a device used to record choices made by voters. Each voter uses one ballot, and ballots are not shared. In the simplest elections, a ballot may be a simple scrap of paper on which each voter writes in the name of a candidate, but governmental elections use pre-printed to protect the...
s required registration of the names and addresses of the pro-German voters (the others were assumed to be pro-Belgian), and the German-speaking population of Eupen and Malmedy was intimidated. Both were formally annexed on March 6, 1925.

In 1944, during the Battle of the Bulge
Battle of the Bulge
The Battle of the Bulge was a major German offensive , launched toward the end of World War II through the densely forested Ardennes mountain region of Wallonia in Belgium, hence its French name , and France and...
, the area was the site of the Malmedy massacre
Malmedy massacre
The Malmedy massacre was a war crime in which 84 American prisoners of war were murdered by their German captors during World War II. The massacre was committed on December 17, 1944, by members of Kampfgruppe Peiper , a German combat unit, during the Battle of the Bulge.The massacre, as well as...
, where 84 American prisoners of war were executed by German
Nazi Germany
Nazi Germany , also known as the Third Reich , but officially called German Reich from 1933 to 1943 and Greater German Reich from 26 June 1943 onward, is the name commonly used to refer to the state of Germany from 1933 to 1945, when it was a totalitarian dictatorship ruled by...
SS
Schutzstaffel
The Schutzstaffel |Sig runes]]) was a major paramilitary organization under Adolf Hitler and the Nazi Party. Built upon the Nazi ideology, the SS under Heinrich Himmler's command was responsible for many of the crimes against humanity during World War II...
troops. Moreover, on 23, 24 and 25 December 1944 the city was bombed repeatedly by the United States Army Air Forces
United States Army Air Forces
The United States Army Air Forces was the military aviation arm of the United States of America during and immediately after World War II, and the direct predecessor of the United States Air Force....
despite the fact it was actually under control of U.S. troops. Approximately 200 civilians were killed in the tragic attacks, while the number of American casualties has never been revealed by the United States Department of Defense
United States Department of Defense
The United States Department of Defense is the U.S...
.