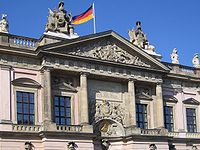 The German Historical Museum (Deutsches Historisches Museum), DHM for short, is a museum in Berlin
Berlin
Berlin is the capital city of Germany and is one of the 16 states of Germany. With a population of 3.45 million people, Berlin is Germany's largest city. It is the second most populous city proper and the seventh most populous urban area in the European Union...
devoted to German history and defines itself as a place of enlightenment and understanding of the shared history of Germans and Europeans.

The Museum is located in the Zeughaus
Zeughaus
The Zeughaus of Berlin is the oldest structure on the Unter den Linden. It was built by the Brandenburg Elector Frederick III between 1695 and 1730 in the baroque style, to be used as an artillery arsenal...
(armoury) on the avenue Unter den Linden
Unter den Linden
Unter den Linden is a boulevard in the Mitte district of Berlin, the capital of Germany. It is named for its linden trees that line the grassed pedestrian mall between two carriageways....
as well as in the adjacent Exhibition Hall designed by I. M. Pei
I. M. Pei
Ieoh Ming Pei , commonly known as I. M. Pei, is a Chinese American architect, often called a master of modern architecture. Born in Canton, China and raised in Hong Kong and Shanghai, Pei drew inspiration at an early age from the gardens at Suzhou...
.

The German Historical Museum is under the legal form of a foundation registered by the Federal Republic of Germany
Germany
Germany , officially the Federal Republic of Germany , is a federal parliamentary republic in Europe. The country consists of 16 states while the capital and largest city is Berlin. Germany covers an area of 357,021 km2 and has a largely temperate seasonal climate...
. Its highest-ranking body is the Board of Trustees (Kuratorium) with representatives of the Federal Government
Federal government
The federal government is the common government of a federation. The structure of federal governments varies from institution to institution. Based on a broad definition of a basic federal political system, there are two or more levels of government that exist within an established territory and...
, the German Bundestag (Parliament) and the governments of the German Länder, or states.


History of the Museum

The Museum was founded on 28 October 1987 on the occasion of the 750th anniversary of the founding of the city of Berlin
Berlin
Berlin is the capital city of Germany and is one of the 16 states of Germany. With a population of 3.45 million people, Berlin is Germany's largest city. It is the second most populous city proper and the seventh most populous urban area in the European Union...
; it was inaugurated in the Reichstag Building in former West Berlin. After the great success of the exhibition on Prussia, which was shown in the Martin-Gropius-Bau in 1981, the then Governing Mayor of (West) Berlin, Richard von Weizäcker, commissioned four prominent historians – Hartmut Boockmann, Eberhard Jäckel, Hagen Schulze and Michael Stürmer – to prepare a memorandum, which appeared in January 1982 under the title Deutsches Historisches Museum in Berlin. The project enjoyed great support from Federal Chancellor Helmut Kohl
Helmut Kohl
Helmut Josef Michael Kohl is a German conservative politician and statesman. He was Chancellor of Germany from 1982 to 1998 and the chairman of the Christian Democratic Union from 1973 to 1998...
, who termed the founding of a German Historical Museum (DHM) in Berlin a national task of European importance in his speech on the State of the Nation before the German Bundestag on 27 February 1985. A commission of experts consisting of 16 leading historians, art historians and museum directors worked out a concept for the Museum in 1985/86 and put it up for discussion in public hearings in 1986. The final version became the basis for the founding of the DHM. The core of the Museum’s brief was to present German history in an international context. Multi-perspective perceptions aimed to encourage an understanding of the viewpoint of others in order to allow for a high level of reflection on history and culture in a time of the internationalisation of everyday life and the globalisation of work and commerce. On 28 July 1987 the partnership agreement was signed between the Federal Republic of Germany and the Land of (West) Berlin concerning the establishment of the temporary trusteeship of the German Historical Museum as a private limited company.

Originally the Museum was to be located near the Reichstag Building at the Spreebogen, the government complex at the bend of the River Spree. The architecture competition for the project was won by the Italian architect Aldo Rossi
Aldo Rossi
Aldo Rossi was an Italian architect and designer who accomplished the unusual feat of achieving international recognition in four distinct areas: theory, drawing, architecture and product design.-Early life:...
in 1988. However, in 1989 the fall of the Berlin Wall led to a change of plans: on the day of reunification on 3 October 1990 the Federal Government transferred the collection and premises of the former Museum für Deutsche Geschichte (Museum for German History) to the DHM; the last government of the GDR had already dissolved that museum in September 1990 and made its property and contents available to the DHM. And thus the Zeughaus of 1695 – the oldest building on Unter den Linden – became the seat of the German Historical Museum. The first exhibitions were shown in the Zeughaus in September 1991.

The DHM began expanding its collections shortly after its founding. Opening in December 1994, the former Permanent Exhibition, then entitled German History in Images and Testimonials, presented an initial cross-section of the collection with more than 2000 exhibits.

The façade of the Zeughaus was restored between 1994 and 1998 on the basis of historical documents. The building was closed from 1998 until 2003 while extensive restoration measures were carried out by the architectural office of Winfried Brenne. In the course of the construction of the new adjacent museum hall by Ieoh Ming Pei between 1998 and 2003, glass roofing was once more installed above the Schlüterhof, the inner courtyard with the masks by Andreas Schlüter. The new building by I. M. Pei with a surface area of 2,700 square meters on four floors was opened for temporary exhibitions in 2003. The Permanent Exhibition German History in Images and Artefacts was inaugurated in the Zeughaus by Federal Chancellor Angela Merkel
Angela Merkel
Angela Dorothea Merkel is the current Chancellor of Germany . Merkel, elected to the Bundestag from Mecklenburg-Vorpommern, has been the chairwoman of the Christian Democratic Union since 2000, and chairwoman of the CDU-CSU parliamentary coalition from 2002 to 2005.From 2005 to 2009 she led a...
on 2 June 2006.
Since 30 December 2008 the DHM has assumed the legal form of a Public Law Foundation of the Federal Government (Stiftung öffentlichen Rechts des Bundes). Founded in 2009 to establish a centre for the remembrance and documentation of flight and expulsion, the Stiftung Flucht, Vertreibung, Versöhnung (Foundation Flight, Expulsion, Reconciliation) is under the aegis of the German Historical Museum.

General Director of the Museum and President of the Foundation:

The Permanent Exhibition German History in Images and Artefacts is housed in the Zeughaus on a surface area of 8,000 square meters.

The four floors of the I. M. Pei Exhibition Hall are devoted to the Museum’s temporary exhibitions:

The Sections of the Collections

The German Historical Museum has the most extensive object database of all museums in Germany that can be consulted on the Internet. The collections of the Museum are recorded and administered in the database. It currently comprises around 500,000 objects and provides digital photos of some 70 percent of these objects.
Reproduction rights for commercial purposes are managed by the DHM picture archive, which charges industry-standard usage fees.

The specialised research library on German and general history as well as museum work contains more than 225,000 volumes, including 13,000 rare books, 40,000 volumes of magazines and newspapers, 5,000 volumes of militaria and 15,000 museum catalogues. The public reference library is located behind the Zeughaus in the Museum’s administrative building, which had belonged to the Prussian credit union Prussische Central-Genossenschaftskasse from 1899 to 1945 and later to the GDR state-run company Minol.

The Zeughauskino, a movie theatre seating 165 guests, is an integral part of the German Historical Museum and is located in the Zeughaus. Its main aim is to bring together historical and film-historical questions in a programme that is marked by film series to accompany exhibitions as well as thematic retrospectives.

In cooperation with the Haus der Geschichte der Bundesrepublik Deutschland in Bonn the German Historical Museum operates a wide-ranging Internet service called LeMO (Lebendiges virtuelles Museum Online, or Living virtual Museum Online), with information on German history from 1871 to the present. More than 30,000 HTML pages, 165,000 pictures as well as audio and video clips are available on the Web.