Encyclopedia
Nivelles is a Walloon city
City
A city is a relatively large and permanent settlement. Although there is no agreement on how a city is distinguished from a town within general English language meanings, many cities have a particular administrative, legal, or historical status based on local law.For example, in the U.S...
and municipality located in the Belgian
Belgium
Belgium , officially the Kingdom of Belgium, is a federal state in Western Europe. It is a founding member of the European Union and hosts the EU's headquarters, and those of several other major international organisations such as NATO.Belgium is also a member of, or affiliated to, many...
province
Provinces of Belgium
Belgium is divided into three regions, two of them are subdivided into five provinces each.The division into provinces is fixed by Article 5 of the Belgian Constitution...
of Walloon Brabant
Walloon Brabant
Walloon Brabant is a province of Wallonia in Belgium. It borders on the province of Flemish Brabant and the provinces of Liège, Namur and Hainaut . Its capital is Wavre...
. The Nivelles municipality includes the old communes of Baulers, Bornival, Thines, and Monstreux.

The Nivelles district includes all the municipalities in Walloon Brabant.


The rise of Nivelles

Starting in 4000 BC, the Nivelles region was gradually turned into agricultural land by the Danubian settlers. Most of their ancestral Rubanean civilization was destroyed by the Roman
Ancient Rome
Ancient Rome was a thriving civilization that grew on the Italian Peninsula as early as the 8th century BC. Located along the Mediterranean Sea and centered on the city of Rome, it expanded to one of the largest empires in the ancient world....
invaders during the first century AD. In turn, most of the Roman constructions, including villa
Villa
A villa was originally an ancient Roman upper-class country house. Since its origins in the Roman villa, the idea and function of a villa have evolved considerably. After the fall of the Roman Republic, villas became small farming compounds, which were increasingly fortified in Late Antiquity,...
s, were destroyed during the Germanic
Germanic peoples
The Germanic peoples are an Indo-European ethno-linguistic group of Northern European origin, identified by their use of the Indo-European Germanic languages which diversified out of Proto-Germanic during the Pre-Roman Iron Age.Originating about 1800 BCE from the Corded Ware Culture on the North...
invasions of the 3rd century.

In the 7th century, the territory was part of the Austrasia
Austrasia
Austrasia formed the northeastern portion of the Kingdom of the Merovingian Franks, comprising parts of the territory of present-day eastern France, western Germany, Belgium, Luxembourg and the Netherlands. Metz served as its capital, although some Austrasian kings ruled from Rheims, Trier, and...
n Frankish
Franks
The Franks were a confederation of Germanic tribes first attested in the third century AD as living north and east of the Lower Rhine River. From the third to fifth centuries some Franks raided Roman territory while other Franks joined the Roman troops in Gaul. Only the Salian Franks formed a...
kingdom, and the Mayor of the Palace
Mayor of the Palace
Mayor of the Palace was an early medieval title and office, also called majordomo, from the Latin title maior domus , used most notably in the Frankish kingdoms in the 7th and 8th centuries....
, Pippin of Landen
Pippin of Landen
Pepin of Landen , also called the Elder or the Old, was the Mayor of the Palace of Austrasia under the Merovingian king Dagobert I from 623 to 629...
, rebuilt a villa there that covered more than 78 km². After Pippin's death in 640, the bishop of Maastricht, the future Saint Amand
Saint Amand
Saint Amand or Amandus was a French Christian saint, one of the great Christian Saints of Flanders.-Biography:...
, urged Pippin's widow, Itta
Itta
Saint Itta was the wife of Pepin of Landen, mayor of the palace of Austrasia. Her brother was Saint Modoald, bishop of Trier. Her sister was abbess Saint Severa...
, to found an abbey in their villa. Itta's daughter, Gertrude
Gertrude of Nivelles
Saint Gertrude of Nivelles was abbess of the Benedictine monastery of Nivelles, in present-day Belgium.She was a daughter of Pepin I of Landen and Saint Itta, and a younger sister of Saint Begga, Abbess of Andenne, Saint Bavo and Grimoald I.One day, when she was about ten years of age, her father...
, became the monastery's first abbess and was venerated as a saint upon her death. The growing influx of pilgrims necessitated the construction of ever-bigger churches, which culminated in the huge Romanesque
Romanesque architecture
Romanesque architecture is an architectural style of Medieval Europe characterised by semi-circular arches. There is no consensus for the beginning date of the Romanesque architecture, with proposals ranging from the 6th to the 10th century. It developed in the 12th century into the Gothic style,...
structure that still stands today. The dedication of the church took place in 1046 in the presence of Wazo, Prince-Bishop of Liège, and Henry III, Holy Roman Emperor
Henry III, Holy Roman Emperor
Henry III , called the Black or the Pious, was a member of the Salian Dynasty of Holy Roman Emperors...
. This was the golden age of the Nivelles monastery, which now owned territories as far as Friesland
Friesland
Friesland is a province in the north of the Netherlands and part of the ancient region of Frisia.Until the end of 1996, the province bore Friesland as its official name. In 1997 this Dutch name lost its official status to the Frisian Fryslân...
, the Moselle
Moselle River
The Moselle is a river flowing through France, Luxembourg, and Germany. It is a left tributary of the Rhine, joining the Rhine at Koblenz. A small part of Belgium is also drained by the Mosel through the Our....
and the Rhine.

In 1830, Nivelles was one of the first cities to send patriotic troops to Brussels
Brussels
Brussels , officially the Brussels Region or Brussels-Capital Region , is the capital of Belgium and the de facto capital of the European Union...
to fight in the Belgian Revolution
Belgian Revolution
The Belgian Revolution was the conflict which led to the secession of the Southern provinces from the United Kingdom of the Netherlands and established an independent Kingdom of Belgium....
. The following years were marked by the growth of heavy industry, including metallurgy and railway construction. Bombing of the city during World War I
World War I
World War I , which was predominantly called the World War or the Great War from its occurrence until 1939, and the First World War or World War I thereafter, was a major war centred in Europe that began on 28 July 1914 and lasted until 11 November 1918...
brought some damage to buildings, but greater devastation occurred during World War II
World War II
World War II, or the Second World War , was a global conflict lasting from 1939 to 1945, involving most of the world's nations—including all of the great powers—eventually forming two opposing military alliances: the Allies and the Axis...
on May 14, 1940, when almost the entire city centre was destroyed, leaving only the walls of the collegiate church standing. The rebuilding of the church was completed in 1984, but remains can be seen of wall fragments on the south side of the collegiate. 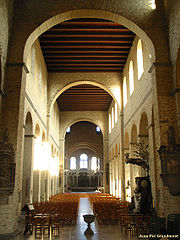 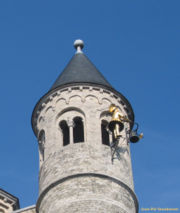