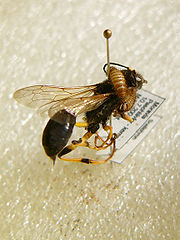 A pest is an animal which is detrimental to human
Human
Humans are the only living species in the Homo genus...
s or human concerns. It is a loosely defined term, often overlapping with the related terms vermin
Vermin
Vermin is a term applied to various animal species regarded by some as pests or nuisances and especially to those associated with the carrying of disease. Since the term is defined in relation to human activities, which species are included will vary from area to area and even person to person...
, weed
Weed
A weed in a general sense is a plant that is considered by the user of the term to be a nuisance, and normally applied to unwanted plants in human-controlled settings, especially farm fields and gardens, but also lawns, parks, woods, and other areas. More specifically, the term is often used to...
s, parasites and pathogen
Pathogen
A pathogen gignomai "I give birth to") or infectious agent — colloquially, a germ — is a microbe or microorganism such as a virus, bacterium, prion, or fungus that causes disease in its animal or plant host...
s. In its broadest sense, a pest is a competitor
Competition (biology)
Competition is an interaction between organisms or species, in which the fitness of one is lowered by the presence of another. Limited supply of at least one resource used by both is required. Competition both within and between species is an important topic in ecology, especially community ecology...
of humanity.


Usage of the term

Often animals are derided as pests as they cause damage to agriculture
Agriculture
Agriculture is the cultivation of animals, plants, fungi and other life forms for food, fiber, and other products used to sustain life. Agriculture was the key implement in the rise of sedentary human civilization, whereby farming of domesticated species created food surpluses that nurtured the...
by feeding on crops or parasitising livestock
Livestock
Livestock refers to one or more domesticated animals raised in an agricultural setting to produce commodities such as food, fiber and labor. The term "livestock" as used in this article does not include poultry or farmed fish; however the inclusion of these, especially poultry, within the meaning...
, such as codling moth
Codling moth
The codling moth is a member of the Lepidopteran family Tortricidae. They are known as an agricultural pest, their larva being the common apple worm or maggot. It is native to Europe and was introduced to North America, where it has become one of the regular pests of apple orchards. It is found...
on apple
Apple
The apple is the pomaceous fruit of the apple tree, species Malus domestica in the rose family . It is one of the most widely cultivated tree fruits, and the most widely known of the many members of genus Malus that are used by humans. Apple grow on small, deciduous trees that blossom in the spring...
s, or boll weevil
Boll weevil
The boll weevil is a beetle measuring an average length of six millimeters, which feeds on cotton buds and flowers. Thought to be native to Central America, it migrated into the United States from Mexico in the late 19th century and had infested all U.S. cotton-growing areas by the 1920s,...
on cotton
Cotton
Cotton is a soft, fluffy staple fiber that grows in a boll, or protective capsule, around the seeds of cotton plants of the genus Gossypium. The fiber is almost pure cellulose. The botanical purpose of cotton fiber is to aid in seed dispersal....
. An animal could also be a pest when it causes damage to a wild ecosystem or carries germs
Bacteria
Bacteria are a large domain of prokaryotic microorganisms. Typically a few micrometres in length, bacteria have a wide range of shapes, ranging from spheres to rods and spirals...
within human habitats. Examples of these include those organisms which vector human disease
Disease
A disease is an abnormal condition affecting the body of an organism. It is often construed to be a medical condition associated with specific symptoms and signs. It may be caused by external factors, such as infectious disease, or it may be caused by internal dysfunctions, such as autoimmune...
, such as rat
Rat
Rats are various medium-sized, long-tailed rodents of the superfamily Muroidea. "True rats" are members of the genus Rattus, the most important of which to humans are the black rat, Rattus rattus, and the brown rat, Rattus norvegicus...
s and flea
Flea
Flea is the common name for insects of the order Siphonaptera which are wingless insects with mouthparts adapted for piercing skin and sucking blood...
s which carry the plague
Bubonic plague
Plague is a deadly infectious disease that is caused by the enterobacteria Yersinia pestis, named after the French-Swiss bacteriologist Alexandre Yersin. Primarily carried by rodents and spread to humans via fleas, the disease is notorious throughout history, due to the unrivaled scale of death...
disease, mosquito
Mosquito
Mosquitoes are members of a family of nematocerid flies: the Culicidae . The word Mosquito is from the Spanish and Portuguese for little fly...
es which vector malaria
Malaria
Malaria is a mosquito-borne infectious disease of humans and other animals caused by eukaryotic protists of the genus Plasmodium. The disease results from the multiplication of Plasmodium parasites within red blood cells, causing symptoms that typically include fever and headache, in severe cases...
, and tick
Tick
Ticks are small arachnids in the order Ixodida, along with mites, constitute the subclass Acarina. Ticks are ectoparasites , living by hematophagy on the blood of mammals, birds, and sometimes reptiles and amphibians...
s which carry Lyme disease
Lyme disease
Lyme disease, or Lyme borreliosis, is an emerging infectious disease caused by at least three species of bacteria belonging to the genus Borrelia. Borrelia burgdorferi sensu stricto is the main cause of Lyme disease in the United States, whereas Borrelia afzelii and Borrelia garinii cause most...
.

The term pest may be used to refer specifically to harmful animal
Animal
Animals are a major group of multicellular, eukaryotic organisms of the kingdom Animalia or Metazoa. Their body plan eventually becomes fixed as they develop, although some undergo a process of metamorphosis later on in their life. Most animals are motile, meaning they can move spontaneously and...
s but is also often taken to mean all harmful organisms including weed
Weed
A weed in a general sense is a plant that is considered by the user of the term to be a nuisance, and normally applied to unwanted plants in human-controlled settings, especially farm fields and gardens, but also lawns, parks, woods, and other areas. More specifically, the term is often used to...
s, plant pathogenic fungi and virus
Virus
A virus is a small infectious agent that can replicate only inside the living cells of organisms. Viruses infect all types of organisms, from animals and plants to bacteria and archaea...
es. Pesticide
Pesticide
Pesticides are substances or mixture of substances intended for preventing, destroying, repelling or mitigating any pest.A pesticide may be a chemical unicycle, biological agent , antimicrobial, disinfectant or device used against any pest...
s are chemicals and other agents (e.g. beneficial micro-organisms) that are used to control or protect other organisms from pests. The related term vermin
Vermin
Vermin is a term applied to various animal species regarded by some as pests or nuisances and especially to those associated with the carrying of disease. Since the term is defined in relation to human activities, which species are included will vary from area to area and even person to person...
has much overlap with pest, but generally only includes those creatures that are seen to be vectors of diseases.

It is possible for an animal to be a pest in one setting but beneficial or domesticated in another (for example, European rabbits introduced to Australia
Rabbits in Australia
In Australia, rabbits are a serious mammalian pest and are an invasive species. Annually, European rabbits cause millions of dollars of damage to crops.-Effects on Australia's ecology:...
caused ecological
Ecology
Ecology is the scientific study of the relations that living organisms have with respect to each other and their natural environment. Variables of interest to ecologists include the composition, distribution, amount , number, and changing states of organisms within and among ecosystems...
damage
Invasive species
"Invasive species", or invasive exotics, is a nomenclature term and categorization phrase used for flora and fauna, and for specific restoration-preservation processes in native habitats, with several definitions....
beyond the scale they inflicted in their natural habitat). Many weed
Weed
A weed in a general sense is a plant that is considered by the user of the term to be a nuisance, and normally applied to unwanted plants in human-controlled settings, especially farm fields and gardens, but also lawns, parks, woods, and other areas. More specifically, the term is often used to...
s (plant pests) are also seen as useful under certain conditions, for instance Patterson's curse
Patterson's Curse
Echium plantagineum, commonly known as Purple Viper's Bugloss, is a species of Echium, native to western and southern Europe , northern Africa, and southwestern Asia . It has also been introduced to Australia, South Africa and United States and is an invasive plant...
is often valued as food for honeybees and as a wildflower, even though it can poison livestock.

The greatest importance as pests (in the order of economic importance) are insect
Insect
Insects are a class of living creatures within the arthropods that have a chitinous exoskeleton, a three-part body , three pairs of jointed legs, compound eyes, and two antennae...
s, mites
MITES
MITES, or Minority Introduction to Engineering and Science, is a highly selective six-week summer program for rising high school seniors held at the Massachusetts Institute of Technology. Its purpose is to expose students from minority, or otherwise disadvantaged backgrounds, to the fields of...
, nematode
Nematode
The nematodes or roundworms are the most diverse phylum of pseudocoelomates, and one of the most diverse of all animals. Nematode species are very difficult to distinguish; over 28,000 have been described, of which over 16,000 are parasitic. It has been estimated that the total number of nematode...
s and gastropods. 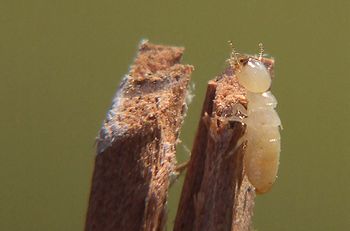 Land snail
Land snail
A land snail is any of the many species of snail that live on land, as opposed to those that live in salt water and fresh water. Land snails are terrestrial gastropod mollusks that have shells, It is not always an easy matter to say which species are terrestrial, because some are more or less...
pests include: 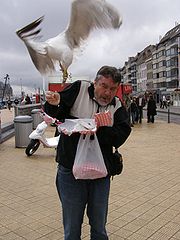